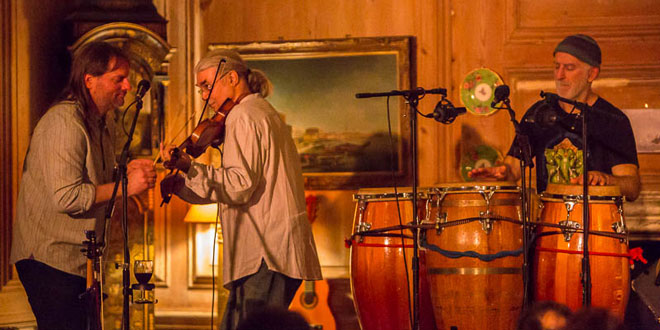 Peter Knight’s Gigspanner started their recent UK tour with a house concert in the beautiful surroundings of Glemham Hall in Suffolk. It was the first time, as a photographer, I have photographed a gig alongside an artist, Malcolm Cudmore. His job being to catch the event in sketch. That possibly sums up productions by FolkEast – they are always just that little bit different.

Since leaving Steeleye Span, Peter has had more time to concentrate on the trio he fronts alongside Roger Flack, on guitar and Vincent Salzfaas on percussion. Having seen him perform in both bands, it is with Gigspanner that he shines and seems extremely relaxed.

“Let’s make beautiful music” he said by way of starting the first of the trio’s two sets. They did not disappoint. Beginning from Peter’s traditional Irish music roots in London, Gigspanner teased us with hints of tunes which we knew, but perhaps couldn’t quite place, played with an intensity that makes their show compelling. “When you played those tunes with the Irish in the pubs back in the 60s and then went home and played those numbers by yourself, you realised that there was something missing.” said Peter.

There are times when listening to Gigspanner that you know you are listening to what many would feel comfortable describing as traditional English folk music – then suddenly you realise it has morphed into experimental Jazz, or you have changed continents and are being entertained in the bayou.

In the haunting “Death and the Lady”, another cheerful number by the group, I found hints of Alison Gross – that screeching yowling bit at the end, but a lot more subtle in “Death”.

Building up “The Bonny Birdy”, Knight drew us all along, explaining how difficult it would be for us to understand some of the Scots lyrics such as “muttle shudders sprang.” In truth this was merely a device for his ‘knights’ joke – thank heavens he sells his services as a musician!

But what of the others? Roger Flack is a rock guitarist, but you would never think it from the subtlety of his playing. Complimenting the fiddle beautifully, his eyes almost always closed, entranced. And then there is Vincent Salzfaas – you would not have thought that the west African djembe could bring so much to these traditional tunes, or perhaps it is all in the hands of Mr. Salzfaas.

The band played two encores – both particular favourites of mine, having grown up listening to them in Dublin. “King of the Faries” first given the rock treatment by Horslips in the 1970s is a classic hornpipe known by many other names in the Celtic world. Turlough O’Carolan’s “Si Bheag, Si Mhor” (Little Hill, Big Hill) was simply a beautiful way to end the evening, a tune that has been passed down to us from the 17th century.

Peter’s gentle delivery makes these performances a joy. It is obvious from his interactions with Mr Flack and Mr Salzfaas, (as they were determined to refer to each other on stage) that as a band, they are very comfortable with their music and in each others company.

Peter Knight’s Gigspanner is a class act – as evidenced by their music and more visibly by the wine glass holders on their microphone stands!

A Live Stream with Armistead Maupin in Conversation with Ian McKellen

A Live Stream with Brit Bennett