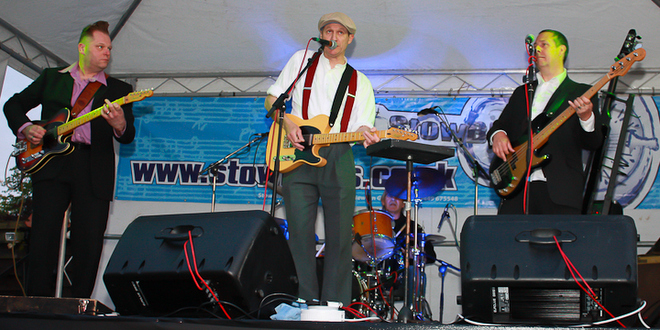 This month Suffolk gets the blues big time. Foz, once dubbed ‘The Mouth Of The Blues’ by former Mean Red Spiders frontman Mark Sharpe, looks ahead to two events in Stowmarket and one in Ipswich, all guaranteed to get audiences jumping for joy.

Each Spring Stowmarket holds its very own blues festival and as ever it’s being held at The Museum Of East Anglian Life. StowBlues2016 takes place on Saturday, June 11 and this year me and my fellow organiser Mike Rushmore have assembled what we firmly believe to be the best line-up in the history of the event.

This time round it’s very much the best of the local blues scene featuring the cream of the cop when it comes to the genre’s finest exponents in our neck of the woods. Mike and I have managed to persuade a good number of East Anglia’s best blues artists to appear.

If you’re into your blues I hope you’ll be drooling at this line-up:

Regular StowBlues festival-goers will notice we’ve gone for an earlier start and that from 8pm the event moves into the barn where some of the region’s finest ales will be dispensed and duly dispatched! This allows England football fans the chance to see the national team take on Russia in the Euros without missing too much of the music on the outdoor stage. For those not bothered about the soccer then it all continues indoors until the usual 10pm finish.

Advance tickets are available at the £5 per person and are available from Stowmarket Tourist Information Centre and online at: www.eastanglianlife.org.uk. You can also get them on the gate on the day and I can’t imagine you’ll find better value anywhere during the busy festival season. A fiver for ten hours of top class blues…now that’s what I call a bargain!

I’ll be your MC on the main stage from start to finish with all the great music outdoors being recorded by my trusty BBC Radio Suffolk colleague David Butcher for future broadcast.

It promises to be quite a weekend in sunny Stowmarket. The night before StowBlues powerhouse Irish singer Kaz Hawkins makes a welcome return to the John Peel Centre. Kaz guested on my Drivetime show recently and impressed me greatly with her enthusiasm for the blues cause. She has a new album out called Feelin’ Good which closes with an awesome version of Willie Dixon’s I Just Want To Make Love To You’. For many, the essential rendition was recorded by Etta James for the Chess label back in the early ‘60s but believe me Kaz’s treatment comes mighty close to Etta’s classic interpretation.

Just when you thought Suffolk couldn’t possibly have any more blues to serve up this month along comes British blues icon Mike Venon and his Mighty Combo. Mike is known the world over for his pioneering production work with David Bowie, Fleetwood Mac, Eric Clapton, John Mayall, Ten Years After, Chicken Shack, Focus and Dr Feelgood to name but a few. What hasn’t been so widely known is Mike’s ability as a singer. He’s a fine performer in his own right and on Saturday, June 18 plays two sets of red hot rocking blues at Venue 77 in Ipswich. Tickets are now on sale from the usual places for a rare visit to these parts by one of the most important figures on the UK music scene. His band includes Steve West Weston, Ian Jennings and Mike Hellier all of whom backed the mighty Mud Morganfield at Ipswich’s New Wolsey Theatre in the autumn of 2014.