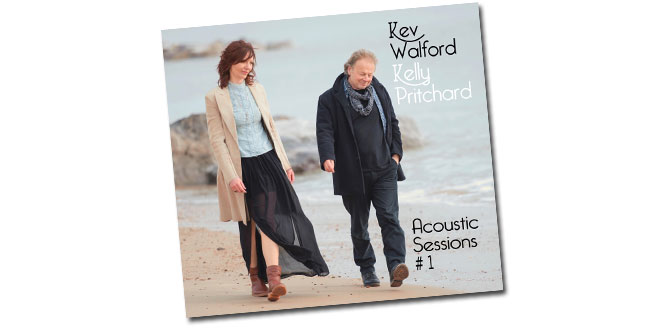 Kev Walford is a singer/songwriter. Originally from Liverpool but now relocated to Suffolk, he’s had major recording and publishing deals in the past. Kev has spent the last year performing, recording and collaborating with fellow singer/songwriter Kelly Pritchard. As well as recently fronting her own band, Kelly who lives in the Woodbridge area also performs under the name of Vocally Vintage. Kev and Kelly’s vocals blend perfectly and they have collaborated on a number of songs of late. The results of this, a five track EP called Acoustic Sessions # 1, has just been released.  Their music and sound has a strong identity, and is a blend of Americana/Country, Cajun and Folk. It’s obvious that they enjoy working together too, as their enthusiasm and humour on stage has a way of really engaging their audience, and always the priority with their live shows is that everyone has fun! BBC Radio Suffolk featured Kelly & Kev recently in a week long session for Stephen Foster and Felixstowe Radio named them Artist of the Month for May. They’ve supported the award winning Russell & Algar for Folk at the Froize, Reg Meuross & Jess Vincent at The John Peel Centre and are currently in the process of completing a further two EPs in this Acoustic Sessions series to be released late Summer. They will continue playing live at venues and festivals across East Anglia over the coming months to promote these further.

Tracks : When The Hurricane Comes/War Of The Worlds/Long Time Comin’ And A Long Time Gone/Kathmandu/Lost My Fear Of Falling

Tess Dunlop and the Bletchley Girls

A livestream with: Elizabeth Day

Oktoberfest at The Mill