This is a wonderful, modern, musical adaptation of this great piece of literature which is over one hundred and fifty years old. Mike Kenny’s adaptation means we meet Alice on exam day, the stress and pressure of failing is building throughout the morning and as the exam begins, instead of turning over her paper she sees her teacher transform into a white rabbit and disappear down a hole and from this point onwards, nothing is any level of normal.

The magic of Wonderland, where Alice follows the white rabbit through the hole is filled with a level of creative bonkers, imaginative surrealism and nonsensical inventiveness which is a constant audience pleaser. We follow Alice on her journey to find the right door to reach the gardens and on the way she meets many characters, such as the Caterpillar and lives in a mushroom field, the who Dormouse who is always sleeping, Tweedledee & Tweedledum who are funny punk rockers, the White Rabbit who is obsessed with time and plenty of other colourful and crazy characters.

The creative nature of the set and props to depict Alice falling down the hole, chasing the White Rabbit, Alice getting big, Alice getting small…so many elements in the story which were imaginative and fun to watch. 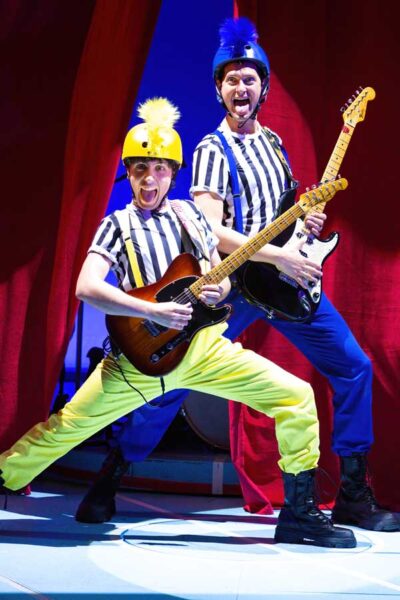 Due to the nature of this story, it gives a huge scope for the level of creativity with the character and how mad and silly they can be. It must be a wonderful experience for the actors. A cast of nine played more than one character each, except Alice, and they were all magnificent, they portrayed every element of humour and bonkers so well. Rosalind Ford was brilliant as The Duchess and in the lobster dance.

Special mention to Beth Mabin who only stepped in to play Alice three days (!) before opening as COVID struck down the original lead. Beth was marvellous.

Oh yes, I nearly forgot! It’s a musical so plenty of great catchy songs throughout and the cast also play the instruments as well as sing. I tried to count the number of different instruments they were all using, I think I got to thirteen but how it was all integrated into the show was brilliant.

In truth, there are so many elements to talk about with this production as there was so much fun going on and I haven’t even mentioned the audience participation. The Director (Emma Earle) calls it ‘Magnificent madness’ and it really is. This is a highly-recommended family show which keeps your eyes filled with wonder from start to finish.

WIN TICKETS TO SEE ‘Legend – The Music of Bob Marley’