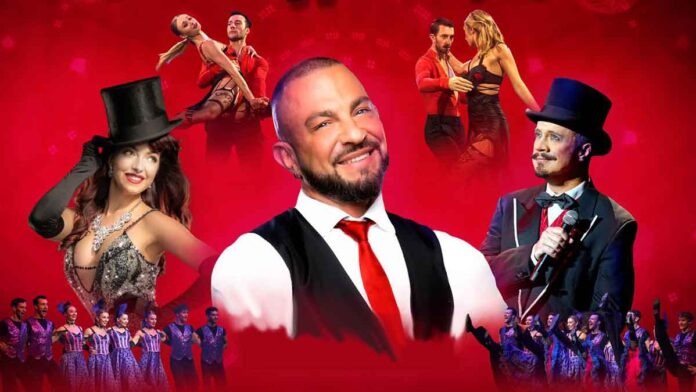 One of the nations best loved Strictly Come Dancing professionals is coming out of
retirement to star in ‘Come What May’, one of the UK’s most exciting theatre productions
touring across the UK in Spring 2022.

Travel back in time as the children of the revolution take you into the sexy and glamorous
underworld of Paris at the Moulin Rouge. Journey into the flamboyant world of Elton John,
delve into the imagination of the original showman P.T Barnum and finally head to the bright lights of Los Angeles before exploring the glamour of Sunset Boulevard’s Burlesque Lounge.

This musical extravaganza is packed with timeless classics from the movie Moulin Rouge
including Come What May, Your Song, Diamonds Are A Girls Best Friend, Roxanne and Lady
Marmalade as well as featuring hits from other iconic movie musicals including Come Alive,
Saturday Night’s Alright, Shallow and Show Me How You Burlesque.

This ‘Spectacular, Spectacular’ all-singing, all-dancing show is an unforgettable combination
of dreams, adventure and above all – love!

The show is currently on a major national tour with Britain’s Got Talent winner Jai McDowall, which started in September 2021 and played across the UK including Mercury Theatre Colchester, Mayflower Theatre Southampton, New Theatre Royal Lincoln and Buxton Opera House where it will take a break before continuing in January with Robin.
Robin Windsor.

Robin Windsor is a British Professional Latin and Ballroom Dancer, best known for his
appearances in the BBC television series Strictly Come Dancing. Robin is arguably one of the most recognisable faces on Strictly Come Dancing, during his time on the show he partnered Anita Dobson, Patsy Kensit, Lisa Riley and Deborah Meaden. On Strictly he danced alongside stars such as Neil Diamond, Rod Stewart, and Alice Cooper, Katherine Jenkins to name just a few.

Tickets are on sale NOW www.comewhatmayshow.com