Antigone is an ancient Greek tragedy – written by Sophocles in 442 BC and deals with grief, civil disobedience and making a choice between family and state control with very tragic repercussions.

The story: Two brothers, Eteocles and Polynices, both die after fighting each other for the throne after the death of their father, Oedipus. The new leader of the city is a strong woman, Creon, who firmly believes in rules and social laws to keep the city together and to move forwards after the recent civil war.

Creon believes Polynices was a traitor and his body should be disgraced and hung in view of the city as a punishment, while Eteocles has a state burial.

The sisters Antigone and Ismene of the two dead brothers go to the funeral and while Creon is giving a state address, Anitigone is distraught and steals the body of Polynices to bury him and honour him. Ismene tries to convince her otherwise as it is against the law and she will be killed for such an act.

Antigone doesn’t adhere to her sister’s pleas, she believes the only right thing to do for your family is to honour the dead, so she summons the strength of the Gods to take the body and bury it in the ground. 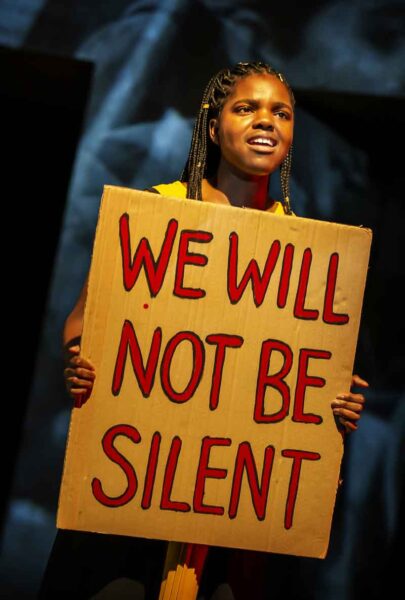 Creon finds out and is furious at this disobedient act, especially as she is part of the leading family (Creon is Antigone’s aunt) and all are supposed to be representing the city and all it stands for. Creon dishes out the punishment by putting Antigone in a cave with only a meagre amount of food.

Haemon, not only Creon’s son but also betrothed to Antigone, has been a strong loyal supporter of his mother and her leadership, but is outraged and after a bitter argument storms out and vows never to see Creon again.  He runs to see if he can save Antigone.

There is civil unrest as the city’s population learns about Antigone. Tiresias, the prophet, attempts to advise Creon about her actions and how the consequences will not be kind to her and her leadership.

Creon is torn between morality, the duties of leadership and loyalty towards family – she makes her decision but is it too late? Is family loyalty above the laws of the city?

This adaptation brings this story to the ‘here and now’ to a point where it is timeless and global. There are strong female leads and it explores the concepts of how to make difficult choices of morality and values within society where each side has equal weight.

There is a lot of drama, death and grief in this play – it is a tragedy so we are not expecting slapstick, regardless the five excellent cast members portray their characters’ grief, rage and passion exceptionally well.

Merlynn Tong’s adaptation also includes five songs, sung by Ismene.  No, it’s not a musical Greek tragedy, the songs are powerful additions, perfectly timed to add to the emotional impact of the story. The melancholic, haunting yet soulful tones of Francesca Amewudah-Rivers sent chills up the spine.

Antigone is at the Mercury until 16th October.

You can read our interview with Wendy Kweh here.