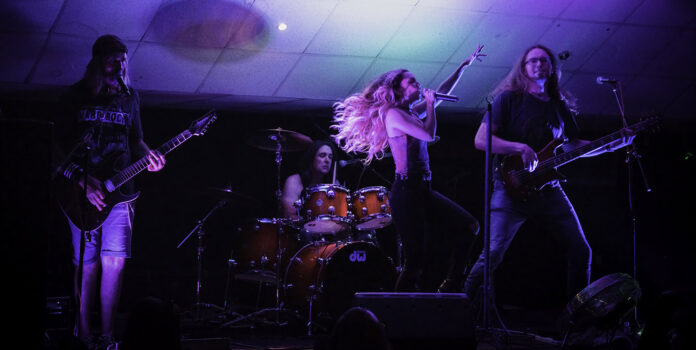 Are we ready to rock? I said are we ready to ROCK? A little pocket rocket gorgeous slip of a woman got on stage with 3 burly musicians…… it was amazing! A great combination of musicians: a way too relaxed drummer, an understated bass player and an old school rock guitarist – each great players in their own right, put them together and you have a rock band which can rock all night, and more. Add in Mecia as front woman and you have all you need. Her personality and energy were oozing from her as she belted out the tracks. A large number of tracks from Bon Jovi, Queen, Fleetwood Mac, Wasp, Skid Row, Anastatia, Foo Fighters. The choice of tracks were clever, well chosen to entertain the crowd. There were a few mini-medleys which was a good touch to get through songs.

It was a super cracking night, everything was superb and we all went home utterly happy as the music had recharged our veins.

Support was Painting The Silence: a piano (Patrick) and vocals (James) duo. These guys were interesting and I liked everything about them even though it wasn’t ‘party whoo hooo’ music. Let me extrapolate….it was more bitter sweet melancholic indie, sprinkled with a bit of classical, however it was completely engaging. Pat, a trained pianist, was playing wonderfully and super pleasing to be able to hear all the notes as part of the song rather in the background. James had a great tone to his voice which drew me in almost from the start. Very eloquent yet indie and some enunciations were super cool which added to the expressive bitter sweetness. They played a bunch of moving and absorbing originals, and a couple of crowd pleasing covers. Patiently waiting for their album to be released.