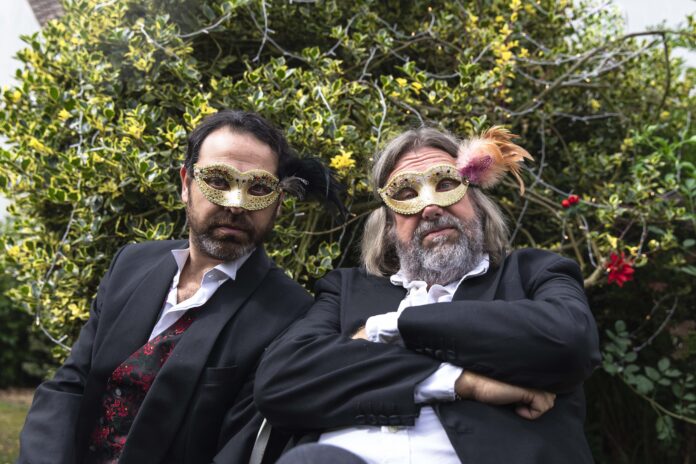 Belshazzar’s Feast is comprised of Paul Sartin (vocals, oboe, violin and swanee whistle) and Paul Hutchinson (accordion), and together they are a wickedly-inventive and beloved folk duo. Together they have entertained audiences across the UK, Australia and beyond with their eclectic and eccentric mix of tunes, songs and chat that sends audience’s home with a smile.

Currently, they are celebrating their 25th anniversary in music and putting together a new album and scrapbook looking back over their career together; we caught up with the pair of them to see how they have navigated life as musicians in the past year, and what fans can anticipate going forward.

Firstly, just tell us a bit about yourselves…

Paul Sartin: Okay, so we’re Belshazzar’s Feast, which is me, Paul Sartin, and Paul Hutchinson. We’ve been doing it for approximately 25 years – so long we can’t even remember exactly how long, but it’s around a quarter of a century! Obviously we haven’t been gigging for the last year, but we are starting to tour again in May and June this year, so in June we’ll be coming over to East Anglia a couple of times.

How would you describe your music?

Has music always been in your lives and what inspired you to get into music?

Paul Sartin: Yeah, I think we’ve both been making music since we were kids. Our parents, Paul’s father and my mother were both musicians. Bizarrely enough, we both use to play organ in chapel in our teens; so yeah, it’s been in our lives all the time. Not always professionally, but it has been professional for the last 25 years… which is amazing as I’m only 30 years old!

Obviously, we know it’s been hard for many musicians during the pandemic, but how have you been keeping busy during the past year?

Paul Hutchinson: Well, luckily Zoom came along at the right time. We’ve done teaching and a few concerts over Zoom, and in the midst of it all, I managed to do an album using a lot of musicians from around the world who are also out of work. I would send the music to them, they would record it and send it back, and then I put the album together like that.

Paul Sartin: Yeah, I actually think lockdown has encouraged quite a lot of collaborative work. I’ve been working with singers and instrumentalists in Italy and in Canada, and I think that sort of thing wouldn’t have happened had lockdown not taken place, so we’ve made the best of it.

Paul Hutchinson: Absolutely. I was doing a Zoom Ceilidh the other day with a group of classical musicians, and it was quite interesting because there was someone from Greece and someone else from Canada, and we were saying that pre-lockdown it would have been foretold to put these different countries together. I also teach a group of Australians every month, which is quite interesting because for them it’s seven o’clock at night, but for me it’s eight o’clock in the morning. Particularly noticeable in winter when it was dark at 8am, but they’d be in swimming gear because it was hot and drinking wine because it was 7pm. It has been quite amazing for that, but it doesn’t beat live gigs.

You mentioned briefly earlier that you’re celebrating your 25th anniversary in music this year. Can you tell a bit about the plans that you have for that?

Paul Hutchinson: Well, this tour that would have been entirely in May has been moved into late May and a bit of June. We’re doing some festivals in between, then the Christmas show. The May tour was going to be the last one, but because we lost last year’s tour everything got shifted on a year.

Paul Sartin: We’re putting out a compilation CD of some of the best of our hits from all of our albums. We’ve got about 10-12 albums, so we’re selecting highlights and adding a few new bonus tracks that we’re in the middle of recording at the moment. We’re also bringing out a book to go with it. We’ve got an archive dating back 25 years, with photographs, letters of complaint, notes and all sorts of stuff, so we’re going to put a scrapbook together.

That sounds great. You touched on it briefly, but how have you found the move to digital, with virtual gigs? Do you think it’s a positive thing for the industry?

Paul Sartin: I think it’s a mixed blessing, as Paul said there’s no replacement for live music, but I know that in the classical and pop world, before lockdown even happened, a lot of stuff was going online, such as operas being shown at cinemas and people doing virtual gigs. So, I think people had already been talking about it, but this just gave us a kick in the pants to get on and work out how to operate in the digital realm.

I think the benefit, as you’ve been saying, is being able to work with people from all over the world. I can’t see us completely going back to the way things used to be; I think it’s going to be hybrid. People will still thirst for live music, but I think we’ll probably do more digital stuff as well, particularly as Paul’s been doing work with people in Australia, which presumably you’ll carry on with?

Paul Hutchinson: Yes, I will actually. That all came about because the Australia national festival was cancelled, and the people I was supposed to be playing to in Townsville asked if I’d mind doing an online concert and some teaching, so it evolved from there. I see no reason why that can’t continue for as long as I feel like doing it. I have two groups in America as well, which is the same idea, so it has opened some doors.

That’s great. You’ve also got your tour coming up, so what have you missed most about the live gigs, and have you been to this area before and played at any of these venues?

Paul Sartin: Yes! It comes to the Cambridge Junction on the 1st of June, and we have played there before, and then we’re coming to Suffolk on the 13th June to Folk at the Froize, which is in Chillesford, but we’ve not done that one before I don’t think. The Cambridge gigs are always quite nice, and there’s a very good takeaway opposite.

Actually, I think we both missed that interaction with people because we really rely on the audience’s reaction at gigs. There’s no ‘them and us’, its very informal, and when we are doing gigs online it’s really difficult because things don’t get that same reaction. You don’t know whether you’re doing things right or wrong. What I haven’t missed though is eating service station food with pasties and such, and sleeping in a different bed every night.

Paul Hutchinson (jokingly): Yeah, and I miss the traffic on the M6 – particularly on Fridays…

While we await the return of those gigs, what do you think music fans can do to keep supporting the industry?

Paul Sartin: The music industry was worth billions and billions of pounds, so that should be reflected in investment and help from the powers that be. There have been grants, but to be honest if this was banking or arms or something, there would be so much more money being poured into it. That’s really quite urgent, and I know that the chancellor is being lobbied almost constantly by The Musicians’ Union and other industry bodies to address this problem. But I think Grass Roots venues are going to suffer the most because with places like opera houses, they will get funding and corporate sponsorship; but the gigs we rely on, such as the small arts centres and the pubs that do music in back rooms – those are a natural home for a lot of folk music. I think they’re really going to struggle to start again and have things on the level they were before.

I think that’s all. Is there anything we’ve missed?

Paul Sartin: Yeah, that’s been an issue. I can’t wait to go to the hairdresser! I’m going on Monday. I live opposite a barber. Ironic that I moved house in November opposite my barber, and it’s been shut for most of that time; but on Monday morning, I can see the barbers from my study window, and the minute they’re open I think I’m going to just dash over the road, and hopefully not get knocked over…

I think a lot of people will agree with that one! Thanks for your time guys.

Their May and June 2021 tour is going ahead with a mix of socially-distanced indoor and outdoor concerts, with an opportunity to watch a live stream concert from home too. They will be at The Cambridge Junction on Tuesday 1st June, The Froize, Chillesford on Sunday 13th June (Outdoor Marquee), and at Colchester Arts Centre on Monday 29th November.

For more information or tickets to shows visit www.belshazzarsfeast.com. You can also find them on Facebook and Twitter.