Back in The Portland Arms in Cambridge for the second week in succession for Heat 2 of the Cambridge Band Competition. I am quite enjoying covering these competitions for Grapevine Magazine. It gives me an opportunity to hear bands that wouldn’t normally show on my radar.

The week’s heat was a Peterborough heavy contest with some interesting performances, to say the least!

First up were Call to the Faithful whom I had just seen the week before at BurySOUND.  I quite like the sound and energy of this four-piece band whose hard man stage image belies the fact that off stage they are really nice guys.  Their final song ‘We Are Animals’ is becoming a bit of an earworm.

Dressed in what looked like a white lab coat and wearing a tin foil mask with wrap around visor sunglasses, Vulgarithm took to the stage next. Andy ‘Dirt’ McGurk plays guitar to a backing track of riffs and club classics all in front of a screen projecting, for the most part, himself.  He is totally over the top, completely unique and a real challenge to photograph given the back lighting!

Slava B came to stage next dragging a blood-stained doll by the hair… OK, that got our attention.  This guy has one of the best guttural metal voices I have heard in a long time and would not be out of place fronting a heavy metal goth band.  Indeed, headbanging to backing tracks did look a little odd but no odder than the three foot tall blood stained manic looking blonde doll on stage! 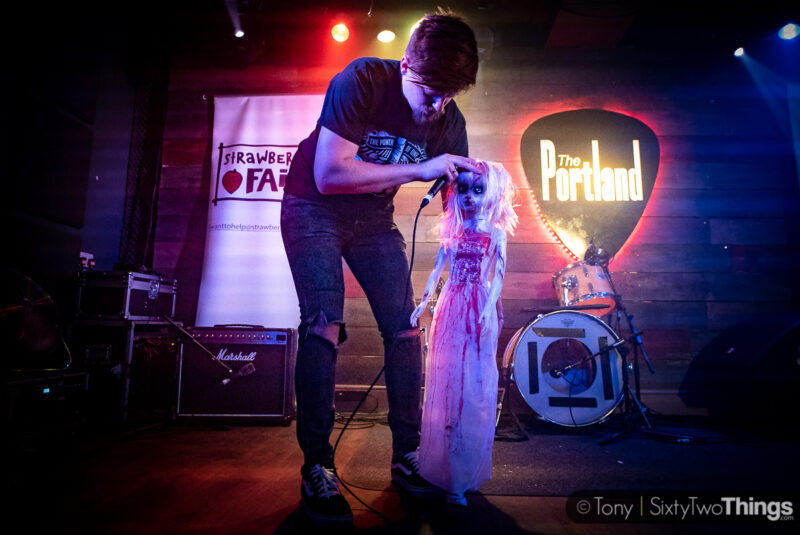 Peterborough based Scumbus brought us back to earth with what they themselves describe as DIY Punk.  One of their Facebook reviewers described them as “..young lads playing as if it was 1977” and I would not dispute that. They obviously enjoy playing to a live audience and probably should get an award for playing the most number of songs in the time allowed.

Finally, we had Carbon Daydreams play for us.  Again, we were treated to something totally different, this a fresher, lighter sound of 90s indie pop.  With some excellent guitar work going on, added to catchy up-tempo lyrics, it was an uplifting note on which the judges left to deliberate the result.

We had had five excellent and diverse performances, but the winner was Vulgarithm who joins James White & The Wildfire in the final at Cambridge Junction on 5th May.

(Total aside: One thing you learn when driving around Cambridge is to look out for unlit kamikaze cyclists with scat regard for their own safety. I wasn’t expecting to find an unlit bike travelling along the A14 on my way into Cambridge!)

WIN TICKETS TO SEE ‘Legend – The Music of Bob Marley’