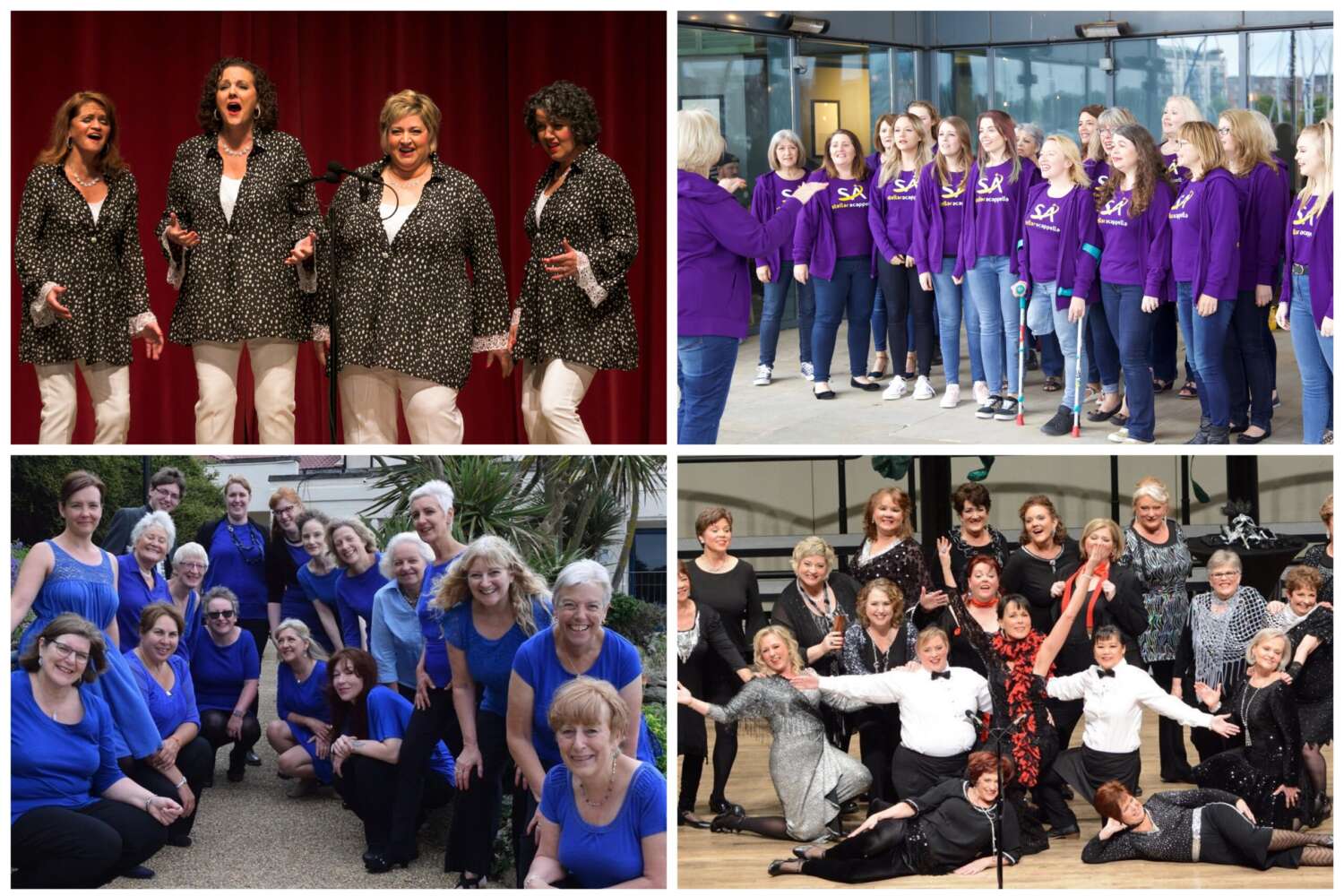 Lockdown has been tough on musicians as they’re unable to perform live to an audience – something that most thrive off. However, Chandra Grover is a local musician, based in Trimley St Martin who loves rock, pop, jazz, blues, and classical music. She also teaches piano and clarinet and is the musical director of Felixstowe Harmonies – and she has turned this challenging time into something positive.

Her original song ‘Across the Borders’ was created in March 2020 as a release for Felixstowe Harmonies but less than a year later, the single really has crossed borders in an exciting collaboration and barbershop style reimagining between four vocal groups, including two of Suffolk’s own and two from the USA!

We recently caught up with Chandra to learn more about her life with music, how she and the many groups she’s involved in have been keeping busy throughout the lockdowns and how this song and collaboration came around.

Chandra started Felixstowe Harmonies around 10 years ago, she explains “I had little concerts for my younger students once a year and the children would sing, but then some of the mums and grandmas wanted to join in and so over the years the children’s choir turned into the adult choir it is now, which is Felixstowe Harmonies.”

Away from that, she has been part of many different projects, including teaching and writing music. She was the bass player in a rock band called Mantis (with her brother Jon, sister Carolyn and niece Jackie) for a number of years, is a member of Essentially Swing (which is run by her sister Carolyn), and she also leads and plays in a clarinet group called Java Junction with some of her adult students. She plays clarinet in the Community Light Orchestra and runs two choirs – one being Felixstowe Harmonies, and the other being the Birkbeck Singers. Chandra also sings with Stellar Acapella, an Ipswich based female a capella group singing in four-part harmony. There’s plenty to keep her busy!

Chandra adds: “People say ‘well what do you do all day?’ so I say ‘I spend time in my music room, dreaming up all sorts of projects’, I’m very lucky.”

With her family being passionate about music too, it shouldn’t be a surprise to know that Chandra has lived and breathed music her entire life. Chandra exclaimed: “When we were young and at home, my parents always encouraged us to learn an instrument or two. There was always music about the house. My mother was a pianist and I would spend hours listening to her play. I remember the day my father brought home a clarinet and we all (my brother and sisters) tried to get a sound out of it. As I was the only one able to get a note to sound I was sent to music lessons! That was the start of my musical journey. We were very much encouraged by our parents to pick up and have a go with any instrument.”

Lockdown has understandably been a challenge to us all, as Chandra says: “When we first went into lockdown in March last year, it felt like everything had stopped for everyone. All the interesting things we like to do and the creative groups we were a part of just clamped down overnight, it was such a shock for everybody.”

That said, Zoom has been a saviour for many – and Felixstowe Harmonies is no exception! On one of the first Zoom sessions, the singers were having a chat and discussing how they couldn’t see family and talking about being lonely and isolated; so Chandra suggested they turn it into a creative outlet. She asked them to send lyrics or individual words of what they were thinking and feeling and she used the submissions to create a song which was recorded by the singers while in lockdown. A video was produced and the song released in April last year.

The song found new life following a short series of events, which led to it landing in the hands of Patti Burklund, who sings with PrimeTime Quartet, ranked one of the top female quartets in the world. Patti reached out and asked if Chandra would arrange it for barbershop, which she was delighted to do. After a few tweaks, they eventually ended up with a score that everyone involved was pleased with.

Chandra explained: “We then thought, ‘how do we bring this to life?’ so we decided to record it and produce a video. It was now in the latter stages of the project and we were keen to involve Ipswich choir Stellar Acapella, and Song of Seattle, that PrimeTime Quartet sing with; giving us two US groups and two UK singing groups!”

During the early stages of the project Chandra and a small group from Felixstowe Harmonies met PrimeTime Quartet online, initially to make that first connection and talk about the project. All other discussions were held over email and because of the 8 hour time difference things took a little longer than usual. But there was no rush, and the team were all enjoying the collaboration and focus on getting the vocal score finalised.

Chandra explained: “It just developed and unfurled in a very nice organic way, I think that was what was nice about the project. I couldn’t believe that PrimeTime Quartet asked me to arrange the song for them and they are a really fantastic group of women, perfectionists and masters of their art in the fascinating world of barbershop singing. It was a perfect collaboration. It has created those connections and friendships that otherwise would not have happened, and I have Liz Rastrick, Trimley St. Martin Village Recorder to thank for sending the original song to Patti”.

In a clip Chandra sent us, Patti adds “What is remarkable is 65 women from two countries, separated by thousands of miles, accomplished this project in a mist of a global pandemic and isolation; and what has evolved goes far beyond the musical product as we have forged friendships to last a lifetime”.

Below is the ‘Across the Borders’ video with a sneaky behind the scenes look at the process, Chandra added: “If you go to the end of the video and the song, there’s a little backstory after the credits of how it developed from the American point of view. The sheet music is available on sheetmusicplus.com, listed on there as female barbershop.”

Despite the challenges the music industry is facing, we asked Chandra what the positives are of this time and what she hopes the future might hold, she expressed: “I think people have upskilled because of it! For example, the singers have never had to send me their vocal tracks for mixing but I think that will continue. And I’m sure we will meet online occasionally. We usually hold 2-3 fundraising charity concerts every year for local charities, and that will continue because there’s nothing like the face-to-face delivery of music. And now that we are used to new technology I’m sure we will continue to record songs and produce videos like Across the Borders”.

In addition to the ‘Across the Borders’ project, Felixstowe Harmonies have been keeping busy in many other ways too; during lockdown in May last year, they also recorded a Queen song (Teo Torriatte) with the Suffolk Constabulary Male Voice Choir run by Chandra’s sister. Over the festive period they held a Christmas Concert via Zoom, inviting friends and family – with about 70 people online!

Chandra added: “We’re still working! We’re still on Zoom and we’re still learning songs so that we can be ready in no time at all to actually get out there and entertain. The choir is working hard, and there’s lots going on!”

During this time of lockdown, it’s important we keep supporting our local artists, Chandra suggested: “Go searching! If you want to be entertained, there is so much online. Apart from this lockdown that we’re in at the moment; there have been small groups of musicians meeting and small audiences allowed. People will always be making music and people will always want to go and listen. Keep your eyes open, it is there.”