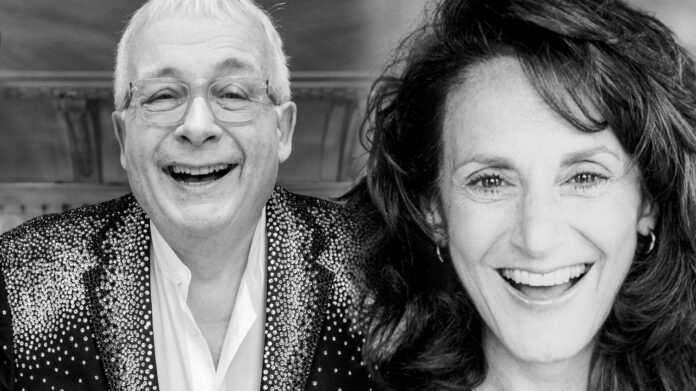 Thursday 1st July will see the multi-talented Christopher Biggins having a good old chin wag with his gal pal Lesley Joseph, best known for her role as Dorian Green in Birds of a Feather, on stage at Theatre Royal Bury St Edmunds in a special fundraising event for the theatre. Join them for a raucous evening of conversation and stories about their lives and work.

In addition to being on stage (with a live audience), the event will also be live streamed via Zoom.

Christopher Biggins hosted Theatre Royal Bury St Edmunds The Love Gala in 2018.  From Porridge to I’m A Celebrity, Christopher Biggins has graced our screens for over thirty years. This hugely talented actor, humourist, writer, general raconteur and popular Pantomime Dame counts the world’s most glamorous stars as his best friends and brings his own inimitable sense of humour and warmth to any production. Christopher appeared on ITV’s primetime hit show Gone to Pot, Channel 5’s Five Celebrities Go To Lapland, Celebrity 100% Hotter and is a regular on The Wright Stuff. Biggins was a regular panellist on BBC2’s Debatable, was a special guest on ITV1’s Live at The Palladium, won thousands for charity on DAVE’s Celebrity Storage Hunters and voiced Channel 5 panel show It’s Not Me It’s You. Christopher won over a whole new audience when he was crowned King of The Jungle after winning series 7 of the hit ITV1 show, I’m a Celebrity Get Me Out of Here but his career began many years earlier.

Biggins started his training at Salisbury Repertory Theatre and later at Bristol Old Vic as a prelude to his first West End appearance – creating the role of Head Jumbly in The Owl and The Pussycat Went to Sea. Other theatre work includes a National tour of Side by Side by Sondheim, Beyond The Fringe, A Touch of Spring, Cluedo and On Approval. In the summer of 1990 Christopher played and sang the role of Herod in Jesus Christ Superstar at London’s Barbican Theatre.

Lesley is best known for playing Dorian Green in the television sitcom Birds of a Feather from 1989 to 1998, and again from 2014 to 2017. Other television credits include Absurd Person Singular (1985) and Night and Day (2001–2003). Her stage roles include UK touring productions of Thoroughly Modern Millie (2005), Calendar Girls (2011) and Annie (2015). In 2018, she was nominated for the Olivier Award for Best Supporting Actress in a Musical, for the original West End production of Young Frankenstein.

Lesley is great mates with Biggins so we’re in for a real treat with this pairing!

This event is part of Theatre Royal’s Spring Season sponsored by Ellisons Solicitors.

This is a fundraising event in support of Theatre Royal Bury St Edmunds (Registered Charity Number 242977).

Tickets to attend in person at Theatre Royal can be booked on Theatre Royal’s website: theatreroyal.org/shows/an-evening-in-conversation-with-christopher-biggins-and-lesley-joseph.

The live stream is in partnership with, and booked through Theatre Tokens and can be booked here: theatretokens.com/buy-now/events/christopher-biggins-and-lesley-joseph-in-conversation.aspx

As the theatre recovers from the effects of 12 months of closure the staff team, and particularly Box Office continue to work reduced hours so for the moment the Box Office cannot accept incoming telephone calls and booking will be predominantly online at theatreroyal.org.

The Box Office is available to help with any queries, including audience members with access needs or those requiring assistance, by emailing booking@theatreroyal.org.