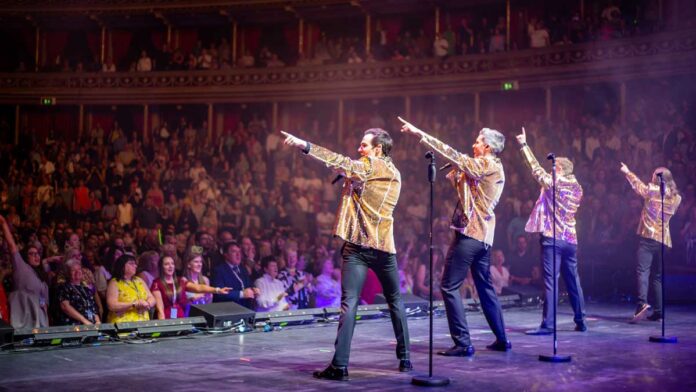 The World’s most successful musical theatre vocal group, COLLABRO will embark a massive twenty-three-date Greatest Hits tour this October and November 2021. The tour will kick off in Sheffield at City Hall on Saturday 9th October and will run until Saturday 6th November at Blackpool Opera House seeing them perform some their most memorable tracks including ‘Stars’, ‘Bring Him Home’, and ‘Defying Gravity’.

The group – consisting of Michael Auger, Jamie Lambert, Matt Pagan and Thomas Redgrave – met for their first rehearsal above a pub in London Bridge back in 2014, soon after they auditioned for ITV’s Britain’s Got Talent, and a month later received a full standing ovation from all four judges and the full audience at the Hammersmith Apollo. This month Collabro celebrated seven years since their audition aired to millions of viewers across the UK. They went on to win the competition with one of the highest voting majorities of any series, and their debut album Stars went straight into the UK album charts at number one, was quickly certified gold, and became the fasting selling album of 2014.

Last year, Collabro released their album Christmas Is Here comprising of a range of festive classics and original track, the titular ’Christmas Is Here’, which saw them team up once again with Ben Adams from A1.

The boys have also been keeping very busy during lockdown. Collabro’s Patreon has seen the boys create a space to bring fans (Collaborators) and the band closer together. From exclusive performances to Q&A’s, live cook-alongs to game nights, it has been THE place for exclusive access and content.

After going from strength to strength with five top selling albums, four sell-out UK tours, two US tours, headline slots at the London Palladium, Wembley Stadium, the O2 arena and the Royal Albert Hall, this summer will see COLLABRO performing In The Park with Katherine Jenkins in July, at Sound On The Ground in Blackpool this August and will be performing with Alfie Boe at Trentham Live this September before embarking on their major headline tour for the autumn.

Tickets for the tour are onsale now from www.gigsandtours.com / www.ticketmaster.co.uk. VIP packages are available now at http://SJM-VIP.com.