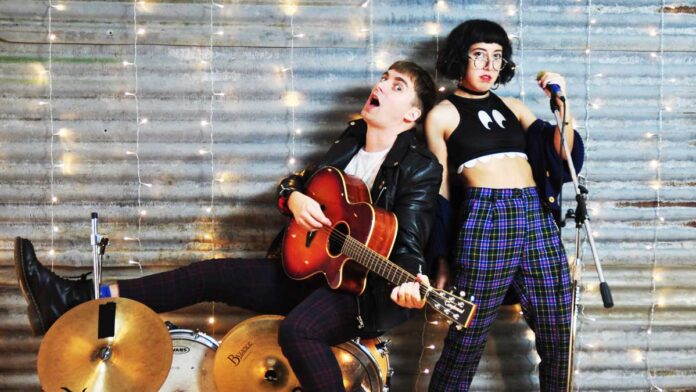 Indie duo based in rural Cambridgeshire, Collars, is comprised of Dan and Kane. In their own words, ‘one sings, and one plays guitar and drums at the same time to create wholesome indie like your mama used to make – if your mama was Florence Welch and your grandparents were the White Stripes.’ We caught up with the pair to see how they have navigated through the past year and what the future holds.

Firstly, let’s have an introduction. Tell us a bit about yourself and your music….

Kane: I play drums and guitar at the same time, or try to at least, and Dan sings and plays synth. We’ve been a band for a couple years now. There was a little bit of a development stage, we did the Cambridge open mic scene and we had just started gigging before lockdown, so we’ve been pushing as hard as we can by doing recordings and live streams.

Dan: We were a different incarnation of Collars for the first year, and then in 2019 we decided to go in this direction that we’ve gone now with the feet drums. We were trying to get other people to join the band initially, but we made it work with just the two of us.

Kane: The songs we had put out that were getting good responses were more in the realm of me playing acoustic and Dan singing, so we started doing open mics, but there was one particular event where we got completely drowned out by the noise in the pub so, as I’m a drummer, I thought ‘if I could just bang something simple underneath they’d have to listen to us!’ So that’s how the drum sound developed.

What inspired you to get into music, and has it always been part of your life?

Kane: For me, yes. I started playing drums about age 11/12. I remember listening to a Jimmy Eat World record and there was this bit that made me just want to jump round my room. I was convinced it was the guitar, but the more I listened, the more I realised it was when the drums came in hat had me hooked. I ran downstairs like, ‘Mum I want to play drums!’ At first she said ‘no, definitely not’, but then we agreed that I although I couldn’t have a kit, I could have lessons if I wanted. They have always been amazingly supportive, but it was years until I realised how loud the drums were and how much they were putting up with! They were brilliant in that sense.

I met Dan through a mutual friend of ours and I had this idea that if I could get her to sing she’d be the perfect front-person. I approached her about it and she was interested, but she’d never properly sung and couldn’t sing in front of me at all. It took a little coaxing and time to get her to sing to me, but she did. We kept writing together and she’s such a good songwriter. I was blessed really, I thought I was going to get an average singer who looked really great, but I’m extremely fortunate enough to have a great singer, who’s also an incredible songwriter.

Dan: When I was a teenager I did attempt to play the drums, but I didn’t get very far. If I can’t do it straight away, I get annoyed and am like, ‘I’m not doing it anymore!’ Kane is probably the biggest reason why I’ve kept on singing because he’s there saying ‘come on we’ve got to do this, we’ve got to practice and get better’. In fact, I didn’t play synth or anything before – he’s been teaching me. I take everything in musically and love all kinds of music, and Kane is like that too, I think that’s why we work so well together as a band.

Obviously this past year has been particularly hard for musicians, so what have you been doing to keep busy and how have you found adapting to the digital elements of the past year?

Dan: Everything and anything we can possibly think of! We were doing lots of open mics pre-pandemic. At the end of 2019/early 2020 we had just started booking proper gigs. We had a year booked with small summer festivals and various gigs, then obviously they all got cancelled and we were like ‘what do we do now?’ So when livestreams started happening, I said ‘we’ve got to get on these line-ups’, so we did loads in the first lockdown, to the point we got a little bit weary of the livestreams!

As soon as we were allowed out again, we did do some socially distanced shows which were nice. We had a couple at the Met Lounge in Peterborough and we did a festival in Stratford-upon-Avon. To be fair, I would definitely take socially distanced gigs rather than no gigs now, because having anybody in front of you and being able to work off that energy is so great.

Kane: They’re difficult because not only is there no interaction with the audience, but you can’t record it properly either. If we pre-record something, I can get it up to a reasonable standard, but there are only a few ways that you can plug everything in and get it to livestream and it just doesn’t sound right with the drums, guitar and all that going on. It’s been difficult, but we’re grateful that we were asked to do the ones we did.

Dan: Basically we’ve taken this year to really hone everything: our recording, the producing, the performance, the live shows… Hopefully when we are allowed out again, we’ll be a lot better than we were this time last year!

I believe you have a new single and EP coming soon, so can you tell us a bit more about that?

Dan: Sure! We released our first single ‘Heart Beats’ at the tail end of last year, which was one of the earliest songs that we wrote in this new incarnation of Collars. We’ve now added the electric guitar on ‘Heart Beats’ and our whole sound is bigger and a bit more indie band sounding.

The new single coming out in April is called ‘Hey Lizzie, Lay It On Me’ and it’s a song I wrote for my best friend. The story isn’t something that’s happened to us – I think her partner would have an issue with that because it’s about a dude leaving a woman for someone else and I’d like to make that clear he hasn’t done that! But the whole point is that you can lean on me, I’m here for you. There are so many love songs out there and I thought there aren’t many songs out there for your mate, that person who is just so close to you they’re basically family. That’s what it’s about and that’s going to be on our debut EP, which is called Everything Present 1 and comes out in July.

We touched on it a little bit, but what do you hope for the future of the music industry? For example, do you think there will be more virtual gigs, or stay socially distanced for a while and phase back in…

Kane: There’s something about that symbiotic sharing of a moment through music that, for me at least and I think for a lot of people, transcends almost any other experience. We’ve realised how lucky and privileged we are and how special those moments are. People are so hungry for it and tickets have already sold out for the big festivals.

Dan: If it were up to me, we’d dive straight back into normal gigs, but it’s not up to me and that’s probably a good thing! Even if it’s socially distanced, I’m ready to get back to that. I think everyone in the industry is ready to start attacking it again, we just need the green light and then we can all start planning again.

Until we get those gigs back, what would you advise music fans can do to keep supporting the music industry and independent artists such as yourselves?

Kane: If there are smaller bands that you like – buy their records and purchase MP3s. We’ve been having discussions about streaming recently and I think the industry can work towards making it fairer. Especially for upcoming musicians because you have to give young people the incentive to want to create.

If you’re going to make art you’ve got to love it. Like all industries, you need to incentivise people to keep that productivity up, and it’s easy for the labels to say ‘no, this is the way it is’, but they would have to make very few changes to actually start to give people a bit of revenue. From a person-to-person perspective, obviously social media is a massive thing now, so go on there, like the page, follow it, share it… And buy the music where you can.

Dan: Yeah, the basic free option for fans is if you like a band or you’ve seen or heard of a local band then like and follow all their pages because that really helps with the dreaded algorithms. I hate that it’s a thing but it is, and if you want to get higher up the searches or suggested artists, then you need to have some sort of following and you’re not going to appear unless other people are backing you. Also, if you don’t want to spend any money, as well as following and commenting on your favourite artists’ pages, stream their music as much as you can, that’s definitely a big help.

For a fun one to end on, if you could collaborate with any artists dead or alive, who would it be?

Dan: Alex Turner (front-man of the Arctic Monkeys) and Damon Albarn. Those are my two!

Kane: Oh gosh that’s a tough one, but John Lennon and John Bonham, let’s go for those two.

Thank you again to Collars for chatting to us – we look forward to the new releases. You can find out more about Collars at collarstheband.com.

The second single ‘Hey Lizzie, Lay It On Me’ is out on April 23rd, and the EP ‘Everything Present 1’ is due in July.