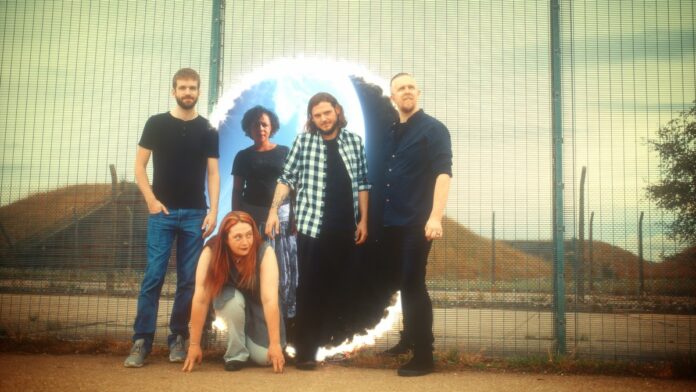 Danny Sorrell is the lead singer of The Paradox Twin and has been a musician for as long as he can remember; often playing in the likes of school bands and working hard to get the band’s big break.

The Paradox Twin was formed by Leelan, the band’s guitarist. One day, the pair started jamming and exchanging ideas, which led to the formation of their first band. By 2015, after a few change-arounds, Danny becoming a father and reaching a bit of a personal crossroad, he began to sit down and write the first album for The Paradox Twin… The Importance Of Mr. Bedlam. Once it was finished, he got back in touch with Leelan and said ‘I’ve got this album and I really want to start doing some stuff with it again’.

The band ended up at Outhouse studios in Reading, which is run by John Mitchell, who also co-manages White Star Records, the label that Paradox Twin are signed to. He [John] loved the album and, along with the record label co-owner Chris Hillman, signed the band up for a three album deal.

Speaking of which, their debut album recently turned three. Danny recalls, “It’s crazy! The first year was a whirlwind because we got two award nominations by Prog magazine for best video and single, before the album had even come out! We toured up to the end of 2019, and then 2020 was just a complete write-off; but it’s been good actually. It’s just a shame that COVID happened because I think stuff was starting to happen for us with gigs, but it is what it is.”

Danny continued, “Lockdown did me a bit of a favor in a weird way, because at the beginning of 2020, the plan was to go into the studio – but I hadn’t really finished writing the album. I ended up using the time to finish writing and tweaking it, so I think it’s come out better than it would have done if we’d have forced it when originally planned.”

The album was recorded, but the release was delayed due to Covid unfortunately. The first single from the album is planned to release in the middle of August, with the album itself planned for the beginning of September.

Gigs are being missed by all who love them, and many have turned to the digital realm to fill the void. In fact the band did a live stream of the whole album, The Importance Of Mr Bedlam, from start to finish on their Facebook page.

“I know a lot of people were recording and then editing the videos and putting them out, but we wanted to do it live. It was quite bold to stream live and we had a few teething troubles at the beginning because of the sound, but it turned out alright and did quite well,” Danny adds.

He continues, “With the new tour that we’ve got coming up, one of the shows mentioned the possibility of live streaming it . Mainly for the people that are still going to be quite nervous about going to gig, which I totally understand; but it’s also for people that aren’t in the UK, because obviously we can’t travel abroad at the moment and we have quite a big following in Europe actually. We only did like two shows over there, but it was just madness as people travelled quite a way to come and see us!”

The band is also sharing the headline with Kyros, as they are share the same label. Danny explains: “We were both looking to do some shows and a tour, so it made sense for us to do something together. I know one of their members lives in America, but the majority of them don’t live too far from us. It was a natural fit for us to play together. I don’t think we don’t sound like each other, but we’re the most similar bands style-wise to play together.”

With the Portland Arms in Cambridge being our local date, I asked if he knew the area: “We played there at the end of 2019. Out of the tour that we did, it was one of my favorite venues actually because the sound was really good. I know it sounds a bit weird from the outside, but having good sound on stage when you’re playing is so important, and it makes or breaks it for me really. We had quite a good turnout as well. Cambridge as an area is nice. I hadn’t been there many times before that, but we went for a walk down by the river.”

Next up, I asked what he would say to those who are also missing live music and needing encouragement to get back to live gigs. Danny replied “There’s nothing like live music. Seeing a band live is the cherry on top, isn’t it? You have to go and see the band live, so they can recreate what they’ve done in the studio. I know there are some people that are just itching to get back to watching live music, and there are some people that are but they’re still quite nervous about going.”

In order to try and encourage people to get back into doing those shows, they are hoping to be able to present the album early to those who come to the gigs. It might be that you’ll get a signed copy of it or you’ll get free merchandise, either way there will be an incentive to encourage people to come to the show. “You’ve got to carry on. These poor venues are suffering at the moment and we can’t have that. We need music venues, if we lose music venues that’d be it.” Danny adds.

I had to ask my classic question of if you could collaborate with any artist, who would it be and why? Danny responded: “Ooh, it’s difficult, there are a lot. I mean I’ve made no bones about it and it’s quite obvious in my music and writing, but I’m a big Stephen Wilson fan. He used to be in a band called Porcupine Tree, and he’s now a solo artist. He mainly did rock but now he’s gone into doing more pop, but I was lucky enough to meet him at one of the awards because John Mitchell knows him quite well. He’s been a big idol of mine for many years, so if I could collaborate with somebody, it would definitely be him.”

The Paradox Twin and Kyros are playing at the Portland Arms in Cambridge on Tuesday 31st August, 8pm. For more information or to book visit theportlandarms.co.uk / seetickets.com.