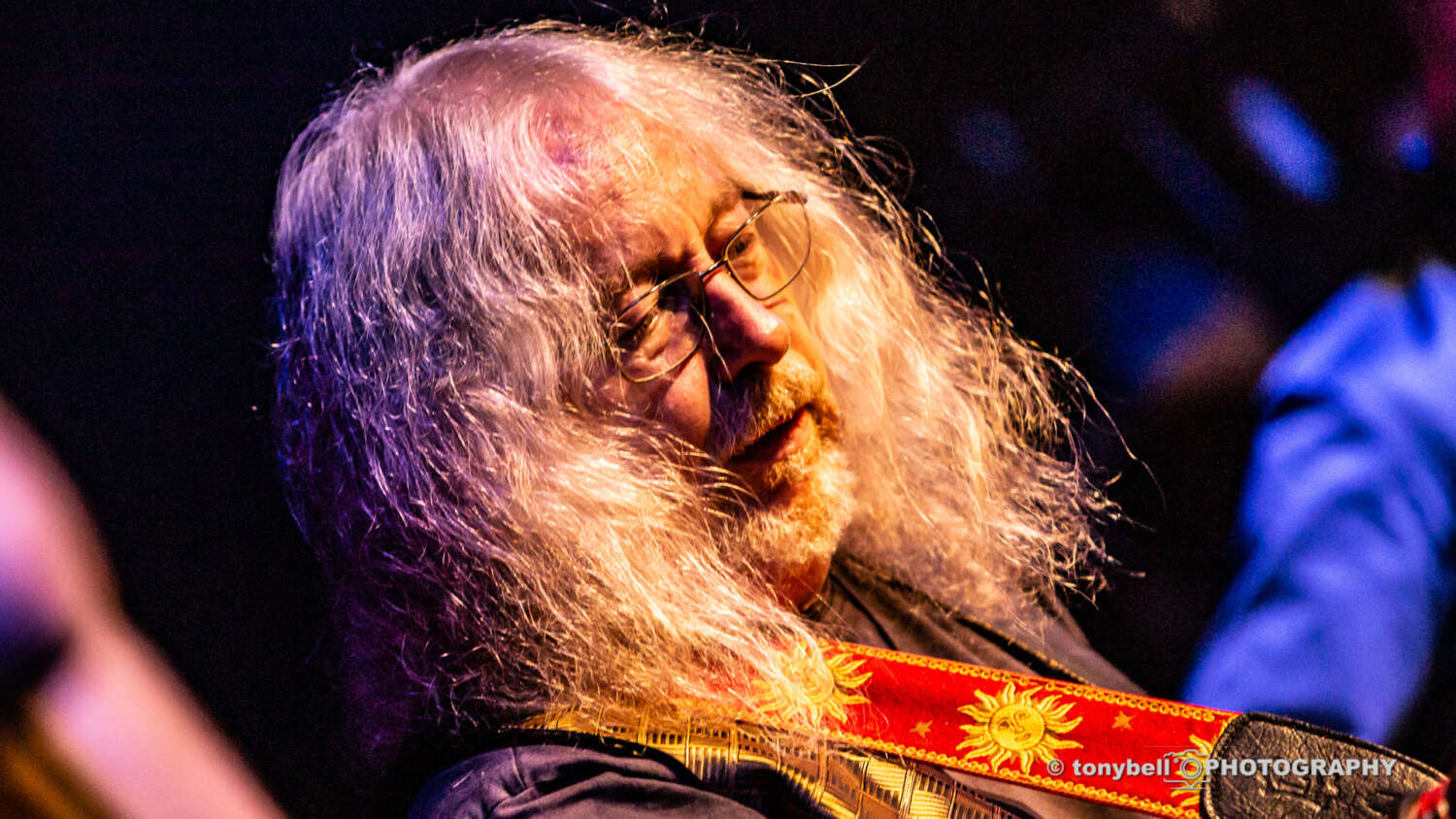 Blues singer and guitarist Dave Thomas was born in Newport, South Wales but now resides in Norfolk. He runs the regular Fine City Blues sessions at The Louis Marchesi pub in Norwich – or at least he used to before the world turned upside down in March of this year.

He played his first gig in more than seven months at The Banham Barrel, It was there that I caught up with this soft spoken, gentle man and discovered an Irish musical connection. But we started in Newport and Dave’s choral beginnings.

TB: How big an influence was the Chapel on your music?

DT: Well, it was bigger than I realized. It was where I sang in the congregation and a little bit more in the choir. As a youngster I was encouraged because somebody thought I had a half decent voice, so it gave me confidence straight away.  Years later, looking back on it now, I’ve worked with over forty black American blues artists and gospel artists. Of course, gospel is a huge influence on the blues they are intermingled really.

My favorite blues players of all tend to come from that church background because of you can just hear the soulfulness and their singing. Otis Spann is my absolute favorite. He was a piano player with Muddy Waters for years. But he was obviously ‘church trained’ in the early days and the blues being Devil’s music, you know, you take your path! But I think that was a huge influence. The other thing I had no inkling of, even when I was younger, but my mother was the youngest of thirteen children with ten brothers whom I later found out formed a male voice choir in the docks in my hometown.

So it was sort of in my blood without me realising it. And then I learned that, although my mother denied being Welsh for start, she’d admit to being ‘a Newportonian darling’, but that was about it. I actually have Irish blood and French blood although I’m Welsh really. So there’s a touch of the Irish, you can tell that with a hair, I guess, and maybe the music.

TB: Your first band, am I right was Skid Row, but that’s not the same Skid Row that Phil Lynott and Gary Moore played in?

DT: No, my band was earlier. I came up with a name much earlier than they did. I would have twelve or thirteen.  Early gigs were in completely insalubrious settings, like the Caribbean Club in the docks, in the basement.  We sort of assumed that all these black folk would like it because it was blues, but they’d never heard it before, ever.  They were all Caribbean and ska was the stuff for them! But they did like it. And they sort of took us under their wing, which was lovely, really,

TB: Not many people can lay claim to the fact that their band was billed with Fleetwood Mac as the support band!

It only happened once, but it did happen.  I joined a band called Blonde on Blonde, they were one of the sort of seminal, what they call now, ‘progressive rock’ bands, but it began its life as the best blues band in my hometown.  Those guys were about six or seven years older than me. And they moved up to London, formed Blonde on Blonde. After the first album with another lead singer, he moved on to pursue a different musical direction, they came back and got me to join them.

I joined them in ’69. it all came to an end in ’72 but it was a hugely poignant time for music in the UK, particularly.   I’ve been on stage sharing a bill on equal terms with Genesis, Wishbone Ash, we supported Deep Purple. It was just one of those magic moments, Blonde on Blonde at the time had a quite a special reputation. They’d done a lot of the major festivals. They did the two Isle of Wight festivals, one with Dylan, one with Hendrix, and Fleetwood Mac, bless them, had just got to that magic, difficult stage before they went to the USA. They’d lost Peter Green and they’d lost Jeremy Spencer, literally. And we shared a gig in Keighley where we topped the bill. But we had another festival to move on to so we that we actually chose to go on before they did, so we could get away and do another festival the same day. It was one of those special things.

TB: Now let’s fast forward from that amazing time in music to today and life in a global pandemic. How have you been coping?

In some ways, it’s been hugely difficult because it was like a tap been turned off at the beginning of lockdown. I organise a regular festival in Norwich called the Fine City Blues Festival under the banner of Fine City Blues, and I’ve been running a regular Blues Club every Thursday night at a pub called the Louis Marchesi, right in the centre of Norwich.  That’s been going for five or six years, and all of that, you know, had to be shelved, to be put on ice. The good thing, however, was that I was already working or having in the can three new albums. And, you know, it’s very easy for me to put these things off, because I’m doing lots of live gigs. But I’ve been actually able to get one of the three albums out which is called One More Mile.

TB: Tell me about the album.

I call it ‘One More Mile’ because it really feels like a lifetime’s journey that I’ve been on. And I’ve been playing music, mainly blues, but rock and folk and some jazz – God helped me! – for well over fifty years now. So the milestone of any album that I get really is quite significant because like most musicians, I had to get a day job.  For twenty five years I’ve worked in advertising, marketing and newspaper businesses and stuff like that.

So I’m back to music full time now. The material on One More Mile comes from three different periods. The first, I started a recording when I was running an agency down in Brighton where we recorded backing tracks for four songs with some great musicians I knew then, including a drummer called Terry Popple, who worked with Van Morrison for quite a period of time, a superb drummer.

In 2002 or maybe 2003 I went over to see some great friends of mine in Ireland, one of whom was the wonderful Canadian songwriter called Tony Henderson. He’d written three songs that he figured that I could sing pretty well. And a great friend of his in Ireland is a guy called Declan Sinnot. Declan is the guitar player with Christy Moore. Christy Moore is bigger than the Pope in Ireland.  I’ve known Declan since the 70s, after he left Horslips he came across to London. Declan and Tony were in a duo called Gandydancer.  Declan is just superbly talented. I saw them at the Halfmoon in Putney when Christy Moore was part of Moving Hearts.

When I was over in Cork in 2000 or whenever it was,  Declan had recorded the three tracks written by Tony. He’d done all the guitar parts they were just ready to go. So I just went into his wonderful home studio by the sea and sang three tracks. Completely different stuff, and I thought that’ll be the core element of my acoustic album when I get round to that.

And then in I think it was 2016, I’d been running the Fine City Blues Club and on a couple of occasions I got stuck for rhythm section.  I called an old friend of mine, Ken Pustelnik, who’s was from the original Groundhogs and bless him, being a real trooper, he jumped into the car in Bristol, come all the way up to Norwich, play a gig and drive back again if necessary, or he stayed with us couple times as well.

So we re-established an old friendship that we’d had when I was in Blonde on Blonde in the late 60s. Ken invited me down to Bristol, where he was putting together his own version of the Groundhogs, getting ready to go all over again, you know, none of us are getting any younger and all that. I wend down and worked out with The Groundhogs.

He sent me the backing tracks that they recorded, and I was able to put the vocals and master it over here in in Norfolk.  We saw each other shortly before the lockdown because he was back on tour with Stray, Stray and Ken Pustelnik’s Groundhogs and I said asked did he mind if I actually did something with those three tracks that we’ve done? And he said, No, it’s all part of the story.

TB: Did you ever consider issuing the three parts as individual EPs?

So one more mile has got all those three bits of music in? And they were expertly mixed and mastered? And amazingly, I mean, I’m saying it myself, but they fit together really well. The common theme is my voice, in different styles, but I’m really pleased with it.

TB: So where can people buy physical copies of the CD apart from the ones that are going to be sold here tonight?

They can buy it from my website, which is DaveThomasBlues.uk  They can buy it as a physical CD or as a download. I’m experimenting with this newfangled technology stuff. So it’s also available through Bandcamp.

Marcus Neal – The Smokehouse: Virtual And Better Than Ever

A Night In With Stephen Fry