Taking to enthusiastic, passionate people about music is one of the significant benefits that comes with working in the live entertainment industry. They don’t come much more enthusiastic than Polly and David who together are False Colours.

The duo began to get noticed performing their own material in 2019, they were getting more gigs, headline slots even, and above all getting paid to perform their own material.  Then along came a global pandemic and it all faded away.

Their first break came at FolkEast:

Polly: “We played FolkEast in 2018, like at 2pm on a Friday on the Soap Box Stage, we were one of the first acts on, then the following year we were on at 10pm on the Saturday, it was so fun.  All the lights in the woodland bit were magical and there were people there singing along to OUR songs!  It was crazy!”

David: “In the week after we were booked to play at FolkEast we booked a day at a recording studio near Clare in Suffolk, we recorded, mixed and mastered the five songs on that EP in one day!  (Here’s Something)”

Ask about the band’s style and you get a very precise, well though out answer:

Polly: “It is happy/sad, rhythmic, jangle indie folk. We are attempting to coin the term ‘jangle folk’

David: … or rather re-coin the term

Polly: Well, we are trying to discover if jangle folk is really a thing!  Jangle pop is a thing, jangle crosses over into other genres like folk rock.

David: A lot of our early inspiration was tradition folk music, but I am a drummer first not a guitarist which is why I play a tenor guitar – with just four strings.  I felt like I had a lot of catching up to do if I wanted to write beautiful folk songs.  Because it is an electric sound, we have always used a lot of reverb and it has been a very clean sound it kind of took us in this direction of jangle which is characterised by clean, undistorted, trebly, arpeggiating droning guitar.

Polly: It’s very frustrating – you sit there on Spotify trying to find someone else who is doing it!  That we can’t sounds like a positive because it means we are totally unique. But in another way, it is difficult because how do people find you if they don’t know what you are?

David: The term jangle comes from Mr Tambourine Man by The Byrds – we are not saying that we are like that, that is not what we sound like, our songs are a much more traditional fit but we are putting that with the jangly sounding guitar. But jangle as a style has crossed genres in the past, with power pop and psychedelia – yes, we have done a lot of research on jangle!

Tony: How comfortable have you been doing virtual gigs?

David: We started doing virtual gigs last year, more like chats with a song here and there.  At the time we struggled with it. So, we stopped doing it.

Polly: It felt like every time we went on, we thought we had everything sorted and it would all be good and then when we watched it back there would be some ridiculous sound issue, like its only coming out of the left headphone, or we sound fifteen miles away.

David: And we missed an audience.  We love audience feedback.

Polly: That interaction you get when you’d spot someone and you’d know that they get it!

David: We love having a laugh, and it is hard to have a laugh if nobody is laughing.

Polly: David has this brilliant self-deprecating style, when he talks in-between songs, he will casually put himself down in the most sarcastic way ever. Quite often I’ll be looking at him and see people going “is he for real”, and then I’ll say yeah, then they giggle, it’s almost like between us we create a triangle with the audience.  They are sometimes unsure and then I convince that that it’s OK to laugh!  That is fun, and you don’t get that online. And when the comments come it is ten minutes after you’ve said what you said and it’s all really unnatural.

With all this talk about music there had been no mention of camper vans, board games or cats!  Through lockdown the pair wanted to connect with people. This they did by creating a Facebook Group called “Folk of the Round Table” based around the things they love – its a mish mash pot of board games, campervans, escapism and maybe cats, folk music and a little bit of history.  Behind them on our Zoom call I could see, neatly stacked against the wall a tower of board games…

Tony: What is your favourite baord game?

David: You see that stack behind us, next to the double bass?  That’s not all of them!

Polly: I really love ‘Pandemic’ and there is a reason for this. Pandemic was the first proper board game that I played.  We first played it the Christmas before the pandemic hit and I remember playing it and thinking ‘this game is so clever‘ but I had this little fear wash over me, imaging a global pandemic, how terrifying would that be and literally three months later a global pandemic hit.  In my mind it connects me back to before the pandemic and reminds me of that amazing Christmas we had where we vowed we were going to see more of friends and have more friends over.

David: My favourite… its difficult.. you can’t beat ‘Ticket to Ride‘, you can’t beat ‘Settlers of Catan‘ but one that I really enjoy at the moment is ‘Colt Express‘ which is essentially a train robbery, a comedic train robbery. You put all of your actions in at once and play it out to see what happens.  And it has a 3D board.

Tony: And the camper van – what model is it?

Polly: It is actually only a year older than me.  It is good that it is still going. But I feel like it is a representation of myself – its still going but its struggling! All of the things inside are perfectly intact, all the cupboard doors still work, all the little latches, everything’s great!

David: Its just not big enough to take a full drum kit, as well as sleep three people.  We wanted to be able to get all the gigging gear in and go to far flung places and stay over.  It is like a puzzle getting everything in, bits constantly need to be moved. And what it has made us realise is that we need a bigger camper van!

Polly: And maybe one that’s more comfortable to drive, there is not even a headrest. And the front seats are so caved in that they are literally like buckets, when you turn it into a bed there is nothing supporting your lower legs.  So we have to take it in turns so we don’t always have a dead leg. 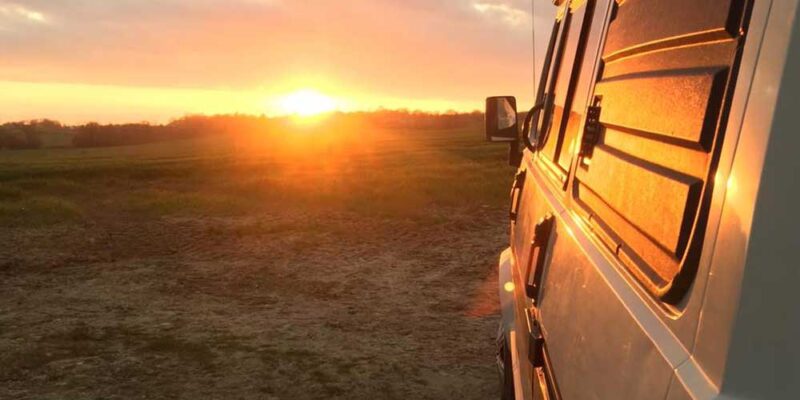 Tony: How many cats do you have?

Polly: Two, they are brothers. I’m not one of these crazy cat ladies who knows their birthdays and stuff… oh, but I do, its 20th June!  NO, I’m not a crazy cat lady.  But these two are like dogs really.

David: They are, they are like proper bruisers, very cuddly, friendly, lovely cats but they are both about 16 lbs.

After that slight diversion I was keen to know how Polly & David go about songwriting.

David: We have a number of methods. I feel our best work comes about when a line pops into my head. I’ll be doing something like the washing up, or out on a walk or having a shower… or any number of mundane things and then a line pops into my head.  Then I have to stop what I’m doing and just sing that line to a voice memo on my phone.  From there we work on it line by line, look at a rhyming dictionary, I find that the best songs that we’ve written are the ones that write themselves, they fold out of the air.

Polly: David is really good at archiving ideas. He’ll come up with a little idea, he won’t even tell me about it and will sit with it on his phone for ages.  Then one day we’ll be writing a song and he’ll say I already have a bit that goes there, this will work really well.  But we do it many different ways.

David: I love song writing so much – there is nothing that makes me feel better than having an idea that becomes a song.  The last year has been so difficult to come up with ideas.

David: We are hoping to release a steady stream of recordings over the next year.

Polly: We have had a lot of setbacks with recording.

David: It is such a difficult process recording, you know what you want, you know the sound you want to get out there. It is so hard to take that finished song and put it onto a recording and be pleased with it.

Polly: Especially when you are one of the most hypercritical people ever!

David: Yes, I am particularly bad, I will really dissect it and rip it to shreds.  But we are very positive, we have worked out our sound, where we are going with it.  We have our process nailed down.

Tony: Thank you both for taking the time to talk to Grapevine Magazine. It has been a genuine pleasure and I look forward to seeing you play live in the not too distant future.

You can find out even more about False Colours by joining their Facebook Group ‘Folk of the Round Table‘ or by visiting their website falsecolours.co.uk where you will find links to their social media pages and mailing list.

Wendy James Comes Hurtling Out of Lockdown with Stunning Video

Magic Bus Make a Great ‘Substitute’ for The Who