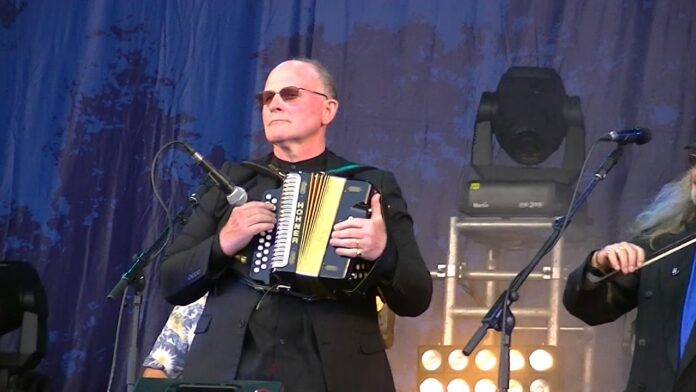 Feast of Fiddles have been redefining folk music, with six albums and an array of sold-out festival appearances under their belt.

Hugh Crabtree, founder and boss of Feast of Fiddles, said: “I was just struck with this mad idea that it might be quite interesting to ask six of the country’s best fiddle players, that I knew of, if they’d be interested in filling a one-off date at a folk club. That is sort of how it started. A daft idea for a one-off gig.”

The band now operates on an annual two week tour, with an occasional festival appearance, and has been doing so for 26 years.

Hugh discussed the secret to the band’s successful lengthy run, stating: “It’s a three-legged stool, it’s the people, the music and the money, all in that order. You have to get all of them right. It’s completely transparent.

“There aren’t any managers, agents or professional businesses. There are no egos, no divas, it’s just really top-class musicians joining together to provide music entertainment. And, of course, the tour doesn’t last long enough for us all to fall out.”

Though, as the band’s 25th anniversary approached, they decided to look back on the original set lists.

Hugh said: “There was an emerging feeling that maybe we didn’t want to entirely lose sight of where we had started and where it all came from. It isn’t that we dropped doing all of the stuff which is popular with the audience, it’s just we’ve gone back to our roots.

“It’s been quite good fun to do, to pull it all back out and freshen up the arrangement. We’ll be doing some more of that this year.”

Feast of Fiddles are in the middle of their Spring Tour, which travels all across the country, stopping off in a few familiar destinations, like Bury St. Edmunds.

Hugh told us how grateful he is for the Feast of Fiddles growing fanbase, explaining : “It’s brilliant. It staggers me how we get people turning up after a show and saying, ‘Oh, we’ve never missed one of these, you know. We have to come for our annual dose of ‘Feast of Fiddles’.

“We did our first gig at The Apex in Bury St. Edmunds a handful of years ago, absolutely loved the venue. They, quite reasonably, have a non-annual repeat booking policy. Last year, I announced to the audience that having done two years on the trot, we probably wouldn’t see them again until 2021, and there was great moaning and groaning from the full house.

“I cheekily announced: ‘If you’re really interested then drop a line to the theatre and we’ll see what happens’. And what happened was, when I approached the programmers in the middle of last year, they said: ‘we’ve had a couple of letters so we’re going to have to book you again!’”.

When discussing the band’s future, Hugh says: “As long as we continue to enjoy doing it and continue to want to do it, we will do it. Wise members of the band would say, as long as Hugh continues to organise it, we’ll keep doing it.”

For more information or to book visit feastoffiddles.co.uk.