First Time Back Out on Tour 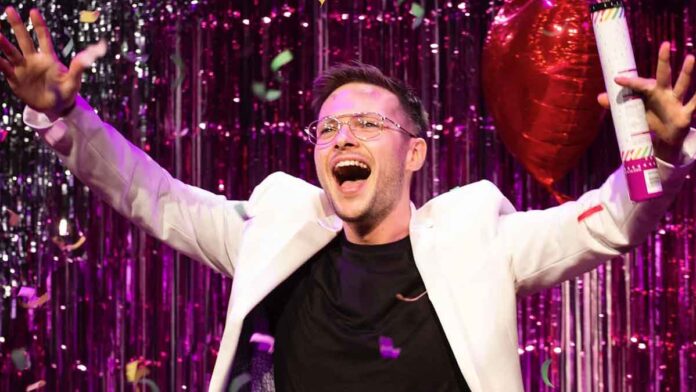 Can you remember your first time? Nathaniel most certainly does… and he can’t seem to forget it. To be fair, he has had it playing on repeat for 15 years. But now the party is over, the balloons have all burst and he’s left living his best queer life: brunching on pills, watching daytime TV, and procrastinating on Google…

Exploring the ups and downs of living with HIV since age 16, First Time is the ‘hilarious and heartbreaking’ autobiographical solo show of acclaimed actor, writer and HIV activist Nathaniel Hall’s personal experiences of growing up gay and HIV+ in a straight and HIV- world.

Diagnosed as HIV+ two weeks before his 17th birthday and after his first ever sexual experience, Nathaniel kept this a secret from his family for nearly 15 years. In 2017 aged 31, he had a breakdown, came out to his family as HIV+, and created this gut wrenchingly honest and equally hilarious play with the award-winning Dibby Theatre to mark the 30th World AIDS Day in their hometown of Manchester.

In the three years since its World Premiere, First Time has toured across the UK and has been seen by over 3.3k people, including runs at the 2019 Edinburgh Festival Fringe and the 2020 VAULT Festival in London, winning multiple awards and receiving audience and critical acclaim in equal measure. Nathaniel’s activism in HIV continues long after the curtain comes down through his community-led creative outreach project In Equal Parts which has engaged over 60k people. His story has been seen by millions in broadcast media and print.

Nathaniel was also one of the undoubted breakout stars of Russell T Davies’ recent Channel 4 and HBO hit series about HIV It’s A Sin which has enjoyed global success. Playing Donald Basset, Nathaniel is notable as the only openly HIV+ member of the show’s cast.

Nathaniel is now delighted to be back on the road taking First Time to new audiences across the UK kicking off on October 7th at the Yvonne Arnaud Theatre in Guilford. The show will continue to the Isle of Wight, Norwich, Oxford, Liverpool, Luton, Bath, Sheffield and Doncaster to name but a few venues before concluding the first leg of its new tour back in Manchester’s newly refurbished Contact Theatre where Nathaniel’s 7-performance run from November 30th will mark World AIDS Day 2021 on December 1st with a special gala performance.

Described as a ‘rollercoaster of emotions’, First Time is a funny and fearless celebration of life and humanity that smashes through the stigma and shame of HIV. Nathaniel and Dibby Theatre are immensely proud of the show and its associated creative outreach projects that continue to educate, destigmatise and empower people to live boldly and with pride.

“I lived in secrecy for nearly 15 years but denying my HIV status publicly only helped to feed the narrative that HIV is something to be ashamed of. First Time marked a very public coming out as HIV+ and the show has taken me on a journey to places I never expected. I have been blown away by the public reaction to my story and feel humbled and honoured to be inspiring others to smash through the stigma of HIV.

“HIV has changed, but public knowledge lags far behind. Working alongside our charity partners, myself and the Dibby team are determined to end HIV stigma and shame for good, as well as contribute to the goal of ending all new transmissions of the virus by 2030. We’re thrilled to be back on the road once more using storytelling and creativity to advocate for better representations of HIV in popular culture.”

First Time is directed by Chris Hoyle and designed by Irene Jade.

First Time is supported by Arts Council England and was originally commissioned by Waterside Arts.

First Time is published by Nick Hern Books and is available in paperback: www.nathanieljhall.co.uk/shop

Clare Teal and Her Sextet in Cambridge

Clare Teal and Her Sextet in Cambridge