Giovanni Pernice: This Is Me

There was a packed house and a big buzz of anticipation at The Spa Pavilion Theatre in Felixstowe, as we took our seats to watch ‘This is Me’ – the new UK dance show and tour starring Strictly Come Dancing’s current champion, Giovanni Pernice – alongside his super talented troupe of singers and dancers.

Never one to hide his light under a bushel, Giovanni’s cracker of a show opened with a single spotlight on the coveted Strictly glitter ball trophy – the light then snapped off into complete darkness.

When the spotlight returned, the glitter ball was gone and in its place stood the star of the show, beaming from ear to ear and he lapped up the rapturous cheers and applause from the audience! This was to then set the tone for an hour and a half of sheer joy, subliminal dancing and incredible singing – the latter courtesy of Whitney Martins & Tobias Turley – plus of course, lots of chat, jokes, and banter from Giovanni himself.

Our first number was the 1930’s Irving Berlin classic, ‘Puttin’ on the Ritz’ with the entire cast delivering a slick and stylish routine that included some superb tap dancing and great dexterity with both top hats and canes.

The energy then shifted from a jazz classic to a Charleston which was sharp, fast and very animated before slowing things right down and Giovanni danced beautifully with his four female dancers – Lauren Oakley being his ‘leading lady’ throughout the evening – and she and Giovanni then delivered a quickstep that really showcased both their talents.

Giovanni stopped several times throughout the show to chat and joke with the audience, making frequent references to Felixstowe being his ‘home town’ (which the crowd loved!) and also letting his secret out that he is a huge admirer of the late, great Freddie Mercury, and the band Queen.

This ‘Queen’ section of the show was an absolute delight – both Whitney and Tobias did the late superstar complete justice in singing an outstanding duet of ‘The Show Must Go On’.
At this point there were no dancers on the stage and so we were completely enthralled by the power of their voices – and then, the whole cast took to the stage in a breath-taking, modern, and contemporary version of ‘Bohemian Rhapsody’ with glimpses of the rumba, and some beautifully executed slow samba rolls.

Whitney then sang ‘Another One Bites the Dust’ while Giovanni and Lauren executed a magnificent tango with sharp staccato moves and plenty of passion.

In previous years, Giovanni has invited a lady on stage with him – usually to be wooed and flirted with, and always in a gentle and humorous manner. This has always been a fun element of what Giovanni does, and just goes to show that he’s never been afraid to see the funny side of things and play the jester from time to time.

Last night however, it was a male audience member that got his chance in the spotlight – and was quite possibly the funniest thing I’ve seen this year. Once ‘Lloyd’ was settled on the stage sofa, newspaper in hand – ‘I Want to Break Free’ struck up, and three male dancers dressed in 1950’s style housewife’s attire (complete with vacuum cleaners, hair curlers and slippers) proceeded to dance and clean around our ‘victim’, even removing his hat to dust his head at one point!

As if this wasn’t funny enough, Giovanni then appeared in the iconic Freddie Mercury costume of pink tank top, leather mini skirt, long black wig and lace stockings – and wobbled around on his heels, snagging up his stockings and finally smothered Lloyd onstage to the rapturous laughter and applause of the audience.

Having seen Giovanni’s truly humorous side in the first half, the second half opened on a very opposite note, with Giovanni and two other male dancers delivering a powerful and stylish paso doblé – with lots of flamenco moves and strong lines from all three of them.

Another highlight of the show was a mixture of rumba, Viennese waltz and even Argentine tango to the Michael Jackson song, ‘Man in the Mirror’, in which Giovanni took the stage solo in front of two full length mirrors and demonstrated his passion for both dance and life, this was a truly reflective moment (no pun intended!) which was further enhanced when Lauren joined him onstage and they moved together in complete harmony.

Just when we thought we’d seen all of Giovanni’s talents – he took it one step further and stunned the audience by joining Whitney and Tobias centre stage to sing the utterly beautiful song ‘The Prayer’ by Mark Masri. For those that have never heard the song, it’s extremely emotional and moving with parts sung in Italian – and was the perfect opportunity for Giovanni to add another tick to his list of artistry.

Throughout the show, Giovanni spoke very fondly of Rose Ayling-Ellis, the Eastenders actress who was his celebrity dance partner on Strictly Come Dancing last winter and who undeniably deserved to lift the coveted glitter ball alongside Giovanni.

Rose is profoundly deaf and so it was even more of an accolade for she and Giovanni to win the show, and so it was hugely fitting – and extremely emotional – when the cast closed the show with Keala Settle’s empowering smash hit ‘This is Me’ from the film ‘The Greatest Showman’.

While his amazing supporting cast danced behind him, Giovanni took front stage alongside Whitney and Tobias. As they sang, Giovanni signed the words for us (for those that watched Strictly, you’ll know that he made it part of his training with Rose to learn sign language) and it’s truly one of the most moving and emotional moments I’ve been privileged to encounter live on stage.

‘This is Me’ – Giovanni warned us at the start of the show that ‘the clue is in the name!’
But all joking aside, this man is actually a truly humble and very beautiful soul, who clearly loves what he does, adores his supporting cast, and will always be welcome back in his ‘home town’ of Felixstowe! 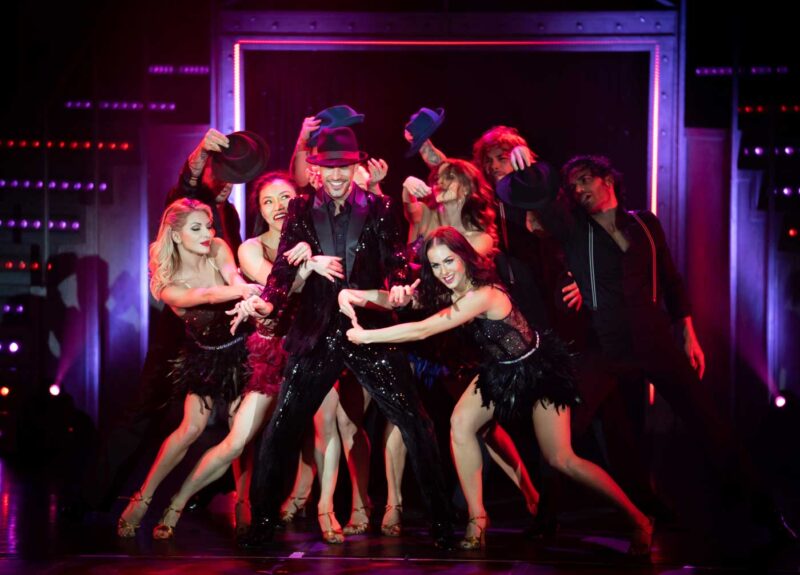