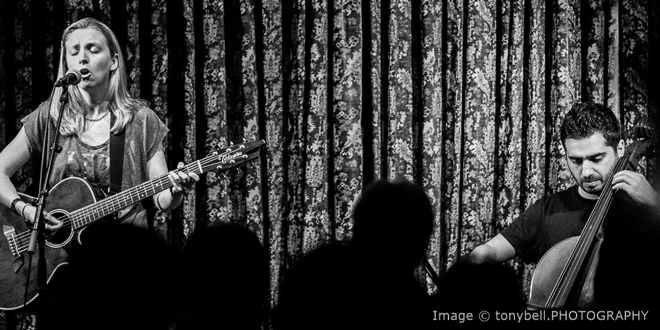 Hannah Scott at The Froize

Songs for her sisters, songs for her Mum, songs for her Dad.  Hannah Scott had us hanging on every word as she captivated the audience at Folk at the Froize last night.   There is a depth to Hannah’s lyrics underlined, as if such were necessary, by Stefano Della Casa’s deep, warm cello.

By way of introduction to “The Hottest Flames Burn Blue” Hannah explained that the song could describe how depressives make the best creative types – “Your darkest days are cruel, your darkest days are fuel” will resonate with a lot of artists we know.

Her song for her Dad, written about the five year old Hannah spending time with a man, who like Dads the world over, do what they can to hold their families together. Something children don’t understand nor should they have to, for they will grow up soon enough.

This shy young woman from Suffolk, who admits to having a love affair with Italy, sings her intensely personal songs that draw you in gently.  She joked about her “miserable songs”, yes there is a melancholy to them, but that is not to say they are not beautiful – certainly they are far removed from “miserable”.

Opening the evening was James Morgan who plays at a different pace to Hannah.  Yet his songs are just as personal. East Anglian Skies struck a chord with us, mere interlopers in the region, blowins from a foreign land.  Yet like James, it is under the enormous skies of East Anglia that we want to lie when our time comes.

There were light songs too, “Pirates ‘cause we Arrr” is on the surface a comical song with a chorus best sung after a few pints.  But do not dismiss the meaning in this man’s lyrics, listen closely… “This black flag does not match our songs…”

Folk at the Froize brings you some of the best musical talent that there is.  We have lost count of the number of BBC2 Folk Award winners that have played or are about to play in Chillesford.  Squeezed into a small auditorium which doubles as a restaurant, it is that concentration, that intimacy that makes these events so special.  Amazing what a little vision, a bit of determination and some basic planning can achieve!