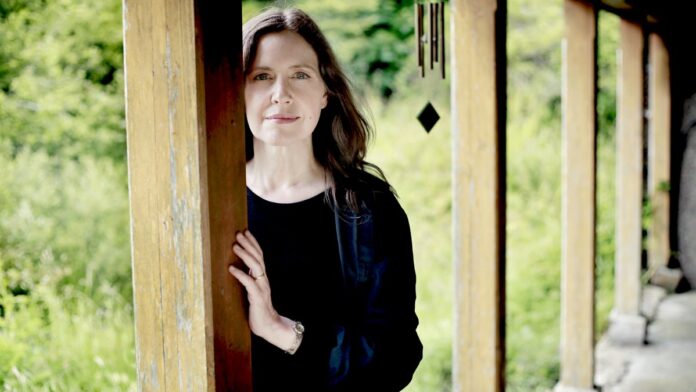 Born out of the pandemic and due for release on October 15, The St Buryan Sessions will be the sixth solo album by award-winning multi-instrumentalist and singer/songwriter Sarah McQuaid, and is her most powerful and emotive offering yet.

“I can’t wait to get back out on the road again,” Sarah enthuses. “Obviously I’m nervous about COVID, but I desperately miss performing to live audiences. The few gigs that I’ve managed to do this summer have been so, so lovely – every time I do a gig, it just brings home how much I’ve missed it.”

The St Buryan Sessions had its genesis in the spring of 2020, when Sarah’s gigs and tours were cancelled due to COVID-19. Thanks to a successful crowdfunding campaign, she was able to finance a live solo recording (sans audience) in the lovely medieval church of St Buryan, not far from her home in rural West Cornwall.

Conceived as a concert set and including such fan favourites as “In Derby Cathedral”, “The Sun Goes On Rising” and “Yellowstone”, the album is a journey not only through a wide range of instrumentation and styles, but also through the spectrum of emotions that Sarah evokes in her performance and invokes in the listener.

Sensitively captured by her longtime sound engineer and manager, Martin Stansbury, with the aid of ambient microphones placed throughout the church, the sound of Sarah’s voice and music soars through the stunning acoustic space as she moves between acoustic guitar, piano, electric guitar and floor tom drum, performing songs that span her 24-year career – from “Charlie’s Gone Home”, originally recorded on her 1997 debut album When Two Lovers Meet, to electric guitar based pieces from her most recent studio album If We Dig Any Deeper It Could Get Dangerous.

Two previously unrecorded covers feature on the album: the classic jazz standard “Autumn Leaves”, on which she demonstrates the full dynamic range of her lush, distinctive voice, and a cover of “Rabbit Hills”, written by her dear friend (and past producer), the late Michael Chapman.

This second piece was commissioned by Michael’s wife Andru as a gift for his 80th birthday and sees Sarah at the beautiful grand piano that resides in the church, her compelling, heartfelt delivery revealing the depth of her immersion in the rich imagery of Chapman’s evocative lyrics.

“I was absolutely devastated by the news that Michael has left this world,” says Sarah. “He was a real musical mentor to me. I wouldn’t have ever started playing electric guitar if he hadn’t handed me his Ibanez Artist and said ‘Play this.’ My heart goes out to Andru – she and Michael have both been such good friends to me. I can’t express how sad it makes me to know that I won’t see him again.”

The recording was filmed by Cornish filmmaker and director Mawgan Lewis of Purple Knif with the aid of Eden Sessions veteran camera operator John Crooks. The fruits of their work can be seen here:

See sarahmcquaid.com/tour for details of all shows.