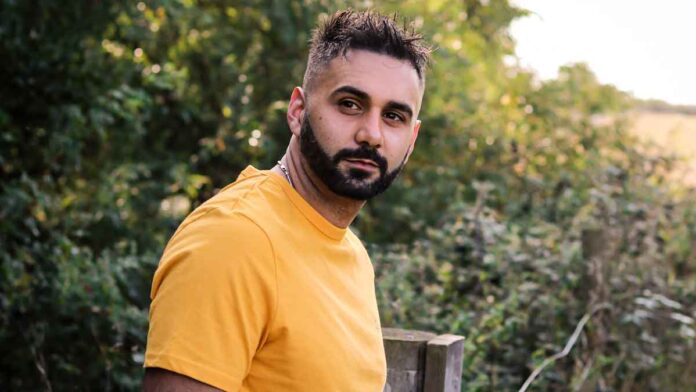 HC: Let’s begin with you telling us how it all started for you?

JA: When I was 17, I started writing my thoughts, about day to day life, down on paper. I feel like I was in that transitional period of going from a boy to a man. My Father had passed away many years earlier and I found writing was cathartic for me. It wasn’t long before I turned the words I was writing into poems and later – into songs.

HC: How would you describe the evolution of your sound & do you feel happy/settled where it is right now?

JA: I guess the evolution of my sound has always been determined by what Is inspiring me. When I first started making music, I was young, I was angry & frustrated. I was heavily into Rap music at that time, so I guess Hip-Hop was destined to be the route I was going to take. However, I was always a sucker for R&B and enjoyed writing chorus’s and incorporating singers into my songs. I guess now I feel like I’ve grown out of Hip-Hop perhaps. What I am doing now is challenging, it’s exciting and I am truly inspired by Pop-Country music. I love the instrumentation and the style of the songs.

HC: What have you been doing to entertain yourself while on lockdown?

JA: I’ve been working on new music and promoting current releases online & I had a new website built.

HC: Who are have been your musical & non-musical influences?

JA: Tupac Shakur was always my biggest musical influence. I loved his lyrics, his work ethic and his complex character. It’s nuts how people still listen to his music today and still consider him the greatest Rapper/lyricist of all time. Non-musically, it will always be my Dad. He was a truly special person. It sounds silly, but my relationship with him was something like that of Simba’s and Mufasa’s, from the Lion King. To me, he was just like that. A King.

JA: It would have to be a song called ‘Just Believe’ which was a Rap song that I wrote during a particularly difficult point in my life. The song has so much fire to it and when I perform it, I can’t help but bring that energy. When I listen to the song, it takes me back to where I was at during that point in my life. It reminds me of how far I’ve come. Not only in music, but as a person as well.

HC: What types of music do you enjoy listening to when you are relaxing?

JA: I love Pop-Country music more than anything else right now. I actually have two Spotify playlists that I curate. One is called ‘Country Cashews’ which is made up of upbeat Pop-Country songs, the kind you would listen to whilst getting ready for a night out. The other playlist I curate is called ‘Cupid Country’, which is one for those nights in, curled up your loved one.

JA: I write the song to a scratch track (a basic guitar track). I then record my vocals and send the whole thing to the producer as a demo, for him to then build the full production around.

HC: When did you last remember a dream?

JA: I was recently waiting to get my next single back from the Producer, I was so anxious to hear what he would come up with that I remember dreaming about all of these weird versions of my song, which I totally hated! That was more of a nightmare actually!

JA: I really love tracks by Dan + Shay. They are a Pop-Country duo who write the catchiest songs. It would be great to support them!

HC: What do you consider your greatest achievement so far?

JA: In 2017 I won the Audience Choice award at the NMG Awards, which took place at the Cambridge Corn Exchanged. I received more votes than over 100 other artists. That really felt like a big deal for me.

HC: What’s different in the music industry today compared to when you first started?

JA: Lots! When I first started, I think it was quite feasible to send off a demo CD In the post and have it picked up by a label. If they heard potential, they could have signed you and nurtured you into potentially becoming a successful artist. These days however, it all feels a bit like a popularity contest with artists having very little longevity. A lot of artists are making more money independently these days.

HC: What’s the biggest problem you’ve had to overcome so far?

JA: Trying to find some rhythm! As I said, nothing about music came naturally to me. A friend of mine, who was helping me make songs back then, got hold of an instrumental for my favourite rap track at the time. He asked me to perform the lyrics, which I knew off by heart, in time with the instrumental. Despite knowing every word, I was absolutely all over the place. It took a very long time for me to get with it.

JA: My favourite part has always been hearing that new song – the next song – and being truly happy with it. I love holding on to it, before any one has heard it. When it’s still super fresh and I perhaps play it to close friends and family only. I’ve always loved that part. I guess what I hate the most is seeing people get hated on for trying to be different with their music.

HC: Name your favourite uplifting songs that always cheers you up

JA: I would have to go for ‘Brantley Gilbert, The One’s That Like Me’. That’s a real anthem for me. I also like hearing ‘M People – Search For The Hero’. it was a favourite of my Dad’s, who I think In fact fancied the singer more so than he enjoyed their songs!

HC: Current future projects: When is your next gig/release? What can we promote/highlight

JA: I have just finished a new single which is titled ‘Down’. It’s a song showcasing my love and support for the underdogs. I always felt like I was one of them. The song was produced by Simon Reid, and I am working on the music video at the moment. I do not have a set release date in mind just yet, but it is certainly coming soon and I am super excited about it! Despite the bad dreams I mentioned earlier, Simon actually did the most amazing job with it and I was really blown away when I first heard it.

HC: What are your social media links? Where can we find your music?

JA: I always say the best place to find me is via my website, which is jakealdridge.com. Fans can also find links to my social media pages there and can even enter a draw to win some free merchandise every single month.