Today sees the release of ‘Vapour Trails’ by Kelly Bayfield.  It is the first single to be released from her much-anticipated debut album.

Many in our region will know Kelly – either singing jazz with Chasing Storms, providing harmonies with Steamboat Union, attempting to keep her former musical partner, Kev Walford under control or more recently, as the producer of Honey & The Bear’s epic Sunday night lockdown livestreams.  She also shared the stage with her late husband, Mat from time to time.

Kelly is far too young to remember the progressive folk rock bands of the 1970’s but I do. ‘Vapour Trails’ brings back memories of those soft ethereal songs with deep meaningful lyrics.  Kelly’s song explores our seemingly insatiable hunger to dominate the planet regardless of cost.

Forget American, folk, jazz and blues. This is the sound of Kelly Bayfield. With ‘Vapour Trails’ she has emerged less from the shadows and more from a chrysalis about to unfold her, not inconsiderable, talent on the world.  But don’t take my word for it, just look at the people making guest appearances with Kelly: Paul Sartin, formally of Bellowhead and Beth Porter who’s cello playing features on albums by the likes of Eliza Carthy. These are but two of the musicians she has been collaborating with, there will be even more well known names making guest appearances alongside Kelly. 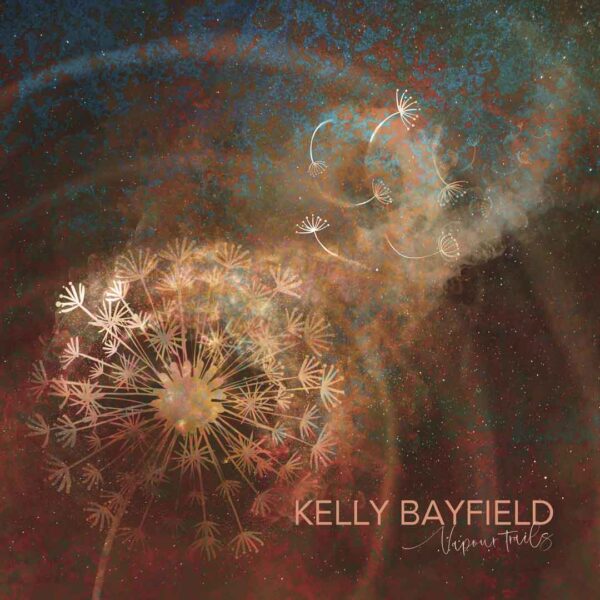 The single, and indeed the album, was recorded and produced by David Edward Booth during lockdown at his studio near Framlingham in Suffolk. David, an established singer-songwriter and multi-instrumentalist in his own right, also co-wrote the songs.

You will have to wait until November to hear the album but for now, treat yourself to this gorgeous single.  It is but a taste of what is to come – you can find ‘Vapour Trains’ here: https://distrokid.com/hyperfollow/kellybayfield/vapour-trails