The New Wolsey Theatre Ipswich and Queen’s Theatre Hornchurch recently announced that they will be co-producing the first UK revival and regional premiere of the Tony and Olivier Award-winning musical Kinky Boots. The production will also mark ten years since the musical’s debut at Chicago’s Bank of America Theatre in 2012.

The new production, which will be directed by Tim Jackson, will run at New Wolsey Theatre, Ipswich from 1 – 24 September and Queen’s Theatre Hornchurch from 28 September – 22 October.

Based on the Miramax motion picture, the musical adaptation features a Tony-Award nominated book by Harvey Fierstein and Tony and Grammy award-winning music and lyrics by Cyndi Lauper.

Charlie Price has reluctantly inherited a struggling shoe business from his ‎dad, which he’s desperate to save. He unexpectedly bumps into a larger than life drag queen Lola, who’s looking for some sturdy stilettos. They think they’ve nothing in common, but as the unlikely pair ruffle a few feathers, designing some fabulous footwear for the factory floor, perhaps they do…

The new production sees Tim Jackson reunite with the two theatres, having previously choregraphed their celebrated revival of Made in Dagenham. Tim Jackson has also previously worked with the New Wolsey Theatre as director and dramaturg of The Stage Debut Award-winning co-production of The Season (Royal and Derngate, New Wolsey). 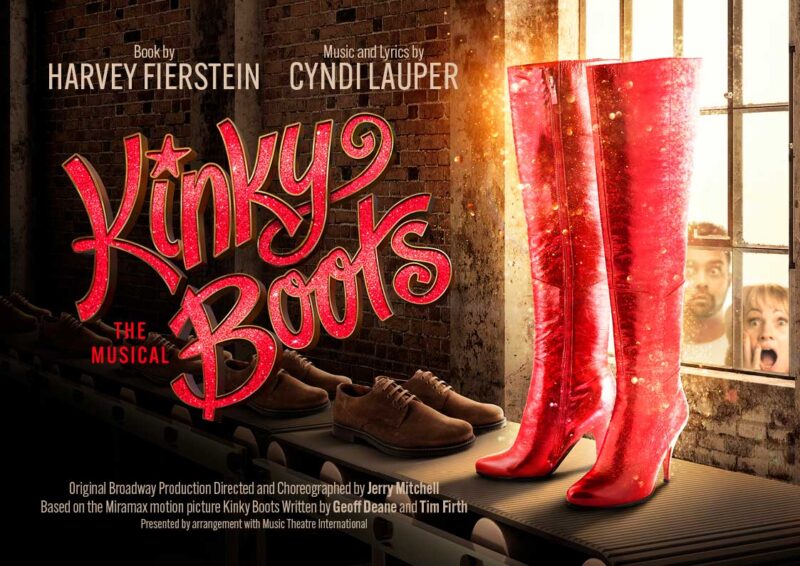 Tim Jackson is staging the upcoming 2022 Olivier Awards Ceremony at the Royal Albert Hall and will choreograph Merrily We Roll Along, directed by Maria Friedman and starring Daniel Radcliffe, at New York Theater Workshop later this year.

Tim Jackson said of the new production, “I’m thrilled to be directing the first UK revival of this fabulous musical. It’s a show that’s got it all: big laughs, a banging pop score and an uplifting story about community, identity and embracing ourselves and each other. Ten years since it took the world by storm, I’m relishing the opportunity to re-explore Kinky Boots in a brand-new production for a new generation. The piece remains as potent as ever, and I cannot wait to join audiences in celebrating our beautiful kaleidoscope of a world.”

Mathew Russell, Executive Director of Queen’s Theatre Hornchurch said, “We’re thrilled to be working with the New Wolsey Theatre again, after a string of brilliant co-productions, including our acclaimed actor musician versions of Made in Dagenham and Once, which we were able to tour together too. We’re equally excited that QTH’s new Creative Associate, Tim Jackson, will be directing, and know that he and the team will do a great job of making a fresh, warm hearted, sassy and gloriously working class take on this hit show, which we’re sure audiences are going to adore”

Douglas Rintoul, Incoming Chief Executive of New Wolsey Theatre, Ipswich said “I can’t think of a better way to mark the start of my new role at the New Wolsey Theatre than with this very special regional premiere. Made by my favourite theatres, and directed by a supremely talented director, Kinky Boots is going to be a smart and gloriously uplifting night out.”

Facebook
Twitter
Pinterest
WhatsApp
Linkedin
Email
News Deskhttp://www.grapevinelive.co.uk
Grapevine Magazine's small team of editors, reporters and reviewers are constantly on the lookout for live entertainment news from Cambridgeshire, Essex, Norfolk and Suffolk. If you have a story you'd like to share with them just click on the link below to email your press release to the team.