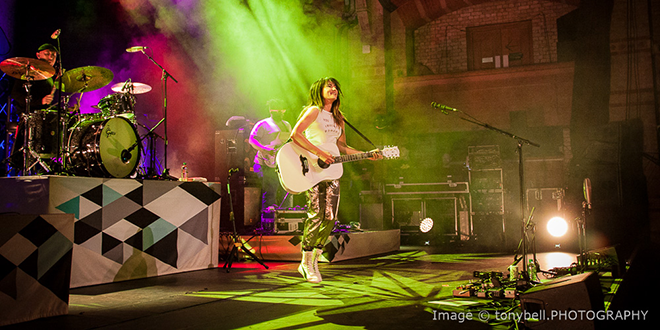 It has been over eight years since I last saw KT Tunstall live.  Back then, a miserable day weather-wise, lightened up in the evening so that Thetford Forest, though damp, was bearable.   No such luck with the weather last night, the lofty interior of Cambridge’s Corn Exchange was a welcome relief.  As she thanked everyone for coming out in such bad weather, KT said “We have a word for this type of weather in Scotland, we call it ‘shite’!”

If you have never seen her live, treat yourself, she is funny, honest and down to earth – and that is before she starts singing!  Who knew she had a skiing stunt double with a big ar…. eh, bottom?

Appropriately she opened with that 2008 song, ‘If Only’, the video for which involves some competitive skiing!   Mixing old favourites with new tracks from the latest album ‘KIN’, which was released in September, Tunstall delighted the fans as she bounced around the stage, giving her all as we have come to expect.  Her move to Los Angles seems to have done her the world of good and it shows in her new material.

In an era of manufactured, competition winning, one-day-wonder, pop stars, KT Tunstall is a breath of fresh air who knows what it means to entertain.

Opening the evening were Calgary based BRAIDS who re-acquainted me with ‘art rock’, a genre of music which was an interesting contrast to Ms. Tunstall’s brand of out and out rock.  Indeed, there were hints therein of experimental jazz, if you arrived late you missed a treat.

A Live Stream with Brit Bennett