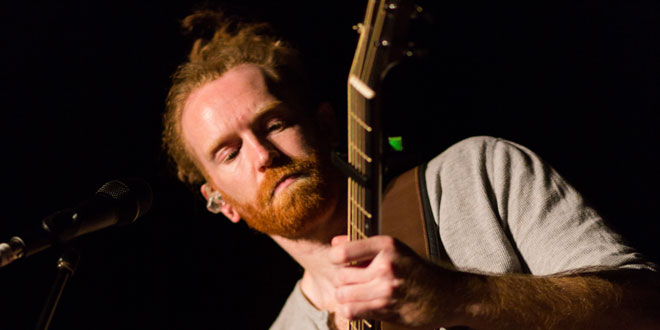 Newton Faulkner’s fifth album, Human Love, was released last November and generally can be described as a little bit different.  But where is the surprise in that? Newton is an innovative type of person – definitely not built by robots!

The current tour opened in Norwich last year and finishes this Saturday in Bexhill on Sea, if you are quick you might be able to catch him at Cambridge Corn Exchange on Friday.

Opening the show with two solo number Newton then introduced us to what he described as unusual for him, having friends on stage with him.  His brother Toby playing a variety of instruments and yet another Toby on percussion.

And percussion plays a big part in “Human Love” – when we spoke last he said: “We’ve done no drums, let’s go crazy on drums!” and so there is a thumping tribal beat to this show and a magic guitar.  Well, Newton calls it a magic guitar, it makes all sorts of sounds, and I daresay that guitar purists might have something to say, but I would argue that it was not a magic guitar but an instrument in the hands of a magician, Faulkner’s finger style and percussive playing mesmerising when you look – let alone listen.

His professionalism and stagecraft too were in evidence as halfway through “Brick by Brick” he stopped on beat, retuned his guitar and restarted the chorus.  He then proceeded to have a fit of the giggles as he started the next number.

There was jumping and there was “danzing” for dancing sounds wrong when Newton says it, and a lot of birthday songs.  There was also a very genuine thank you from Newton to his fans: “I’m not exactly a new artist, the first album is almost ten years old now, so thank you for sticking around.”

At this show he was supported by Ben Roberts whose set, he admitted, had a weather theme!  If you saw him last night and liked his music give him a like on Facebook here: https://www.facebook.com/benrobertsofficial/

Also on the bill were the Liverpool based, Norwegian trio “I See Rivers”.  Eline, Goril and Lill producing a very unique sound and obviously having fun – especially as it was Eline birthday.  Nice to see the Ipswich crowd spontaneously burst into a Suffolk rendition of Happy Birthday!  You can find I See Rivers here: https://www.facebook.com/iseerivers/

If you haven’t already got a copy, “Human Love” is available to buy here:  https://www.amazon.co.uk/Human-Love-Newton-Faulkner/dp/B0157MA8IY?ie=UTF8&*Version*=1&*entries*=0

Lazy Sunday Jazz on the Lawn

Pizza, Live Music and a Pint