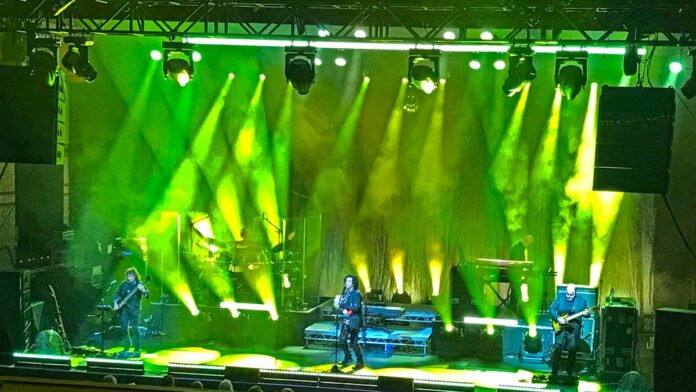 The audience stood, cheered loudly and clapped as the band walked on stage – it was like a huge sigh of relief as the wait was finally over. We get to see Marillion!

You could tell the wait was finally over for them too, they were very happy to be there. Halfway through the ‘The Light at the End of the Tunnel Tour’ the guys looked liked they were thoroughly enjoying themselves.

Kicking off with ‘Sounds That Can’t Be Made’, ‘King’ and ‘Beautiful’ it set the scene for the night ahead. Steve Hogarth was singing his heart away, swapping from guitar and keyboards adding to the dramatics by holding his guitar up high in the spotlights. At one point Steve said he wasn’t feeling that talkative, however he then continued to chat away and engage the crowd with a few stories. You could tell he was loving the performance as he was running about the stage and being in character.

A special night for Mark Kelly, as it’s nearly forty years to the day when his debut gig with Marillion was at Cambridge Corn Exchange. His keyboards sounds were epic.

The sound was spot on and we could hear Pete Trewavas on the bass, the big drum kit played by Ian Mosley was behind a screen to dampen it, however it was still loud as you wanted it to be.

Steve Rothery was swapping out lots of guitars for each track and the sweet sounds coming from his corner of the stage was wonderful. There were spine-chilling moments.

Marillion played their new song ‘Be Hard on Yourself’ from the new album ‘An Hour Before Dark’ due to be released in early 2022. For the fans this was a treat as it was the first time they were hearing it. It’s a hard-hitting track of the time track taking about how we do actually need to be self-aware and hard on ourselves, stop taking things for granted and live a simpler, harder life. A great new song to be released from them and upbeat to enjoy on the radio.

Steve took a moment to really thank the ‘LightSavers’ – these are the fans who have financially contributed to underwrite the insurance of the tour. If the tour is cancelled due to COVID, Marillion will lose out as the insurance will not cover it. Therefore they have asked the fans to raise the money, which they will get back once the tour is successfully over. The band are taking precautions too, by staying in strict bubbles until they reach the end.

With so many albums to choose from, it’s difficult choice for what songs to play. They also played ‘Bridge’, ‘Living With The Big Lie’, ‘Berlin’ and a couple of encores included ‘The Leavers’ and ‘Garden Party’

The whole set was fantastic and the audience were singing to their favourites, you could see the emotion in their eyes as they were enthralled by the evening. The music was superb and it was set against fabulous lighting and lightshow which enhanced the whole wonderful evening.

Marillion are on tour until 27th November where they will be playing Hammersmith Apollo and the gig will be livestreaming across the world!