Mercury Theatre, led by Executive Director, Steve Mannix and Executive Producer, Tracey Childs, last Thursday announced its opening season in the company’s extensively refurbished venue, which will reopen next month after two years of closure following the Mercury Rising transformation, a three-year campaign which raised over £11.3 million to reimagine the theatre and improve accessibility throughout.

We were at the theatre when, alongside Creative Director, Ryan McBryde the three were barely able to contain themselves, like excited children who had overdosed on Sunny Delight before their friends arrived for the party!

It has been too long since we have seen the people who run theatres look happy, but Tracey, Steve and Ryan have every right to be.   They now have a modern theatre with all of the facilities to become an artistic powerhouse in the east of England.

The refurbished venue includes a transformed bigger, brighter foyer space which is open all day with a new café bar, redeveloped main auditorium with additional seats, new rehearsal room, revamped and extended backstage facilities, improved interval experience by doubling the number of loos, and most importantly for the first time the building will be accessible throughout. The new community space and dance studio is equipped to support the best new talent, and in addition, the company continues its commitment to sustainability including through the introduction of a ‘Bring your own cup policy’ to reduce single-use plastic, as well as increasing the buildings energy efficiency with the expansion of LED lighting, converting to 100% renewable electricity and the implementation of solar panels.

We were treated to a tour of the new, improved venue, it is impressive.  In the heart of the theatre, the auditorium, the changes have been subtle, every seat still affords a perfect view of the stage.  Backstage the theatre has been transformed from a dysfunctional collection of spaces to a state-of-the-art setting where performance art in all its forms can flourish. 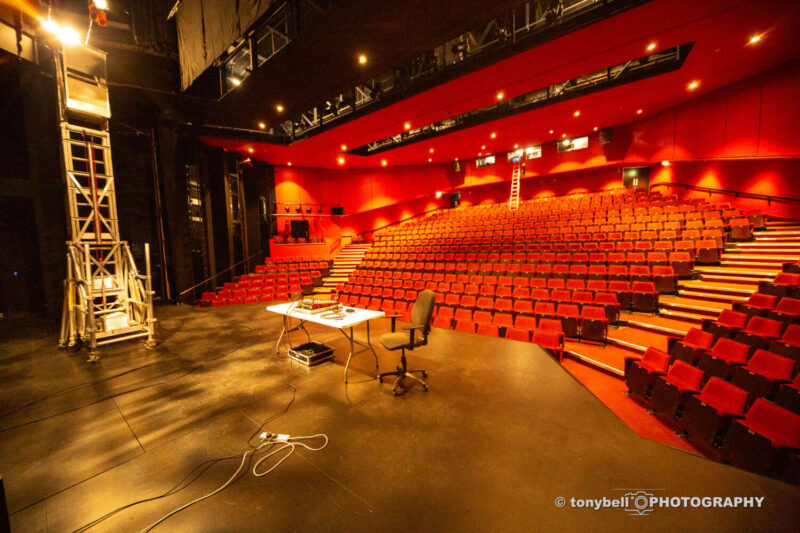 But what of the season ahead?  Having joined the theatre two years ago, only to see it close within two weeks, Ryan McBryde was keen to teel us what he has in store:

The season opens in July with Ken Ludwig’s Baskerville, directed by McBryde, followed in October by the UK premiere of Merlynn Tong’s Antigone directed by Dawn Walton OBE.

Also launching this season is Mercury Originals, a programme of ground-breaking new plays, showcasing the voices of local writers. The first production is a world première of Sirens by award-winning playwright, Kenny Emson, with future productions to be announced.

The year concludes with the return of pantomime, Aladdin by Andrew Pollard and directed by McBryde, with Great British Pantomime award-winning Antony Stuart-Hicks and Dale Superville, further casting to be announced.

The Mercury have commissioned Joel Horwood to write an adaptation of Stephen King’s novel The Green Mile which will receive its world premiere on the Colchester stage in 2022, ahead of a national tour. Further details will be announced in due course.

Mercury Theatre also welcome a variety of touring productions including The War of the Worlds, Tell Me on a Sunday, And Then There Were None, Dragons and Mythical Beasts, and The Jolly Christmas Postman.