New Album from The Shackleton Trio

The unmistakeable sound of The Shackleton Trio is once again showcased on their latest release, ‘Mousehold’. Recorded on the edge of Mousehold Heath in their hometown of Norwich, this captivating and compelling collection of songs and tunes takes the listener on a voyage across land and water.

The journey begins on Mousehold Heath, with No Road Across Mousehold. Based on the 1800’s broadside ballad ‘Crackshots of Norwich’ (Roud. V2919), the story warns of travelling across the heath whilst the territorial army practiced their fire. This is followed by Little Wooden Shoes, a song for the working class labourers who were forced to wear heavy clogs to keep focused on the job whilst levelling areas of the once sprawling heathland for development.

Self penned songs include Wild Man Peter, which tells the tale of Norwich’s famous wandering icon, Bird’s Nest Bound, inspired by the similarly titled song by Charley Patton, and ‘Eel Song’ – a celebration of our remarkable yet endangered European eel and a cry for our dying rivers and oceans.

These sit alongside the traditional Ballad of Barton Broad, collected by Peter Kennedy (Roud. 1781) from Norfolk singer Harry Cox in 1947. Sometimes referred to as ‘Barton Broad Babbing Ballad’, ’Babbing’ refers to an East Anglian method of baiting eels.

The album continues to demonstrate the band’s powerful and imaginative tune-writing and arranging with a host of new compositions, including Byard’s Leap, inspired by the Lincolnshire story of a witch and a blind horse which came to the band’s attention after numerous trips up (and down) the A17. Hold the Line and Mandy Lynn were both penned by Nic Zuppardi (mandolin) and arranged by the band, whilst their taste for Norwegian fiddle tunes is represented by their driving rendition of Annbjørg Lien classic Wackidoo.

The trio’s trademark flair for writing with groove and feeling, and an affection for sourcing and reworking largely unsung local ballads is once again demonstrated in this release, which features stunning linocut artwork from Nic Zuppardi, incorporating species native to Norfolk. Limited Edition hand printed artwork is available at concerts. 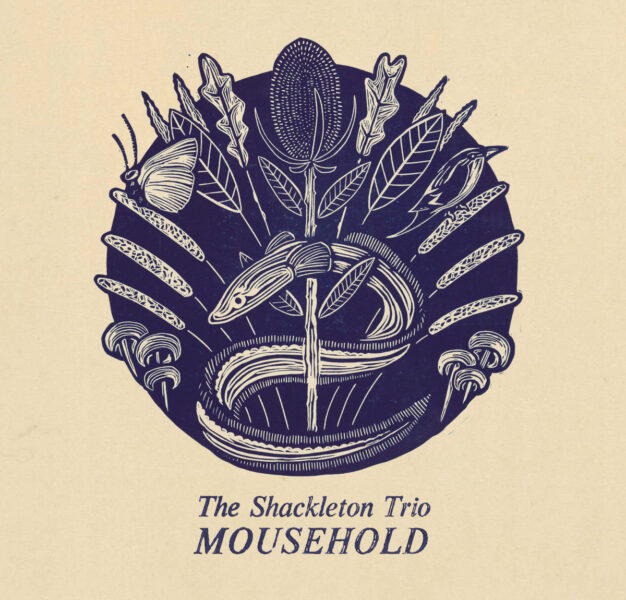 The trio are excited to present this new work after seven years performing together, during which time the band have been played on BBC Radio 2 and BBC Radio 4, with gleaming ★★★★★ reviews, and appearances on Cambridge Folk Festival’s prestigious main stage, as well as a host of UK and European festivals and international tours… and many miles in the Mondeo. They will continue to rack up those miles throughout 2022 as they tour the new album across England, Scotland, Denmark and Norway.

Mousehold was released on May 7th when the band played their first festival of the year at Cromer’s Folk on the Pier.

Click here for listings of The Shackleton Trio in our region.