The Darkness has released their brand new single ‘It’s Love, Jim’, the latest song to be taken from their forthcoming album Motorheart out on November 19th via Cooking Vinyl.

‘It’s Love, Jim’ is an all-out, high intensity, rock and roll barrage reflecting the unimaginable effects of an intimate encounter of the alien kind. The video captures archive footage of the band conducting a séance as a yearning otherworldly spirit unleashes its inescapable powers through Justin, Dan, Rufus and Frankie, as well as some unsuspecting cattle outside.

Regarding the single Justin says, “This song (herein referred to as “she/her”) is all about an extra-terrestrial goddess of other worldly beauty. She’s fast, powerful, not of this earth. Her sensual symphony nestles in your ear and lays mind eggs that seep confidence liquid into your brains. You’ll feel invincible all day long, and everything will go right after you hear it. Yeah, so it’s really catchy and should be number 1 all around the world please.”

‘It’s Love, Jim’ is the latest single to be taken from the forthcoming opus Motorheart; a record of immeasurable rock and roll extravagance, and yet another masterpiece from England’s favourite rock icons. The new single follows the release of the sensitive as a falling boulder ‘Jussy’s Girl’, the high-octane riffola ‘Nobody Can See Me Cry’ and the growling, pounding title track, which pays homage to a devoted sex robot.

Released in a wide variety of formats, including standard and deluxe versions, Motorheart is available both digitally and physically. There’s a heavyweight black vinyl album, limited edition colour LPs, CDs and an old-school cassette version. With exclusive bundles and signed editions to boot, it’s the complete aural experience from The Darkness, and a glorious addition to one of the most exciting canons in British rock music, all available to pre-order from the band’s Official Store 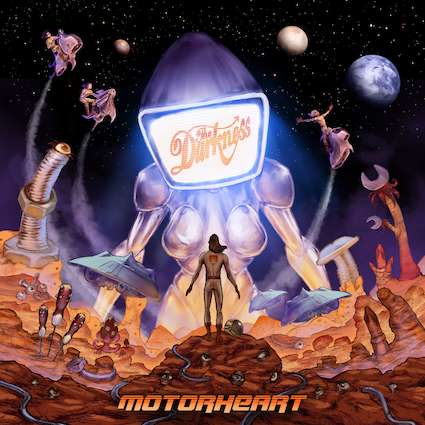 The Darkness will be showcasing the live potency of Motorheart on their extensive 22-date UK headline tour throughout November and December this year. A true spectacle to behold, fans will be treated to brand new songs from the album as well as hits from across their award-winning, platinum selling back catalogue. Support comes from Massive Wagons and tickets for all shows are available here.