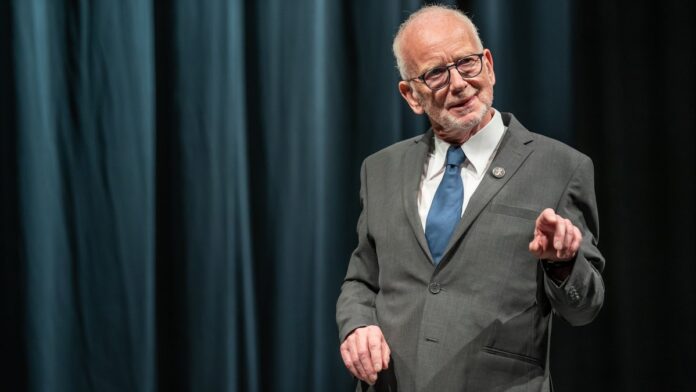 A play in two parts, The Lemon Table celebrates a love of music, live performance, and life itself. In the first half we are introduced to an obsessive concert goer who goes to unorthodox lengths to enjoy his evening. In the other, the concert’s composer reflects on the music he has created – his successes, his failures, and the life he has lived. In McDiarmid ’s own adaptation for performance, we encounter a spectrum of bitter-sweet
pleasures, wild eccentricity and dark secrets. A darkly funny and beautifully written evening that celebrates our return to live performance and the artists that make it.

Julian Barnes brings his unsentimental and wryly comic perspective to the complicated business of ageing in The Lemon Table. Published in 2004 as an anthology of short stories, each character is approaching the end of their life, with varying degrees of emotion. Barnes has earned respect as an author who is eloquent in themes of history, ageing, reality, and love. He won the 2011 Man Booker Prize for Sense of an Ending, and The Lemon Table won the Critics’ Prize at the Bilbao Book Fair in 2006.

Ian McDiarmid is an Olivier and Tony award-winning stage actor, as well acting in over forty-seven films. He is internationally known in the role of Emperor Palpatine in the Star Wars Prequel trilogy and reappearing in the role in the recent sequel series. McDiarmid is an admirer of Julian Barnes’ literature, and after recording a reading of The Lemon Table’s The Silence for BBC Three, he has adapted the work himself for this performance.

McDiarmid reflected that these ‘two connected stories from Julian Barnes’ The Lemon Table,
his witty and touching reflections on mortality and the workings of love, seem positively to invite the engagement and tensions of live performance.’

Michael Grandage CBE is the internationally acclaimed Artistic Director of the Michael Grandage Company, which has produced many productions nationally and internationally, including The Lieutenant of Inishmore and Red. From 2002 to 2012, Michael Grandage was also Artistic Director of the Donmar Warehouse, and recently he directed the new West End production of Frozen . Regarding the Lemon Table, Grandage has stated ‘Ian McDiarmid is the reason I’m a director. He has been my collaborator and mentor for over a quarter of a century. We’ve worked together many times, many of those times on tour – we both believe passionately in presenting work to as wide an audience as possible. This year, in particular, it felt important to share this beautiful piece by Julian Barnes with audiences nationwide.’

The Lemon Table is at the Cambridge Arts Theatre from Tuesday 2 – Saturday 6 November 2021. Suitable for age 12+ (contains very strong language).