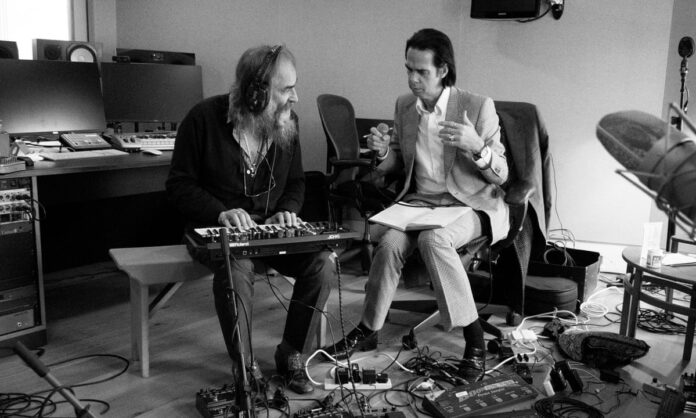 There was a lot of excitement around the announcement of an Ipswich date on this tour and the tickets were snapped up very quickly it seems. So a full Regent awaits the arrival of Nick Cave and long time collaborator Warren Ellis.

The line of people eager to get in snakes around the venue and up Woodbridge Road, and due to Covid checks it takes a while for everyone to get in. Continuous haunting music loops around the theatre until finally the lights are dimmed and we are off as the looped music leads into Spinning Song from the stripped down 2019 Bad Seeds album ‘Ghosteen’. The set leans to Ghosteen songs, and these songs like Bright Horses, so beautiful and bare, lyrically you feel the catharsis for Cave in this work, after the tragedy of losing a son. The audience is hushed, almost not wanting to breathe too loudly.

This is not a greatest hits tour, there will be no Red Right Hand or the likes of The Mercy Seat; although when a member of the audience shouts for it, Cave, on several occasions throughout the evening, jokes about not understanding the Ipswich dialect easily.

Usually Nick & Warren create soundtrack scores outside of The Bad Seeds, but they created a lockdown album titled ‘Carnage’, which we are treated to stunning live versions of the title track and stand out tracks Hand of God and White Elephant among others.

We get a surprise in the form of the early T-Rex track Cosmic Dancer and we dip into the back catalogue with a glorious version of God is in the House from 2001’s ‘No More Shall We Part’ album.

When not at the piano, the thin black duke is on his feet, with the trademark suit and the inimitable Cave contortions and movement, I am sure we still got the famed knee drop somewhere along the way! So lacking that usual heavy edge in the sound, we are seated in awe of this moving intimate performance which sees Warren on Electronics and Violin, and multi instrumentalist Johnny Hostile tackles everything else as required, and with Cave in perfect voice and on top form.

By the time our host says his thank you and the performers leave the stage, to applause and a standing ovation – though some keen Cavies had already ventured to the front to be touched by the hand of our dark story teller, which in itself looks like a biblical act.

This response brings an encore, our cast return, the three backing singers of T.Jae Cole, Janet Rasmus and Wendi Rose have offered a celestial quality throughout. Ipswich was in fine form in letting their appreciation be known and even got a second return to the stage. I think everyone rolled out into Sunday feeling they had witnessed something rather special.