Oliver Seymour Marsh is a member of The Bluejays, and I caught up with him ahead of their upcoming show Rave On: The Rise of Rock and Roll at the New Wolsey Theatre, Ipswich this weekend to find out more about the show, his influences and how they dealt with the past few years. 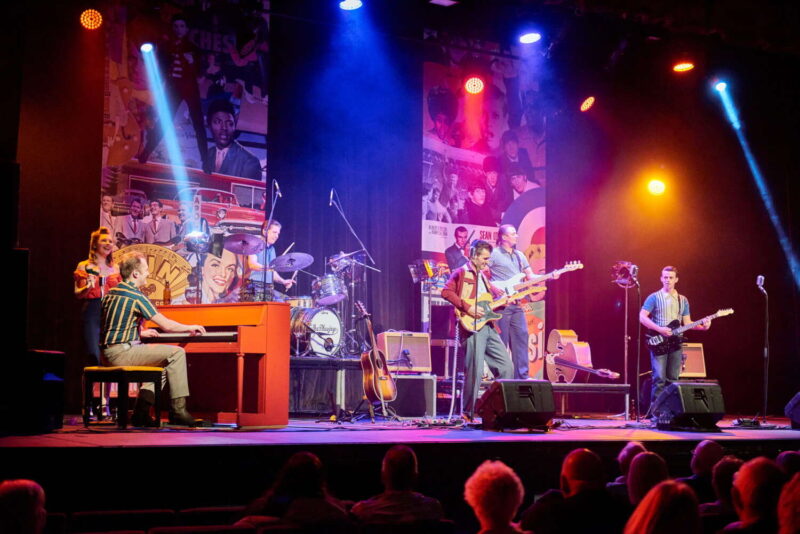 MR: First up, can you tell us a bit about yourself and The Bluejays, and your role within the group…

OSM: Hi, I’m Ollie, thirty four, I live near Bath and I front the band. I play some lead guitar and narrate the majority of the story throughout the show.

MR: How did you folks meet and come together as The Bluejays?

OSM: Our drummer, Dan Graham, started the band back in 2012 on a mission to bring top notch 1950s rock and roll music to private events and festivals around the UK. I came on board and we started writing our own theatre show in around 2015. Since then we have toured the world together, performed sold out shows at Chichester Festival Theatre, Coventry Belgrade, Worthing Pavilion and many more!

MR: Your latest show is ‘Rave On: The Rise of Rock and Roll’ – what was your inspiration behind the show?

OSM: Dan and I have performed in many theatre productions over the years, and I know how powerful theatre can be as a medium. The audience digest in a way you don’t experience on private events or even festivals. I have always been fascinated by how seminal 1950s rock and roll music was in the history of popular culture. It’s everywhere you look, or listen. The chance to tell the story of how rock and roll grew from humble beginnings, with its roots in gospel, country and blues music to, quite literally, changing the world, was a tantalising prospect. The set list took a lot of deliberation, but I think we’ve come up withthe perfect hit parade!

MR: Can you also tell us what audiences can expect from the evening…

OSM: We wanted a night of classic rock and roll, hit song after hit song, carefully interwoven with the story of rock and roll. From its birth in 1954, Elvis bursting onto the Memphis airwaves, all the way through to the sounds of surf music in the early 60’s, the British Invasion, the Brill building, Motown, so many studios and stories; Rave On tells the tale of rock and roll’s meteoric ascension! You can expect to hear some of the greatest songs of all time played with note perfect accuracy. You’ll be transported to another era. Sing along, dance in the aisles. It’s a great night out!

MR: Who is your personal rock’n’roll hero, and why?

OSM: Although I loved playing Buddy Holly in the Buddy Holly Story and Carl Perkins in Million Dollar Quartet, my personal hero is Chuck Berry. He was one of the wittiest songwriters of the 50s, a true pioneer of the electric guitar, an influence on countless musicians, a man of sartorial elegance with an electric stage presence. He broke down boundaries, a LOT of boundaries!

MR: It’s been a tough few years for musicians, so what were you doing to keep busy?

OSM: We recorded and produced an entire album throughout lockdown. It’s called ‘Airstreaming’. Remotely, of course, we would send musical parts to each other, in some cases around the world, mix down the tracks and recreate song a_er song. It was a chance to tackle some material we were more unfamiliar with, but there are plenty of classics too. My proudest moment, also my favourite track on the album, was mixing around thirty two different parts to create Phil Spector’s ‘Wall of Sound’ masterpiece ‘Be My Baby’. We used twelve musicians in total, but it’s our female lead vocalist, Amelia Rendell, who does the most phenomenal job in bringing the song to life. You gotta hear it. We even got the thumbs up from Ronnie Spector herself!

MR: What did you miss most about live gigs, and how has it felt being able to perform again?

OSM: Everything (Even the get ins and get outs), and sublime.

MR: Have you ever been to the New Wolsey Theatre in Ipswich before, or do you have any connections to the area?

OSM: No, I have never been to the New Wolsey! I toured to the Ipswich Regent Theatre with a show called ‘One Man Two Guvnors’ about eight years ago though. I do also have a couple of friends who have performed in the New Wolsey’s ‘rock and roll pantomimes’ that I understand are hugely popular at Christmas!

MR: If you could have written any song from the era, which tune do you wish you had a hand in?

OSM: Bill Haley’s ‘Rock Around the Clock’ was the biggest selling hit of the 1950s. My pockets would have appreciated that one. Otherwise, to have sat in on sessions with Jerry Leiber and Mike Stoller, who co wrote songs like ‘Jailhouse Rock’, ‘Yakety Yak’ and ‘Stand By Me’ would have been incredible. ‘Leiber/ Stoller/Seymour-Marsh’… it’s got a ring to it, hasn’t it?!

MR: Is there anything else you wish to add?

OSM: We’re grateful to the New Wolsey Theatre for having us on board. It’s always an honour for us for the show to play a prestigious new venue and we hope the wonderful people of Ipswich enjoy ‘Rave On’ – see you there!

Thanks to Oliver for his time, we look forward to seeing the show at the New Wolsey theatre, Ipswich on Saturday 26th February!

Facebook
Twitter
Pinterest
WhatsApp
Linkedin
Email
Molly Richardsonhttp://www.GrapevineLIVE.co.uk
Molly has a passion for all things entertainment. When not at the theatre, cinema or a concert, she's often found reviewing or blogging about it!