Newmarket Nights are afternoon/early evening races with a big named-artist in the evening – an exciting event and one of the biggest I’ve been to since the first lockdown, and probably for many others too, I was ready. This night was Olly Murs!

Large crowds were at Newmarket both for the racing and the show, however there is plenty of outdoor space for all to mingle about and have a feeling of staying safe. Plenty of food & drink outlets and screens for the racing, they have it all covered. 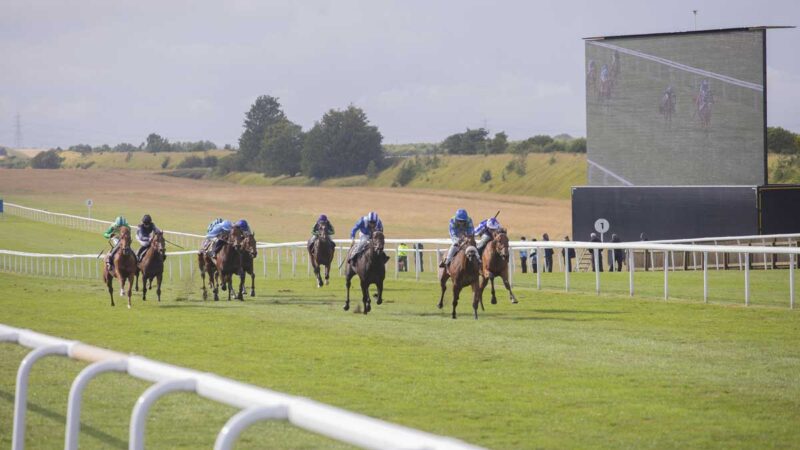 Once the last race had finished, the crowds were moving towards the main enclosure – we had ‘Premier Tickets’ and could go to the front paddock facing to the stage.

A background track sounded to get people in and settled and then Olly came out on stage in a blue suit to a huge cheer and applause. His smile and twinkle in his eyes looked like he was just as pleased to be there as we were.

His band then came out, it was a full band set up with additional 3 brass, 3 backing singers for a brilliant blasting sound coming from the speakers – it was an excellent set-up and the sound was completely spot on, you could hear Olly’s voice, the backing singers and all the instruments – well done to the sound crew for an outside gig.

Olly and the band were entertaining us for an hour and a half and there was energy from the first note to the last. To be honest it went far too quickly as it was so much fun. Olly brings the pop magic and the cheeky chappy charisma to the stage and kept us all engaged and enthralled for the entire set. He even threw his jacket into the crowd at one point. 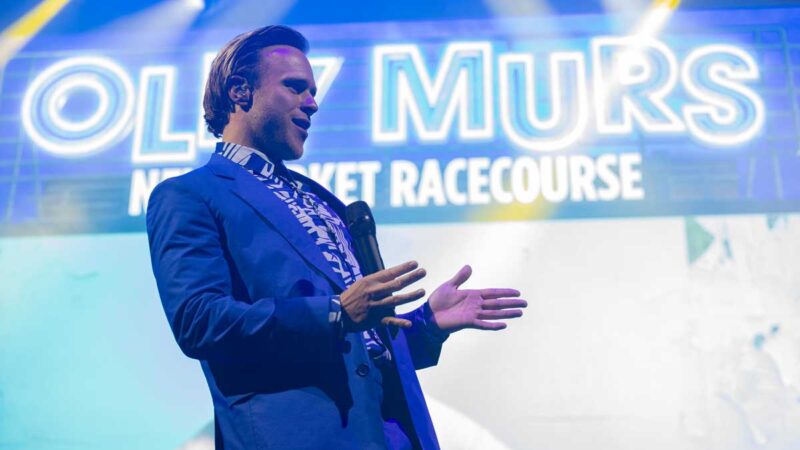 He gave us his crowd-pleasing hits, such as ‘Heart Skips a Beat’, ‘Dance with me Tonight’, ‘Troublemaker’. There were covers: ‘What’s Love Got to do With It’ and ‘It Wasn’t Me’ as well as a few medleys, including an Earth Wind & Fire one. Everyone was singing and dancing with arms in the air waving and clapping. Olly got the certainly got the audience going. I saw all ages and genders dancing – you couldn’t help yourself if I’m honest.

Unfortunately for him, Olly injured his knee during the performance, but carried on regardless. Although he still gave a great performance, my goodness you could tell it was hurting.

As the sun was setting, the lights and smoke were in their element the whole evening was even more atmospheric. It added to the amazing night. Olly did have a bit of chat with us, but not too much. The songs flowed into each other several times to keep the show moving along at a pace.

The screens around the complex showed a great vantage point there were speakers pumping the concert around the food & drink area therefore I doubt anyone missed out.

Olly’s voice was solid all the way through the concert and as expected he sang a dedication to Caroline Flack with ‘Sweet Caroline’ which was heart-warming and everyone joined in.

It was a great concert at a superb venue. Certainly worth seeing what else is on for the Newmarket Nights.