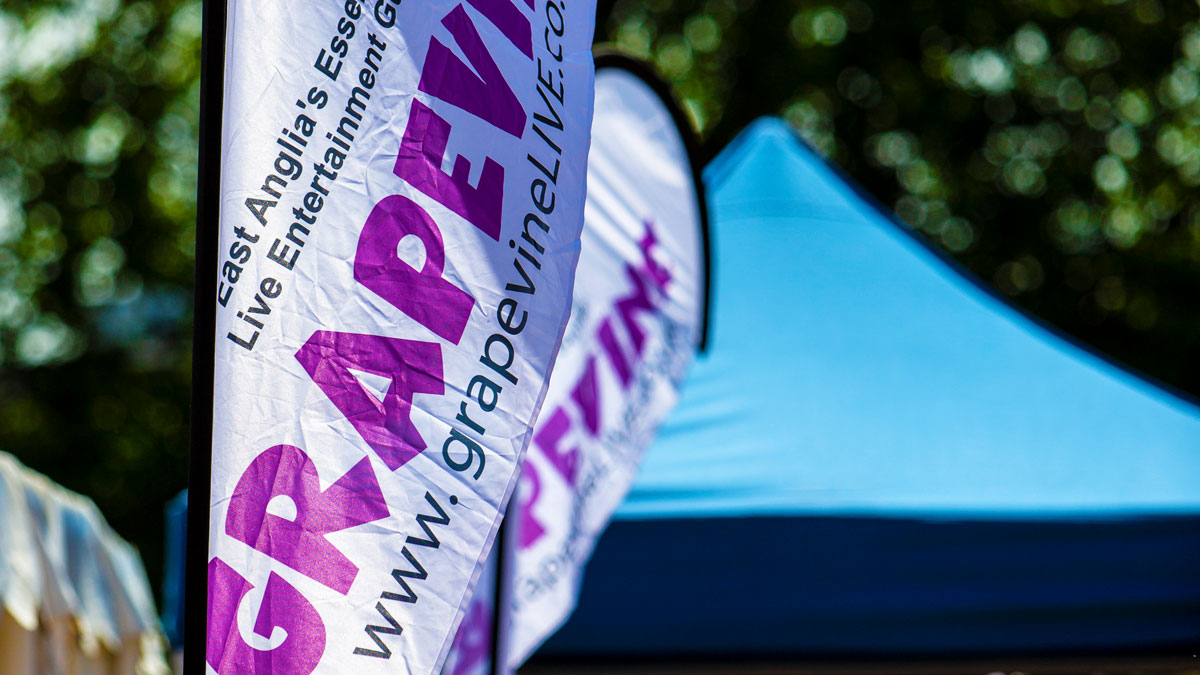 Now that’s a turn up!  My image archiving systems has an ‘on this day’ feature.  I get mild amusement out of it but today’s image was a bit poignant to say the least, from five years ago, the first of our Grapevine flags in a very empty looking office.

Sunday would have been Ipswich Music Day a chance for the team to get out of the office, welcome a dozen or so musicians to our stage, and enjoy a day of live music on the lawn of Christchurch Park in Ipswich.

Although it seems like forever, I’ve not been involved with Ipswich Music Day for that long.  I first became aware of it when my son and his school friends started going about fifteen years ago.  Then I started photographing the event for Grapevine but in recent years I have been part of the Grapevine team running their stage on the day so recently I’ve only ever seen the acoustic acts.

It is a unique event.  To start with it is free.  On top of that you have not one but six main stages on the park as well as events going on in Christchurch Mansion, the Masonic Hall, St Margaret’s Church and Bethesda Baptist Church.  Over the course of the day you could sample live sets from something like sixty artists if you were very quick.  I once tried to photograph as many bands as I could one year. For a flat county there are a lot of steep hills in Christchurch Park!

The Grapevine stage itself – the only covered one on the park, is erected by contractors working for Ipswich Borough Council. Theoretically all the Grapevine team need to do is just turn up, but if you believe that you are wrong.  Our involvement begins at the beginning of the year as part of the selection committee who go through all the applications.  We also produce the programme for the day, once that used to be a supplement in the July issue of Grapevine

For the core team it is a long day, getting there at about 8am to dress the stage, the music starts at noon and ends about 6pm which is when we get to do the breakdown – typically we will leave about 8 or 9pm.

By far the best part of the day is when you see a crowd sitting around enjoying the music – especially when the acts are new and maybe the audience is hearing them for the first time.

Not being part of the Ipswich Musc Day experience this year feels really odd, but then we are living in strange times. Even the selection committee didn’t got to meet because of the pandemic.  So we can’t even celebrate who might have graced our stage.

It can be a long exhausting day but we love it, its what Grapevine is all about – live music.

I may spend some time today digging through my Music Day archives.  What’s your favourite memory of Ipswich Music Day?  Let us know on our Facebook page…

We Will Be Back

Pizza, Live Music and a Pint