‘Painting the Silence‘ have released their debut album ‘Dream Machine’ in December.

I saw them supporting ‘Beautiful Dangerous’ earlier in the summer and thought this was an interesting duo.

This is a ten track album, no-one is being short changed here, a full album which is uniquely powerful and seems to gain more depth the more I listen to it.  It’s nice to hear a debut album which is not overly produced, or trying to be something they are not by throwing everything including the kitchen sink at it. How they sound on the album is how they sound live, and this is what the fans want to hear. No extra bells and whistles going on – that would spoil it.

A duo of piano and vocals: two instruments each with a wide range. A simple combination yet produces some powerful original pieces. There is a raw passion in the singing and wonderful piano playing from Patrick, he must be classically trained.

The songs are filled with stories and there is a pain to James’ voice alongside his deep tones, and the layered harmonies add a depth to the emotions of the tracks. There is light and shade to the songs which tug at your heart as you feel the build-up and the piano just draws you into emotional sound of it all. There is a melancholic theme, however it’s almost joyful at the same time and gets better the more times you listen to it as you absorb their music. 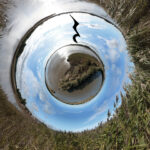 There are exploring their sound well and it hints at the ballads of Nik Kershaw, Howard Jones or even Boom Town Rats  – those stripped back songs which were not mainstream pop but which were enjoyed.

This isn’t an album I can categorise, I can say it’s not pop, it’s music on the outskirts which makes you stop and listen. The album is natural and raw, which is its charm.