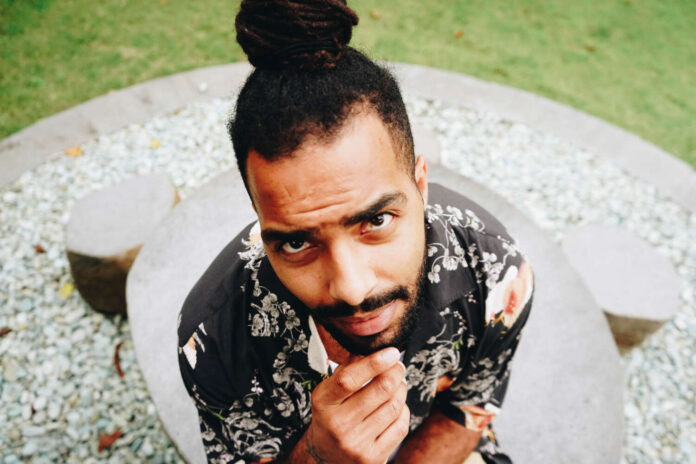 Ipswich-born Parris Robbo is an artist with the ability to seamlessly merge genres in between unique spaces of Rap, RnB and Electronic music that are otherwise largely uninhabited. From loving to loathing, living to dying, Parris’ perspective and approach always makes for a unique journey in sound and thought.

He will be performing at Sound City Ipswich on the Friday, his first live show in almost two years. See what he had to say about his music, year, and what to expect from the gig as he caught up with us from Bali…

Well I’m a recording artist, born in Ipswich and my music tends to be rap and RnB based, but usually in quite an experimental way that blends elements of various genres. As for the content, I try to make sure there’s some substance to it; food for thought and what not, but sometimes it’s just a vibe!

What inspired you to get into music, and has it always been part of your life?

Both my parents had a love for music and an eclectic taste, and they definitely passed it onto me and my siblings from an early age. Then when I was around 10 or 11, garage was popular and I decided I wanted to try MCing. I told my older sister and she gave me my first MC name and lyrics, then I just became more and more engrossed in music as time went on.

How has the past year been for you – what have you done to keep busy?

It’s actually been good despite the pandemic. I flew out to Bali to be with my partner just after the first UK lockdown and I have been with her in Indonesia since then. I’ve managed to keep busy releasing music and living life; experiencing some amazing places in Indonesia so I can’t complain.

You recently released an EP – how has the response been so far?

The response has been good generally. Songs from the project have been played on radio by various DJ’s who I respect for their talent and taste and I’ve gotten praise on its impact from listeners. I always feel that my music is underexposed due to various factors, but the people who it reaches always show me the music isn’t the problem. I have great people around me who help with the creative side, so once I build an equally great team around the marketing and distribution then I’m confident the exposure will get to where it should be.

What have you missed most about live gigs, and how is it being back on stage?

I’ve missed the energy and the connection that you feel at live shows. It’s one of the best ways to experience and showcase new music in my opinion and it’s key to building a solid fanbase. Sound City will be my first time back on stage since before the pandemic so I’m really looking forward to it!

How did you come to get involved with Sound City Ipswich?

I was contacted about joining the line-up when it was initially planned for October 2020, but obviously that was postponed. Then I was asked if I was still down to perform this year and of course I said yes!

What can you tell us about the performance you’ll be doing?

Just that I’ll be taking almost two years of pent up performance energy and leaving it all on the stage!

To those who love live music, what would you suggest they can do to support the industry?

Get down to small venues and events, buy merch if it’s on offer and make noise online and in person about the artists and events you enjoy.

What’s next on the agenda for you?

Growing my fanbase, gaining more exposure, evolving my sound and empowering people while I do it!

As a fun one to end on: who would you love to duet with and why?

Frank Ocean because he’s a generational talent and one of my favourite artists ever.

Thank you to Parris for his time! For more information on Parris Robbo visit soundcityipswich.co.uk/parris-robbo.