Home Theatre Rehearsals are Underway for Around the World in Eighty Days! 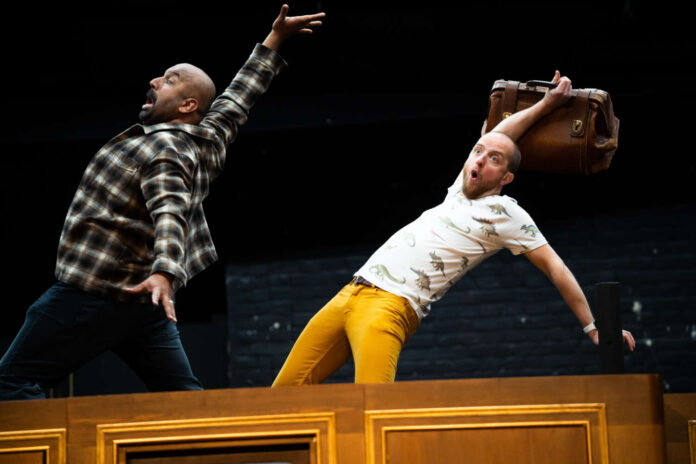 Rehearsals began this week for Theatre Royal Bury St Edmunds’ own production of the Jules Verne’s classic adventure story, Around the World in Eighty Days. This story of an English gentleman accused of robbery who makes a wager to go around the world in eighty days features gags, character changes and actors running all over the place.

Toby Hulse’s charming adaptation of the comic adventure takes the hilarity of the original novel to new heights, reducing the cast to just 3 actors, and transporting the audience to locations all over the globe, even though the set remains minimal!

First published serially in 1872 and then as a novel in 1873, this period saw breakthroughs that opened up the possibility of speedy, comfortable and safe travel across the globe: the completion of the first Transcontinental Railroad in America, the linking of the Indian railways across the sub-continent, and the opening of the Suez Canal. These breakthroughs brought the dreams of everyday people being able to travel the world a reality, something only previously done by experienced and hardy adventurers!

Verne’s farce was one of the most widely-read novels of the 19th Century, garnering him worldwide renown, and remaining to be a popular title, even today.

Around the World in Eighty Days is the perfect show for Theatre Royal’s reopening. After over a year of being stuck at home, what better way to return to theatre than an adventure exploring the world and all its magic that we have been missing. A production so overly theatrical that it attempts to make up for all the live theatre missed in the last year.

Around the World in Eighty Days is at Theatre Royal Bury St Edmunds from Friday 21 May to Saturday 5 June 2021. Tickets on sale now at www.theatreroyal.org.
Warning: Gunshot sounds, haze and strobe lights