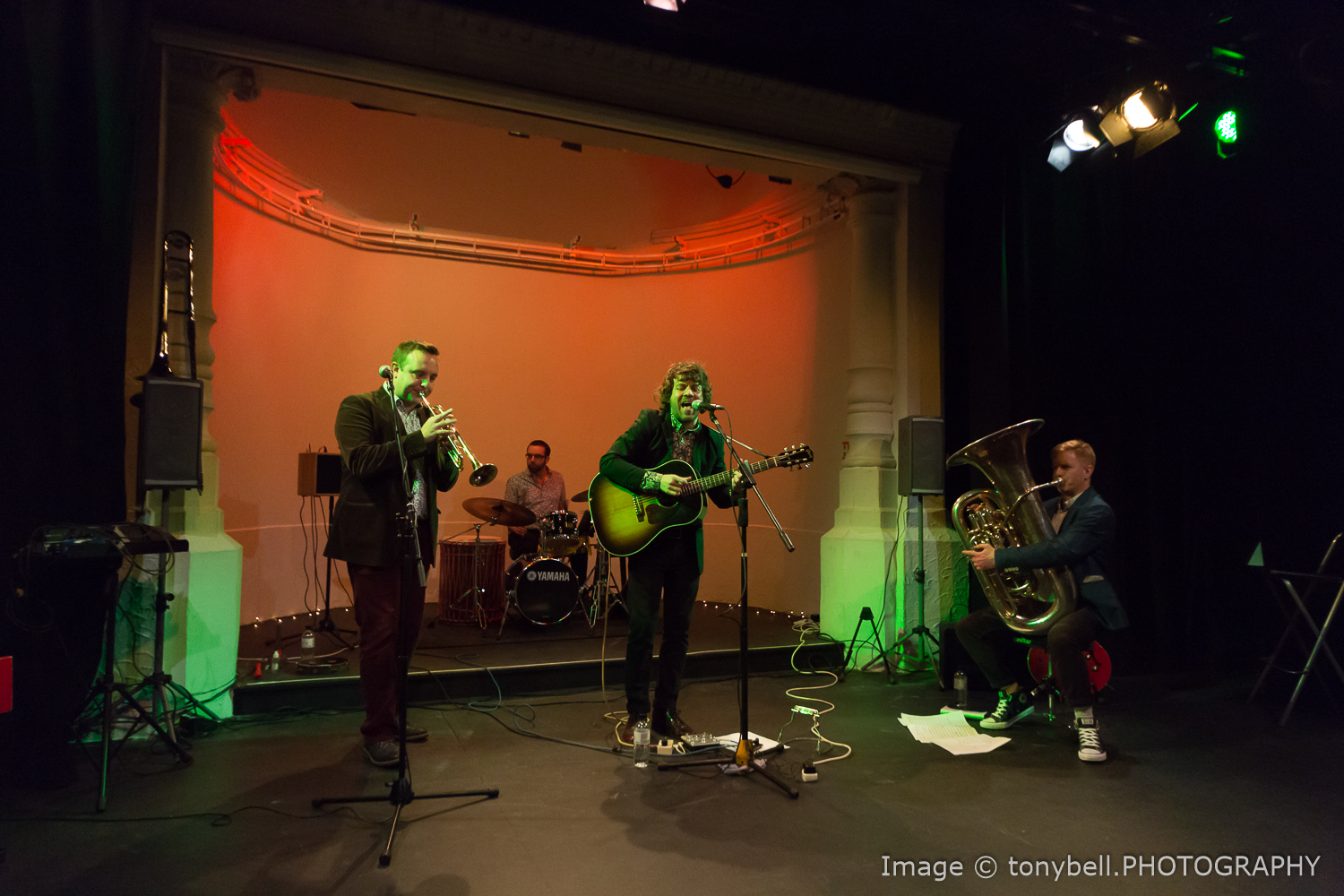 Grapevine is no stranger to the musical talents of Ady Johnson, he has played our stage at Ipswich Music Day and was our October CoverSTAR this year.   Billed as the Ady & Adrian live Christmas Special this was in fact a pre launch for Ady’s second album ‘London Songs’.

The man himself is the first to admit that playing an album in full, in the order in which it appears on the finished product is a wonderful idea in theory, less so if you use unconventional tunings and have at least one number played in a minor key.   But all of this is but technicality, the real essence of the evening was how it all sounded in this intimate little venue in Colchester, and it sounded marvellous.

Ady’s song writing is inventive and he presented us with a very personal collection of work based on his experiences since leaving Colchester to live and work in London.  There was the quirky ‘Bloodshot Eyes’, an abject lesson in how one should take care when trying to make eye contact across a crowded room to the very personal ‘Bring You Back’ a song for his gran who suffers with Alzheimer’s disease.  My own personal ear worm of the evening being the knickerbocker nonsense song called ‘New Year’s Day’!

The band for the night were very much there to add to the experience of the performance – a hint of sax, a burp of tuba and the kiss of a snare drum all in the right places brought not just life but vitality to the songs.  Toby Bull was having far too much fun playing an array of primary school musical instruments, Tom Briers on sousaphone and electric bass and Adam Morris on percussion.

I mentioned that this was a pre launch of ‘London Songs’, let me explain.  The hard work has been done – the songs written and recorded.  Now comes the trickier bit – producing, marketing and selling the album.  To help fund this a ‘Pledge Music’ campaign has been launched – you can pre order the album and get exclusive access to updates and merchandise.  You can find out more about that here: https://www.pledgemusic.com/projects/adyjohnson – who wouldn’t want to have Ady play live in their front room?

The launch is planned to take place on 23rd February, Ady was kind enough to give Grapevine a pre-release version of the CD.  Listening to it on the way home was a wonderful way to extend the night for the recording differs little from the live performance, speaking volumes for both.

Opening for Ady was his friend and guitar master Adrian Nation.  In the quirky way that life happens I had never heard Adrian play live until tonight, my loss.  This man does not play his guitars, he caresses them and in return they join him in song for together they are one.  His song writing is none too shabby either, ‘Benderloch Stone’, an intensely personal story which will resonate with anyone living far from home.

Ady and Adrian concluded the evening by playing a duet, the beautiful Steve Earle composition ‘Nothing But a Child’.  It was a lovely way to conclude a wonderful evening in the company of a respectful listening audience.

The night’s venue presented me with another first, for I had never been to The Headgate Theatre.  This small, intimate venue in the centre of Colchester is a gem.  Like many such venues it relies on volunteers to make things happen and they do so in a warm hearted, welcoming manner – we’ll be back.

Sleeping Beauty on a Bus!

The Famous Four and a Half Go Wild in Thetford Forest