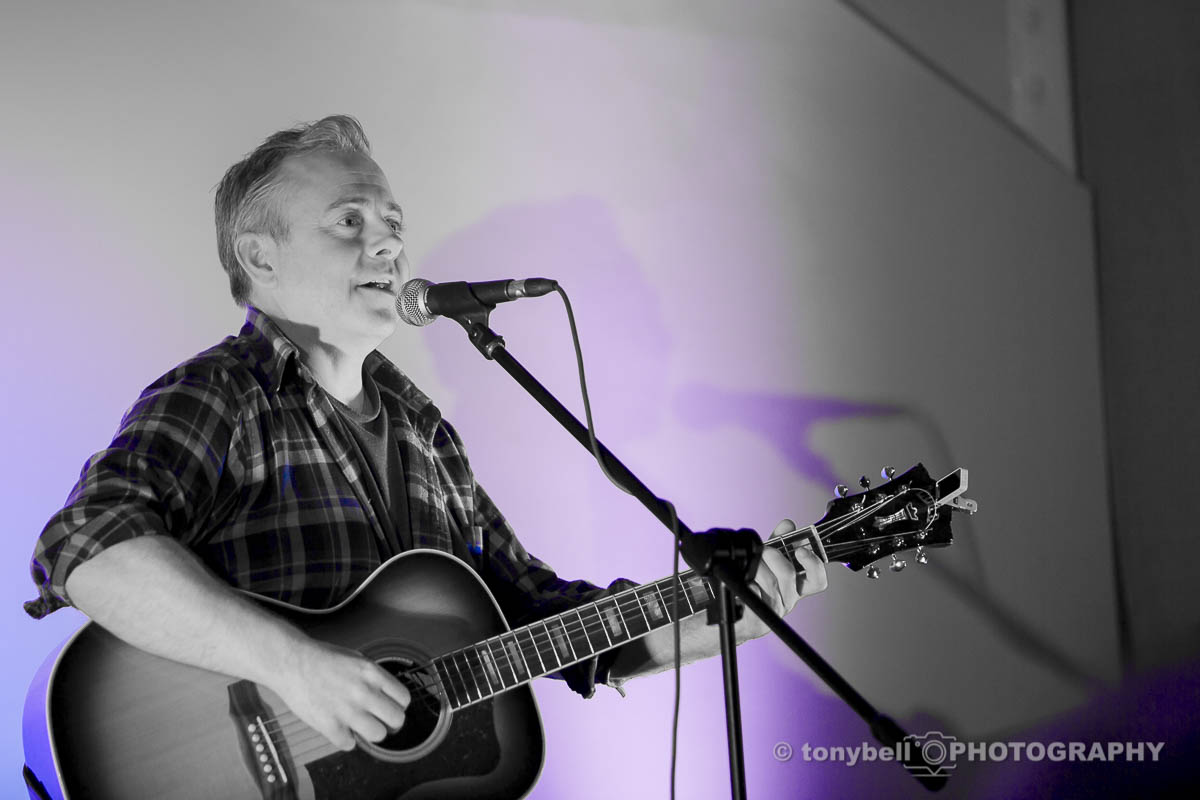 Peter proposes to Alex at the end of his gig.

As concert encores go, Peter Hepworth’s was quite special.  “I have three more songs! He told us, as the evening drew to a close. “No, sorry, I have two more songs and an encore.” He corrected.  As he finished his last song “17 Sun Lane” we knew that this magical night had come to an end… until that is, Peter walked into the crowd, got down on one knee before his partner Alex, produced a ring and proposed.

And there we were thinking when we arrived that the night was all about launching his single “Pale Blue Blankets”!  Let’s rewind a bit and start at the beginning, shall we?

We struggled to find “The Longshed at Whisstocks”, the venue for Peter’s gig.  Then we spotted Kal Lavelle sitting outside on the ground, leaning against the shed, having a final practice and knew we were close.  Then Peter’s invitation for us to park IN the shed clocked up another first for us.  Covered parking almost under the stage – or car deck C as I felt obliged to call it.

Peter seemed nervous, but then this was a very special gig for him… little did we know just how special he intended it to be!

Peter is a humble, gentle man with a talent for writing songs and performing them well.  He gets his audiences involved straight away, no rehearsals for us as he opened with “Blue Paper Kites” and we were led straight into the chorus as his backing singers!  When I listen to Peter’s songs I am reminded in parts of Leonard Cohen, elsewhere it’s Mumford and Sons – neither, if memory serves, have done too badly for themselves in the music industry.

Despite those echoes, Peter’s music is uniquely his own and deserves a much wider audience. The alleged purpose of the night was to launch his first ever single, “Pale Blue Blankets” written for and about his young daughter.  Now his music is out there to search for, share, buy and download – go do it!  At the most basic level he needs to put food on the table, but better than that, you will enjoy listening to his music.

Having promoted other people and their music under his Blue Bus Tour brand for many years it was appropriate that opening the evening were the relatively new duo of Seth & Eliza.  Each talented in their own right, together they produce a wonderful blend of guitar, violin and vocals.  I look forward to tracking their progress over the coming months and years.

Sandwiched between Seth & Eliza and the headline act was Irish singer songwriter Kal Lavelle.   Kal has a track record of supporting her friend’s gigs.  Seem to remember she went on tour with that red-haired chap from Framlingham once…

I had the pleasure of interviewing Kal many years ago and it was good to catch up.  Her song writing is as good as ever, her delivery better – if that is possible, and her song “Shivers” as moving last night as when I first heard her play it at the John Peel Centre.

Why, oh why does it take emotional turmoil to bring out the best  in artists – her break-up song was beautiful, if sad.  For the briefest of moments when she spoke about breaking down in the queue in Iceland I had visions of the check-in desk in Reykjavik!  Far more romantic than a frozen food supermarket but not a true reflection of life – which is what both Kal’s and Peter’s music evoke.

A wonderful night of music from all but completely eclipsed by what followed the encore.   From the team at Grapevine, many congratulations to Peter and Alex on your engagement.  As gigs go, that one will be a tough one to top Mr. H!