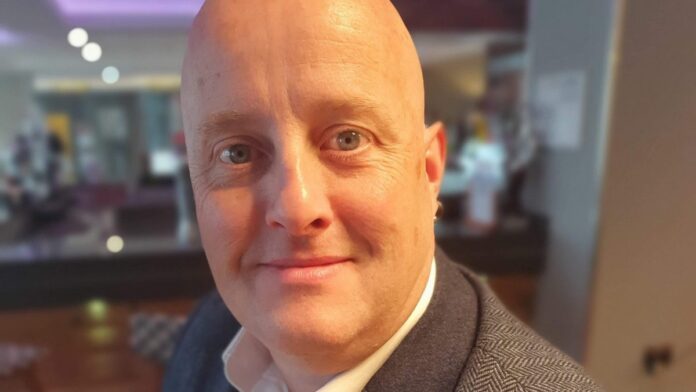 Richie Ross is the Theatre Director of New Theatre Peterborough; a theatre of which had a very short-lived relaunch in 2019.

We spoke  to him to see how things have been going over the past year, and ahead of their reopening at the end of August.

Firstly, let’s start with an introduction! Tell us a bit about yourself and your role at the New Theatre Peterborough…

I’ve been the Theatre Director at the New Theatre since our relaunch September 2019. I actually started working here months before that, as we had to start from scratch and build up the team to deliver the great customer experience.

I’ve been involved in the theatre and entertainment industry since leaving school at 16! I literally left school on a Friday and started working in our local nightclub on the Monday. I used to go in during the day and look after the bars, stock and cellars, and then at night I used to be a lighting jockey. I used to really get on my sisters nerves, as she was 18 and had to be home by midnight, but I was 16 and used to get home at 3am in the morning!

Over the following years I owned and managed a number of different club and bars and got into the theatre industry back in 2000. You could say I’ve sent all my working life giving people a great night out! My role here is to be a leader who manages and a manager who leads.

What inspired you to get into theatre, and has it always been part of your life?

My theatre life started out back in 2000 working for an agent in the West Midlands. We used to book acts for cruise ships, clubs, holiday parks and I then got involved with a theatre production company they also had and ended up buying into it. That put me on the road around the UK, visiting probably every theatre in the UK at some point! I then got asked to tour management for other producers and ended up working around the world on some pretty big arena and theatre shows. When I decided to come back to the UK it seemed a logical progression, taking into account my career path to move into theatre management. I still love it as much as ever, and I still get a lump in the back of my throat for a great finale and seeing the happy faces of people leaving our venues.

Given the challenging year and a half the arts have faced, what have you done to keep yourself busy?

When lockdown first hit none of us knew for how long or when. Initially we kept a really small team of people together to reschedule shows and move ticket holders but this became every increasingly difficult not knowing of and when there would be a light at the end of the tunnel bearing in mind we were dealing with shows and tickets across our other venues as well. As we now look to reopen, some shows have been moved 2 or 3 times but we’re confident that the later part of 2021 and well into 2022 is looking really healthy.

In addition, how have you kept the theatre secure for moving forward?

I’m not going to lie, the entire industry was on its knees 12 months ago with no direction from the government as to whether we had a future or not. However as soon as they announced the release of Culture Recovery Fund there was at last some glimmer of hope and also recognition of the value this industry gives to the well-being and economic growth across towns and cities throughout the UK.

That was most definitely a life line and we were fortunate enough to be awarded a grant. A second round emerged and unfortunately at the last hurdle the criteria changed for applications and so we weren’t eligible. However we canvassed the government and Arts Council England with support from Paul Bristow MP and we awarded a further grant which sees us through to our doors opening again.

What are your thoughts on the influx of digital shows – do you think it has been a positive or negative thing for the industry?

Definitely positive – it’s been fantastic to see content appear online and reminding everyone of why they love live theatre. I don’t think it replaces it, but it’s just a different experience. It’s also created work for practitioners, creatives and technicians at a time when the majority saw their income dry up over night.

You are planning to reopen soon – what can you tell us about the upcoming season?

Oh my god – there’s loads to look forward to! My personal favourites are John Bishop, Jimmy Carr and the UK premiere of the smash hit Broadway musical Bring It On before it transfers to London. One of the benefits of being a Selladoor company is that we can tie in with the production arm and be the first to launch new shows. This is definitely a massive plus for us and the city. My heart is always in live music so Marti Pellow is going to be awesome, and of course we’ve got panto to look forward to which this year is Aladdin, which features Rufus Hound starring in his first ever panto.

What can audiences expect on their return, particularly those who might be wondering about safety?

One of the positives to come out of lockdown is our collaboration and working relationships with The Cresset and The Key Theatre. We’ve worked extremely closely together to put together a set of protocols across all venues to ensure our customers safety and well-being. I have some level of frustration that the government haven’t been more decisive in their expectations. I just hope that customers will have the courtesy to treat each other with respect, and accept that people have differing views on how we emerge from this pandemic.

What would you advise those who love theatre and the arts to do, in order to keep supporting the arts industry?

Keep buying tickets! No matter what’s on the stage, it all ends with someone purchasing a ticket. We’re also in the process of launching a new membership schem,  and you can also support us further by dedicating a seat to someone. With Christmas coming, consider a theatre gift voucher – whatever you decide the continued support of our loyal customers is very gratefully received.

Do you have any other projects or news that you wish to share?

We’re working on some really exciting projects and collaborations for the immediate future and into 2022 and have some amazing shows not yet announced so I’d urge anyone wanting to find out more to make sure you follow us on social media platforms and sign up to our newsletter at www.newtheatre-peterborough.com

As a fun one to end on: If you could meet any actor in theatre, who would it be and why?

Any actor? Oh geez that’s a hard one to answer! I have the pleasure in working in an industry where I’ve met some incredibly lovely people. Definitely top of my list is Joanna Lumley. She even made me a cup of tea and we had a good natter whilst she ironed her stage outfit! Going to see a show is a bit of a bus-mans holiday for me, although I really enjoyed the UK tour of Hairspray and Sister Act. Anything that’s in your face is a bonus for me!

For more information or to book any shows visit www.newtheatre-peterborough.com.