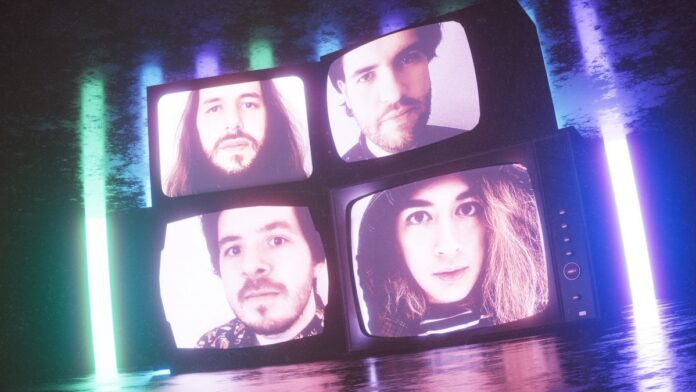 You may know Robin Johnson as the drummer in the band Kyros, which he’s been a member of for about eight years. He can also play classical percussion and is a session drummer.

Kyros comes from a progressive rock background, but has a pop and eighties pop music influence throughout their tracks. They like to bring whatever styles of interest to them into the folds of what they do. As a result, their sound is becoming more eclectic, but progressive pop-rock describes it in a nutshell.

During the pandemic, the band have been putting out a series on YouTube videos called the Celexa Streams, which are essentially a series of virtual gigs, which helped to promote their 2020 album, Celexa Dreams. Each session included a range of cover songs and Robin was excited to share that, as a result, they are due to release a compilation album, with the cover songs from the sessions as well as some new recordings, which are set to be released in August.

In addition to the five cover songs recorded in one of the live streams, they then recorded another song around Christmas time and a further four songs this year. Robin adds: “One track that I’m particularly proud of is our cover of the Rush song ‘Where’s My Thing’. It was a song we were planning on covering for our gigs in March last year, which never went ahead because of COVID, so it had been side-lined for a while and I’m really glad to see it emerge on this album. It’s a bit of a tribute to Neil Peart, the drummer from Rush who passed away last year.”

The band was also lucky enough to have three special guests on the album. One of them was John Mitchell, who co-owns their label and is from the band Frost, so they covered one of his songs and he was nice enough to sing on it. They also covered a Haken song called ‘The Good Doctor’, of which Haken’s drummer, Ray Hearn, came and played drums on. Lastly, Andy Robinson from the band Ihlo came in for guest vocals too.

“We’ve been very busy as a band. Although we haven’t had any live gigs, we haven’t really slowed down. In some ways, I think we’re more productive than ever now!” Robin adds.

The streamed sessions seemed to be a hit, so I asked for Robin’s thoughts on the move to digital, and he detailed, “For me personally, not playing gigs is very tough. It’s definitely one of the things I love to do the most and I’ve seriously missed it; but as a band, I think the transition to the digital realm was quite natural for us. Maybe compared to some bands who weren’t so used to it. We’ve been trying to embrace streaming because I think there are some positives that come from that. There are certainly a lot of people interested in our music now; who I think wouldn’t have been if it had not been for that.”

For Robin, he may not have ever been to Cambridge before, but he’s really looking forward to the experience of playing in a new place and venue. Even more so for the fact it’s a shared headline with the Paradox Twins at the Portland Arms. Speaking of the tour, “It came around because we’re both on White Star records, owned by Chris Hillman and John Mitchell. I personally know the bassist from Paradox Twin, Diane, as we played in another band together called Ever Hazel. But I’m really looking forward to the tour, I think it’s going to be a lot of fun. I like their music a lot and there’s a mutual respect between the two bands. It should be a blast!” Robin comments.

I ask what his message to fellow music lovers who have missed live music would be, and he replies “My message would be to come along and enjoy it. If you’ve already been missing live music, it would be great to see you at these gigs. Of course, I understand that safety is still an issue at the moment though and that even by the time of our tour, not everyone would have necessarily been fully vaccinated. I’d love you to come and see the gigs, but stay safe and do whatever you feel is appropriate.”

When I asked who Robin would choose if given the chance to collaborate with any artist, he responds “My answer is potentially quite left-field for the kind of band we are but I’d love to collaborate with Disclosure, just to see what happens. I’d have no idea how it would turn out, as they are a house music act, which is nothing like what we do, but I think they still have some common ground with us in terms of the production.”

You can check out Kyros’ new single here:

Kyros and The Paradox Twin are playing at the Portland Arms in Cambridge on Tuesday 31st August, 8pm. For more information or to book visit theportlandarms.co.uk / seetickets.com.