New Wolsey Theatre in Ipswich has just announced the cast for their upcoming rock ‘n’ roll pantomime Jack and the Beanstalk, which will play to in person and livestreamed audiences from 25 November 2021 – 8 January 2022.

Jack and the Beanstalk, written by New Wolsey Artistic Director Peter Rowe and directed by Kate Golledge, is billed as a “rock ‘n’ rock panto” that features a cast of multi-skilled actor musicians presenting a glorious mash up of pantomime and pop concert. The production will feature classic and beloved elements of pantomime combined with live performances of classic rock and pop songs including Hit The Road Jack, Lady Marmalade, Get Offa My Cloud and Go Your Own Way.

Following the critically acclaimed success of the theatre’s hybrid pantomime offering The Snow Queen last year, which was “adored” by New York Times critics Alexis Soloski and Elisabeth Vincentelli, this year’s offering will once again include interactions with audiences at home, participation and shout-outs, and the chance to supply a prop during the show.

Join Jack’s adventure as we find that Dame Dolly Durden’s family farm has fallen on hard times – Squire Snuffbox is demanding the rent and Giant Blunderbore, with his wicked sidekick, Fleshcreep, is terrorising the land. There’s only one thing for it – Jack will have to sell their last remaining cow, Bessie. But when Jack comes back from the market with nothing more than a bag of beans it looks like the Durdens are done for. Then up pops Fairy Aubergine, up jumps a gigantic beanstalk and Jack is soon on his way up too, battling giants, rescuing the family farm and romancing the Squire’s spirited daughter, Jill.

The cast for Jack and the Beanstalk are: Nicola Bryan (Sweet Charity) as Fleshcreep, Joe Butcher (Buddy – The Buddy Holly Story) as The Giant, Daniel Carter-Hope (Made In Dagenham) as Squire Snuffbox, James Haggie (Jesus Christ Superstar) as Billy, Natasha Magigi (Don Quixote) as Fairy Aubergine/Gemima, Daniella Piper (The Secret Garden) as Jill, Steve Simmonds (Assassins) as Dame Dolly Durden and Neil Urquhart (Bicycle Boy) as Jack. All other roles are played by members of the company. 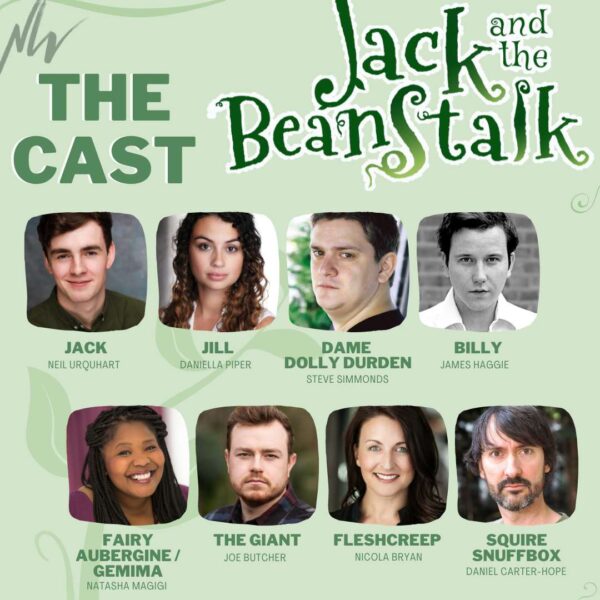 Tickets for in person audiences begin from £12 with livestream tickets at £25. Tickets can be purchased at wolseytheatre.co.uk.