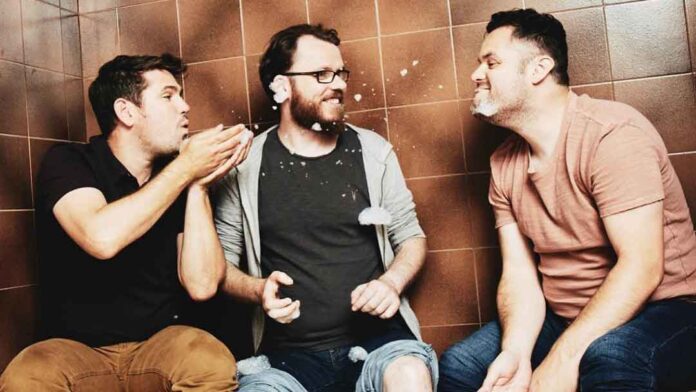 Surrounding themselves with sources of comfort and escapism after a tumultuous year, English indie-pop band Scouting For Girls release their new studio album Easy Cover – a collection of 11 tracks celebrating their broad array of musical influences.

Going back to the music and culture of their childhoods in the 1980s, the band regrouped during what should have been a summer of festivals to curate a joyful album of 80s covers, alongside some incredible new, original tracks inspired by the music of the era.

The result – a glittering LP full of solid gold bops from the bands’ favourite musical memories, from Tears For Fears, The Waterboys, Cyndi Lauper, Whitney Houston and Phil Collins. “We’re not trying to do justice to these songs- that’s impossible! We’re just trying to have fun and take them out on the road to give people the night out they deserve after 2020.”

Easy Cover (inspired by Phil Collins’ “Easy Lover”) was originally intended as a rather sedate, acoustic EP before frontman Roy Stride decided to shelve the project – reminding himself that Scouting for Girls should never try to be too serious or clever. Then, during lockdown, Roy found himself with spare time and an empty studio. In need of some serious cheering up, he reopened the recording sessions, envisaged playing the songs live and stripped away anything that was either too earnest or pretentious.

“It was on cassette and I was strapped into the back of my Dad’s car and we were going to the sweet shop. I must have been about 6. When lockdown came in 2020 I found comfort in nostalgia reworking these tracks that reminded me of my childhood. Coincidentally, Tears for Fears were also the last band I saw before lockdown. I took my Dad, 30 years on from him introducing the band to me, and it was the first time we had both seen the band live. They were magnificent.”

Throughout Scouting For Girls’ career, the band have sold over two million albums, two million singles, been nominated for 4 Brit Awards as well as an Ivor Novello, had four top ten singles, sold-out Wembley Arena, The Royal Albert Hall and, most recently, sold-out two nights at The London Palladium.

Easy Cover is set for release April 23rd, alongside a huge UK tour for Autumn 2021. Dates below. tickets are onsale now at www.gigsandtours.com