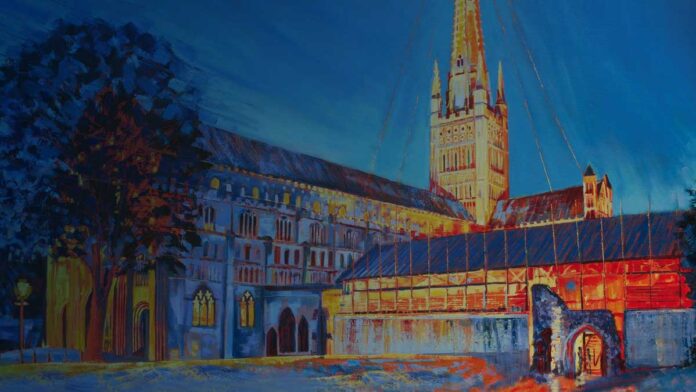 Norfolk’s Hostry Festival is searching for a young talent to star in a rarely-performed Peter Ustinov play which will be the central production of its 10th anniversary celebrations this autumn.

Running from October 16th to 31st this year, with plans to adapt should Covid restrictions and social distancing still be in place, the festival officially launched in 2011 having staged its first-ever production in the Hostry of Norwich Cathedral the previous year. This year, it celebrates a decade of original programming ranging from high profile guest speakers, concerts, drama and dance performances and exhibitions.

At the centre of this year’s programme, which will be announced in July, will be the Norfolk premiere of Beethoven’s 10th, a play penned by one of the country’s favourite actors, renaissance man Sir Peter Ustinov.

Originally planned for the 2020 festival, which was postponed due to the pandemic, it is reprogrammed for 2021 retaining its cast who will be joined by new additions including a young male actor yet to be chosen.

Auditions will be held for a young male actor of African/Afro-Caribbean & Caucasian mixed heritage to play the juvenile lead role Pascal Fauldgate – a youthful composer who meets his father’s icon, Beethoven, when the great maestro is transported through time and lands in Pascal’s family home in 2021.

He will act alongside Jamaican-born actress/singer Milly Jupp, who plays his mother. In addition to being a seasoned actor and opera singer, Milly is an award-winning entrepreneur who also runs Milly J Shoes on Tombland in Norwich. Also in the cast is festival actor Neil Auker, while Dylan Baldwin takes on the title role.

Artistic Director Stash Kirkbride said: “The actor cast as Pascal will be working with actors of real calibre and experience, this will be sure to help develop his skills set in a fun, supportive, yet disciplined environment. This casting call out across the county is also in-line with our new festival Open Door workshops, starting in Autumn of this year, designed for us to engage with yet more people of all ages interested in being a part of the festival, both on and off stage.”

The festival is also currently in negotiation with the Beethoven Museum in Bonn, Germany, to arrange a Live Streaming of the play from the new Hostry Festival website which launches this Spring.

Requirements for the role of Pascal:

Submissions must be made by May 1, 2021, to artistic director Stash Kirkbride at stashkirkbride@hostryfestival.org

The play will run from October 25th to 31st. Rehearsals will be Monday – Friday 6:30pm to 10pm nightly from Monday 6th September through until Saturday 30th October 2021, with the role of Pascal being called 3 nights a week for first 4 weeks, then 5 nights a week for all of October.

Rehearsals are Underway for Around the World in Eighty Days!