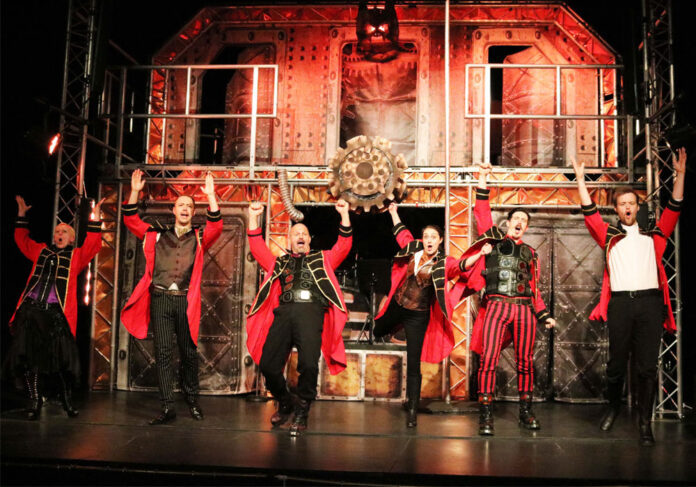 Comedy Shakespeare company Oddsocks Productions return to the stage with The Comedy of Errors from Thursday 10th – Saturday 12th June 2021.

In March 2020, Derbyshire based company, Oddsocks Productions, were about to celebrate thirty-one years of touring nationally and planning a three-month long tour. Then, the pandemic hit and everything was put on hold, the future seemed bleak. Now, thanks to public donations and support from the government’s Cultural Recovery fund Oddsocks Productions is delighted to be back in business and touring their postponed production of The Comedy of Errors.

Creative Producer Elli Mackenzie explains “It’s been a very strange year and whilst we have thankfully remained physically well, our future was rocked at its core as all our income ceased immediately.  Thanks to our loyal audience, the organisers at the venues we tour to and the financial support we have received via Arts Council England, we are back.  We have had to adapt to keep going and one of the changes is that I am back in the summer production appearing alongside my husband and Oddsocks director Andy Barrow. It has been twenty years since we have toured together and I am really looking forward to being back on stage working with him”.

Joining company founders Andy and Elli is Oddsocks regular Joseph Maudsley, who has appeared in many Oddsocks shows since his debut in Julius Caesar in 2012. He went on to play Ratty in The Wind In The Willows, Little John in The Adventures of Robin Hood and Benedick in Much Ado About Nothing before taking a break to tour the U.S. in Potted Potter in recent years.

Every year Oddsocks delights audiences with its inspired approach to Shakespeare’s plays and their trademark interactive style. The Comedy of Errors with its fast-paced slapstick antics and hilarious storyline is perfect for the Oddsocks treatment.

A servant and mistress from far off Syracuse arrive in Ephesus in search of their long-lost twin siblings.  In no time at all they are trapped in a terrifying chain of chaotic events. Harangued by hapless husband and a gold-digging gigolo, challenged by a jeweller seeking justice and damned by a demonic doctor, the terrified twosome run headlong into a climactic happy ending which defies all probability. A summer delight not to be missed!

“This is ensemble playing at its most compelling” – THE STAGE ★★★★

Tickets are on sale now at www.theatreroyal.org.