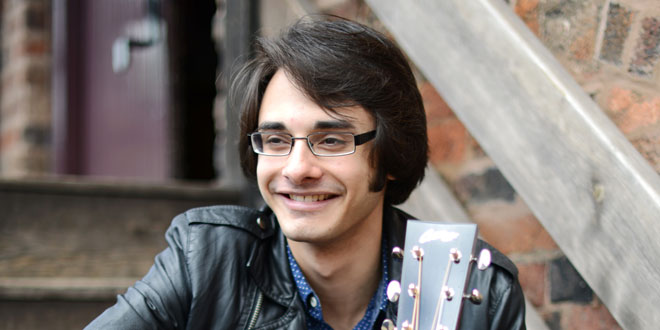 Gaining critical acclaim from the national press and his peers, Sunjay is one of the UK’s brightest young stars.

“An amazing picker, a must see.” – Terry Reid

“He’s a wizard on the guitar!” – Vin Garbutt

“Quite a few of these songs I have been singing & playing since I was about 5 years old. My dad taught me Buddy Holly songs when I first started playing guitar.  Pretty soon I realized that finger-picking the guitar looked much better than strumming. That was my introduction to the blues, although I don’t think I would have been able to define ‘Blues music’ at the time. There was something about that kind of music that intrigued me. It’s funny to look back now and to realize that I knew very little about the content of the song!”

In 2016, Sunjay will be sharing the stage with Pentangle,

“Black and Blues is a testimony to the skill and talent of Sunjay who is without doubt one of the slickest dudes to sit behind a guitar. He sounds cool, plays cool, looks cool so much so you almost expect a little light to come when he opens his guitar case.” Folkall.Blogspot.

Grapevine Magazine was first published in 1991. The small Editorial Team, based in Ipswich, Suffolk collate information about live entertainment across East Anglia for the magazine's well known listings. In addition the team publish reviews and interviews on all forms of entertainment. Send your PRESS RELEASES to [email protected]

First 2020 Gig For Folk Rock Band on the Waterfront

We come in the ages’ most uncertain hours and…