The Lion, The Witch and The Wardrobe

No wonder this show has been a smash hit and credited with an acclaimed production – it truly is a stunning and magical performance, so much so, it sits on the top of my list of favourite performances – ever. It was magnificent!

It’s a well-known wonderful story however this stage version is able to recreate the fantasy and the magic in an incredibly enthralling way. Everything about it was thought out with intricate detail and executed to the next level of precision. The production quality was top of the leader board.

The main cast included Samantha Womak as The White Witch and Chris Jared as Aslan, who played their characters with ice coldness and deep warmth, respectively. Shaka Kalokoh as Edmund, Robyn Sinclair as Susan and Ammar Duffus as Peter were wonderful to watch and Karise Yansen as Lucy was a delight as her childish innocence and pure heart were portrayed perfectly.

The ensemble played a variety of characters but they were also the props and the stage hands moving props about to create the scenes, but not in the ordinary way, the flow of the movements were creating the magic and the illusions of the scenes. Plus, I need to add, most also were the music and sounds. Instead of an orchestra to accompany the show, these actors were playing on stage, while still acting and moving. This meant all the music for the play, incidental music, background, foreground music, the sounds and the songs was completely integrated into the scenes. It enhanced the show to another horizon.

There were a couple of songs through the show, however it is not a musical. The songs suited the scenes and worked exceptionally well. 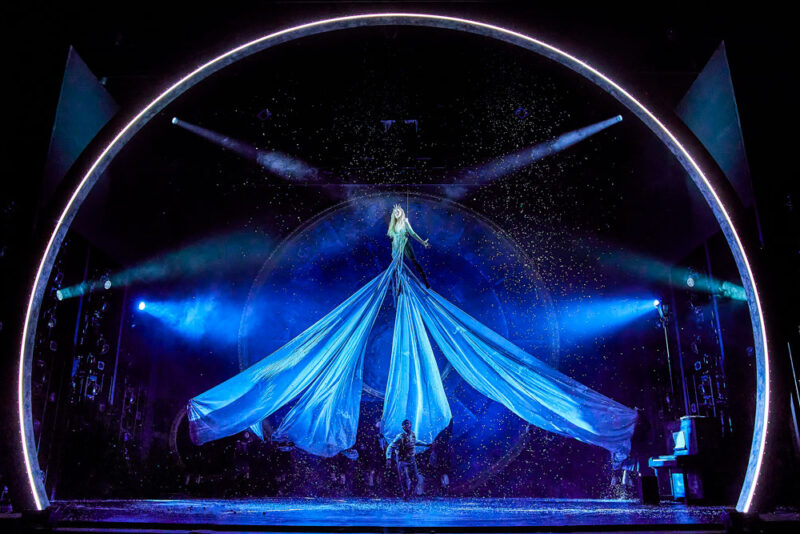 The set, the props and the costumes were fantastic. Many very simple, yet the position, the lighting and how they were carried and assimilated was creative and inventive. It created an amazing production. For example, the Witch had long trails on her dress which were used to create her being larger than life as she was hoisted up into the air. The conversion of going through the dark wardrobe full of fur coats and into the snowy world of Narnia was magical. The Witches minions were dark, nasty and scary as they crawled around the stage.. so many things. It’s very difficult to describe what a feast for the eyes it all was and I do not want to give any spoilers.

Very much a family show and the children in the audience were completely enraptured, however you do not need a child as an excuse to watch this show. It was imaginative, creative, innovative, charming. An utter delight and a must see.