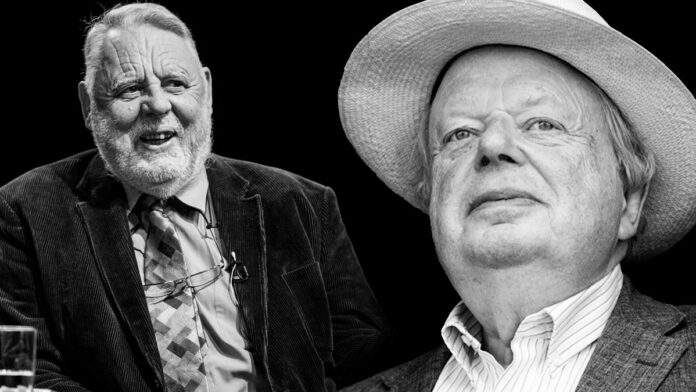 English television, radio journalist and broadcaster, John Sergeant is one of the foremost journalists and political experts in the UK, he will be in conversation with his friend Terry Waite CBE, English humanitarian and author, for a fascinating and fun evening of conversation at Theatre Royal Bury St Edmunds on Sunday 20 June – a great gift for Fathers Day!

John Sergeant started his journalism career as a correspondent for the Liverpool Echo where he worked for three years before joining the BBC as a radio reporter in 1970. He joined the international desk, covering stories in over 25 countries and working as a war reporter in Vietnam and Israel and reported the death of the first British soldier during the Troubles in Northern Ireland. He later covered the opening sessions of the European Parliament and became a Political Correspondent in 1981. John was the BBC’s Chief Political Correspondent from 1992 to 2000 and the Political Editor of ITN from 2000 until 2002.

He studied Philosophy, Politics and Economics at Magdalen College, Oxford. Whilst there he performed in student comedy revues and after graduation he starred with Alan Bennett in a series of sketch shows on the BBC entitled On the Margin and wrote comedy scripts himself. He can now regularly be seen as a guest on comedy panel shows.

John also won the hearts of viewers in 2008 when he appeared on Strictly Come Dancing with partner Kristina Rihanoff. Although he repeatedly finished bottom of the score board, the public consistently voted to keep him in the competition until week 10. Following a farewell dance he was heard saying: “The trouble is that there is now a real danger that I might win the competition. Even for me that would be a joke too far”

In conversation with John will be Terry Waite CBE. Terry was the Assistant for Anglican Communion Affairs for the then Archbishop of Canterbury, Robert Runcie, in the 1980s. As an envoy for the Church of England, he travelled to Lebanon to try to secure the release of four hostages, including the journalist John McCarthy. In 1984, he negotiated with Colonel Gaddafi for the release of the four remaining British hostages held in the Libyan Hostage and was again successful. He was himself then kidnapped and held captive from 1987 to 1991 (1,763 days) the first four years of which were spent in solitary confinement.

Following his release, he was elected a fellow commoner at Trinity Hall, Cambridge where he wrote his first book, Taken on Trust, an account of his captivity in Lebanon which became a best-seller in the UK and internationally.

Terry decided to devote himself to study, writing, lecturing and humanitarian activities. His second book, Footfalls in Memory, a further meditation on his captivity in Lebanon, was published in the UK in 1995 and also became a best-seller. His most recent book, published in October 2000, Travels with a Primate, is a humorous account of his journeys with his former boss, Robert Runcie.

In January 1996, Terry became patron of the Warrington Male Voice Choir in recognition of the humanitarian role adopted by the choir following the Warrington bomb attacks. Since then, he has appeared with the choir for performances in prisons in UK and Ireland to assist in rehabilitation programmes. Prison concerts have become a regular feature of the choir’s Christmas activities.

He is patron of several organisations including Storybook Dads, a UK charity which allows prisoners to send recordings of themselves reading bedtime stories to their own children, to help stay connected to some of the 200,000 children affected by parental imprisonment each year.

With the lives that these two legends have led so far – this is one conversation you won’t want to end!

An evening in conversation with John Sergeant and Terry Waite CBE will be at Theatre Royal Bury St Edmunds on Sunday 20th June at 7.30pm. Tickets are on sale now at www.theatreroyal.org.

This is a fundraising event in support of Theatre Royal Bury St Edmunds.
Registered Charity Number: 242977.