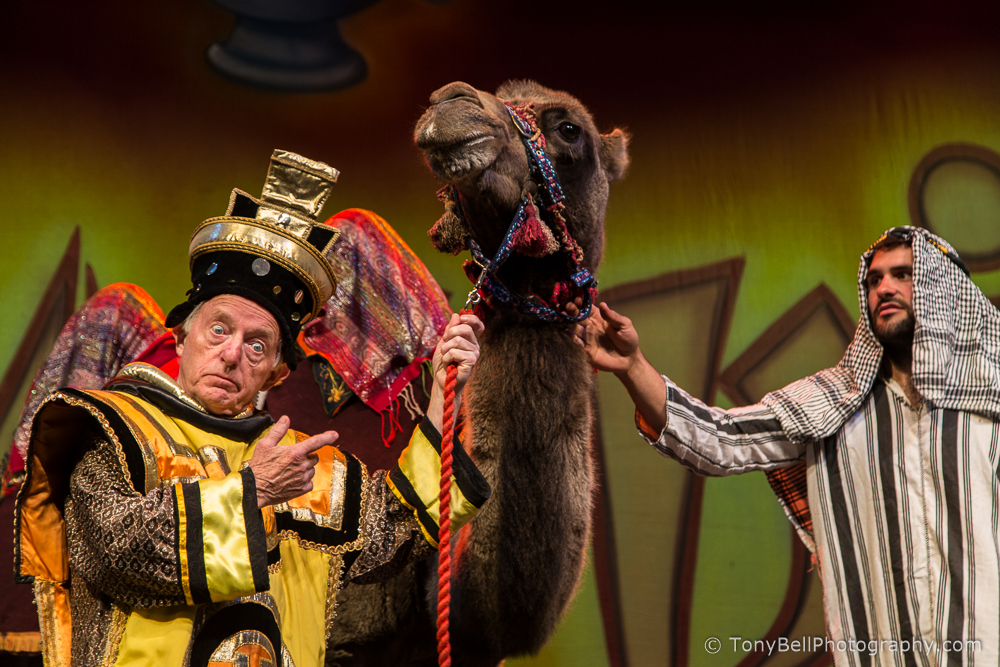 Panto Fun at The Regent

A photo call at Ipswich Regent Theatre to promote their Christmas Panto was always going to be fun.  The photographers assembled on the stage of Aladdin deciding what shots they’d like to get then someone asked where they should place the camel.

Us photographers and journalists tend to be cynical animals by nature and most of us assumed this was a merry jest by a member of the production team.  Oh no it wasn’t – c’mon you can’t write a panto piece without that line!  Moving swiftly on by putting that behind us (!) yes, the team at Ipswich Regent had in fact organised for a camel, names Elvis, from Oasis Camel Park in Halesworth, the only such park in the UK.

Sadly Elvis won’t be performing in the show itself, negotiations stalled over his vegetarian snack requirements and he took the hump.  So what has producer Guy Pascall got lined up for our festive entertainment?  “We’ve got a dazzling show lined up this Christmas at the Ipswich Regent. Aladdin is going to be full of magical illusions with Paul Daniels bringing his unique talents to this year’s pantomime. Audiences are in for a visual treat, with a flying carpet, a magic lamp, a wizard and the most outrageous Genie. There’s also the love story between Aladdin and Princess Jasmine, as well as side-splitting comedy routines, high-octane dance numbers and the most talented panto cast in the country.”

The pantomime will feature a fantastic live band and will be packed with a host of top TV stars including, as Guy mentioned: the most successful TV magician of the 20th century Paul Daniels as The Emperor but also platinum-selling recording artist and X-Factor runner-up Andy Abraham as Genie of the Lamp, Disney Channel Presenter and West End leading lady Samantha Dorrance as Princess Jasmine, Chris Stanton ‘Mr Flatley from CBBC’s hit children’s TV show M.I. High’ as Abanazar, hilarious impressionist and Britain’s Got Talent semi-finalist Andrew Fleming as Wishee Washee, Ciaran Joyce from ‘CBBC’s Tracy Beaker & Young Dracula’ as Aladdin and, of course, the lovely Debbie McGee as Slave of the Ring.  Stephen David will take on the role of Widow Twankey, his sixteenth consecutive year playing a panto dame.  Watch out too for an arresting performance by Town102 breakfast presenter Wayne Bavin as PC Pong!

Visitors to Ipswich town centre on Tuesday were suitably surprised to see the entire cast AND Elvis walking through the town promoting the show – early evidence of how seriously the cast are taking the Panto at The Regent.

[shareprints gallery_id=”106974″ gallery_type=”squares” gallery_position=”pos_center” gallery_width=”width_100″ image_size=”medium” image_padding=”5″ theme=”light” image_hover=”false” lightbox_type=”slide” captions=”true” comments=”false” sharing=”false”]Aladdin runs at Ipswich Regent from 19th December 2015 – 3rd January 2016 (the show’s run has been extended from today due to the huge demand for tickets). Tickets are on sale now and already selling fast, so ‘make your wishes comes true’ and call the Ipswich Regent Box Office on 01473 433 100 or book online at www.ipswichregent.com

Rura at The Apex

Peter Duncan to star in ‘The Dame’

Accessible Performances at The Theatre Royal

An Audience with David Gant

When it’s Murder on Stage… Curtains